A 38 North exclusive with analysis by Nathan Hunt and Jack Liu.

On June 17, more than four months after North Korea launched the Kwangmyongsong-4 (KMS-4) satellite, the Japanese Defense Ministry reported the discovery of the second half of the launch vehicle nose fairing on a beach in Yurihama, Tottori Prefecture, about 1000 km southeast of the Sohae Satellite Launching Station. The first nose fairing was recovered soon after the February 7 launch just off the coast of the South Korean Jeju Island (about 740 km south of Sohae). An assessment of photographs of the latest debris and the KMS launch vehicle used in the February 7 launch, suggests they match, although it is remarkable that the fairing material was buoyant enough to drift to Japan.

Figure 1 shows the relationship of the two nose fairing pieces on the KMS-4 space launch vehicle (SLV). Faring A is the piece recently recovered in Japan, and Fairing B was the piece recovered near Jeju Island shortly after the February launch.

Figure 2 is the KMS-4 prelaunch image of the nose fairing released by KCNA. The attachment points match with those on the debris.

Figure 3. Fairing A washed up on beach in Japan.

Figure 4 shows the nose fairing recovery locations relative to North Korea’s Sohae Satellite Launching Station and the ground track of the KMS-4 launch. Fairing A apparently drifted a considerable distance from where Fairing B was recovered. This brings to question the buoyancy of the fairing. The material used has not yet been reported, but if it is predominantly metal, it should have sunk instead of being carried by the currents. It is worth noting that while the fairing appears to be metallic, it is common for payload fairings to incorporate thermal or acoustic insulation on the interior. If insulation blankets or coatings were used, they might have been sufficiently buoyant to keep the entire fairing afloat.

Figure 4. Trajectory of the KMS-4. 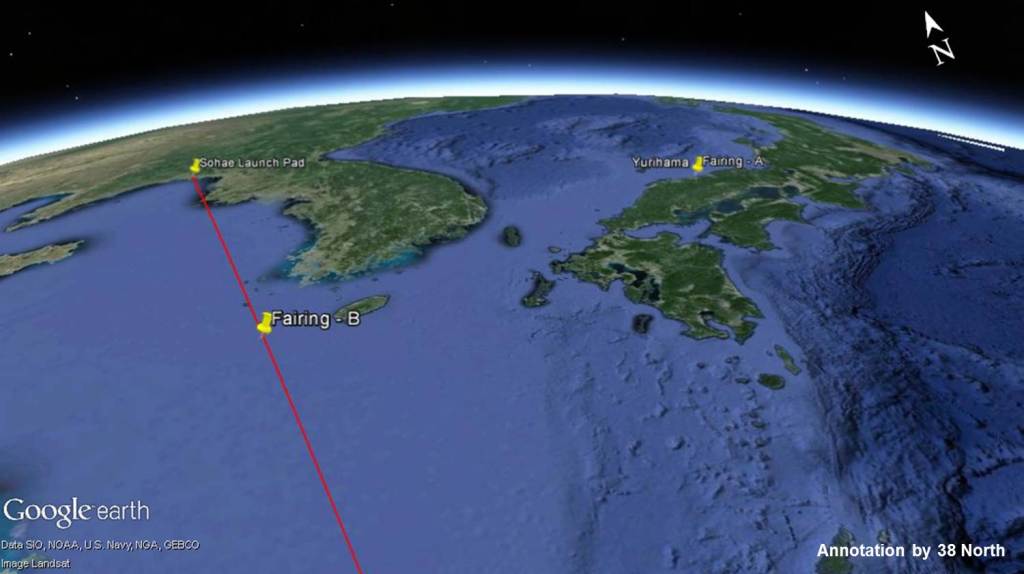