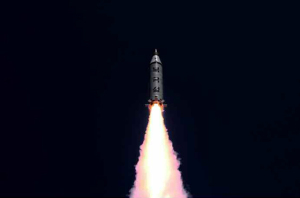 The success of North Korea’s latest submarine-launched ballistic missile (SLBM) test suggests the program may be progressing faster than originally expected. However, this does not mean it will be ready next week, next month, or even next year. Rather, the pace and method of the North’s SLBM testing would suggest possible deployment in an initial operational capability by the second half of 2018 at the earliest. Given Russia’s history of SLBM development—a model Pyongyang seems to be following—even after two years and 12 tests of varying degrees of “success” after its first successful launch from a submarine, there were still glitches to be found and fixed. The North Koreans may skip some of these tests, but rushing development almost certainly sacrifices reliability, and fielding inadequately tested or unreliable missiles could result in sunken submarines—a high price to pay when the North has only a single ballistic missile submarine of limited capability.

Furthermore, while North Korea’s single GORAE-class submarine could theoretically be used to field an SLBM, Pyongyang could not count on a single prototype submarine with one to two missiles to carry out wartime missions. Such a deployment would be more of a bluff than a game-changing threat. Moreover, the submarine has only been put to sea for short periods in coastal waters to verify basic seaworthiness and conduct a few launches. If it is meant to be an operational boat, it will need realistic testing in operational environments, such as exercises with its surface fleet. Furthermore, the North will almost certainly want to refine this design before trying to deploy an operational system.

While 38 North has reported on the North’s building up of infrastructure to construct new submarines—upgrading, modernizing and erecting new construction halls at the Sinpo South Shipyard—so far no information is known about whether actual submarine construction has begun. A new submarine could probably be built within a two to three year time frame, but the likelihood of building new models without further testing and refinement of the experimental GORAE-class seems low.