The Gossip Mill: How To (SP)Read a Rumor About North Korea 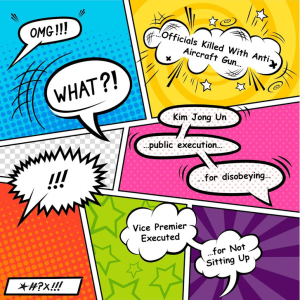 This week, Seoul’s Joongang Daily reported that Kim Jong Un executed two top officials: Hwang Min, former agricultural minister, and Ri Yong Jin, who had a “senior position in the education ministry, possibly as high as minister level.” These high level executions were said to have been for such crimes as “nodding off during a meeting with Kim Jong Un.”[1] The article even cited anti-aircraft guns being used to conduct the execution.

The South Korean Ministry of Unification (MoU) then announced the following day that Kim Yong Jin, the vice premier for education, was executed, giving the reports more credence. (“Ri Yong-jin” was an error, according to a statement given to the press by the MoU.[2])

Is this new report of elite executions true? Who knows. But in trying to distinguish truth from fiction about rumored happenings in North Korea, it is worth taking a moment to consider how news about the North is produced in South Korea and picked up by global news organizations. There are three relevant issues: South Korea is in a state of war and competition with North Korea; journalists in South Korea are very comfortable basing stories off of single, anonymous sources; and foreign media organizations are desperate for page views and thus happy to repeat dramatic rumors about the DPRK. In this context, one should be suspicious of rumors from this information supply chain, which encourages sensationalism at every step and offers little reward for ensuring credibility.

The state of war on the Korean peninsula creates a special role for speculation in South Korea about North Korea’s elite. This may seem an obvious point, but the conflict-based relationship of the two Koreas underpins all rumors about the North. Media scholar Jeremy Tunstall explains:

[W]ar is the biggest source of rumor because the multiple individual crises of war produce the greatest demand for information. An extreme disequilibrium between the supply of, and the demand for, news occurs under military occupation when institutionalized news media are controlled and censored.[3]

The extremely closed nature of North Korea—behind enemy lines, as it were—ensures that there is always a lack of information coming from north of the DMZ. Yet at the same time, its unique political culture and geostrategic importance to the region ensures there is always high demand for more.

North Korea’s opacity makes it seemingly easy to start rumors about what may be taking place there, as corroboration often seems too difficult to pursue. For this reason, many stories about North Korea are generated from South Korean intelligence sources. This information is filtered through actors who are in some way involved in the conflict with North Korea: no South Korean government actor or institution can really be neutral when the country is still constitutionally locked in a competition with Pyongyang.[4]

Journalists in South Korea are also citizens of a state that is still at war with North Korea. The press is “free,” but reporting on North Korea is subject to the South’s Cold War-era national security law,[5] and is often biased towards the government’s positions. As in other media markets, South Korean journalists have to rely heavily on official sources simply to create news content. This is all the more true for news about North Korea.

Finally, politics aside, the South Korean press is also simply very comfortable with news stories based off of single, anonymous sources. This is a major professional difference between South Korean and most Anglophone media. There is significant unease about using off-the-record sources in the American journalistic tradition (somewhat less so in the British media). It is considered a last resort of sorts, usually only acceptable in exceptional circumstances and often requiring supporting evidence, including and especially additional sources. In South Korean media, however, this is not the case. Single, anonymous sources are regularly cited, especially with regard to North Korea-related news. These sources—usually from the South Korean government or military—require no verification or corroboration to be included in a news story, or to actually form the foundation for said story.

One former foreign editor describes the situation in general terms, saying a “specialty of Korean journalism is the no-source story.”[6] One reason for this is that getting on-the-record sourcing is culturally difficult in Korea, where interviewees often want to avoid causing conflict or being held accountable. Because of this, he explains, “[T]here is a lot of journalism that you basically can’t do in Korea. You spread rumors instead…”[7]

What this means for readers, however, is that news based on the word of single anonymous sources should be viewed with extreme caution—especially on otherwise unreported events in North Korea. When an institution such as the South’s National Intelligence Service (NIS) or Ministry of Unification is willing to go on the record about a purge or reshuffle, more attention can be devoted to the story on which the source agency has staked its reputation. That happened this week, when the MoU released a statement following the Joongang Ilbo story.

In the current global media environment, however, journalists everywhere are under pressure to create a lot of content that drives clicks. This leads to “churnalism,” when media outlets repeat and repackage news reported elsewhere to get those clicks. Reader interest in North Korea—and especially in salacious news—is high, making it very hard for journalists and editors to resist repeating a rumor when they are far from the story and thus less accountable for it.

The first time it was reported that Kim Jong Un was using high-powered weapons to execute people is an interesting case. In March 2012, the Chosun Ilbo quoted “a South Korean government source” as saying that Kim Chol, a deputy defense minister in the Korean People’s Army, “was put in front of a firing squad for being drunk during the mourning period … he was executed using a mortar round in line with Kim’s orders to leave ‘no trace of him behind, down to his hair.’”[8]

This article gained little traction in the English-language press until October, when a South Korean lawmaker testified in front of the ROK National Assembly that Kim Chol had been executed “by firing squad.” The briefing was covered by the Korean press[9] and the news ran later that day in various English-language outlets. All of these reports, however, contained the story of mortar-round executions, the more salacious and exciting version.

The New York Daily News, for example, simply headlined it, “Kim Jong-un executes official with mortar round.”[10] London’s Daily Mail went with a more exciting headline: “North Korean official is executed by MORTAR SHELL for drinking during 100-day mourning period for late ‘Dear Leader’ Kim Jong-il.” The latter headline included the subtitle, “During the 100-day mourning period North Koreans were forced to abstain from pleasurable activities—including drinking.”[11] (This supposed ban on drinking certainly did not take place. If you’ve been to either Korea, you can imagine that such a rule would not be considered.) Many reports in English quoted the Telegraph’s version of the story, which claims the mortar execution was “for reportedly drinking and carousing during the official mourning period.”[12]

Rumors followed a similar trajectory this week, when Reuters covered the Joongang Ilbo story; Reuters was in turn cited by other news outlets, adding gravitas and credibility to this secondary reporting.[13][14] When the Ministry of Unification confirmed that they had information of Kim Yong Jin’s execution by “firing squad” the next day, the “anti-aircraft gun as execution weapon” story was already out there, filling our news feeds.

Interestingly, the South Korean government also added information about two other officials who they claimed have been sent for re-education as well as the curious detail that Kim Yong Jin’s undoing was “not keeping his posture upright at a public event.”[15] This is a claim that feels dubious in both its accuracy and triteness.[16]

Finally, sometimes even official on-the-record statements are wrong, such as when the National Intelligence Service reported that General Ri Yong Gil had been executed in February 2016: he later appeared at the Worker’s Party of Korea Party Congress in May. Of course, sometimes they’re right: the NIS did break the news of Jang Song Thaek’s arrest in 2013.

When assessing media coverage of North Korea, we face a black-box state with a capricious legal system, its enemy and competitor state whose journalistic tradition is comfortable with anonymously-sourced rumors, and an international press that is under-resourced and has to churn out stories at a high rate. Add to that the fact that stories about North Korea get a lot of clicks and it’s no wonder we’re inundated with dramatic rumors about happenings north of the DMZ.

Consequently, as we think about rumors about North Korea, we need to take all these caveats into account and temper our conclusions appropriately. For those trying to parse which rumors are true and which aren’t, it might be best to think of them as analogous to Schrödinger’s cat. They’re probably true. But also probably not.

[4] Article 3 of the ROK constitution claims the whole peninsula as its jurisdiction.

[5] South Korea’s National Security Law, enacted in 1948, criminalizes “anti-state” activities, especially actions that appear to be pro-North Korea. It has often been used to silence criticism of South Korean policy toward the North as well.

[16] The word used, 자세 Ja-Sae, can mean posture or attitude.