Commercial satellite imagery from January to October 2016 indicates that the Tonghae Satellite Launching Ground on North Korea’s east coast remains in caretaker status. While construction efforts that began in 2011 were suspended in 2013,[1] routine activity continues, such as minor maintenance and the drying of crops.

No launches have been attempted from this facility since April 2009 and extensive repairs would be needed to reuse the old launch pad and gantry tower. However, with some maintenance, the engine test stand could likely accommodate testing up to Nodong-sized engines.

While it is unclear why construction at Tonghae was suspended in 2013, with adequate resource allocations, it would take roughly 12-18 months to complete the projects that were previously underway, and approximately another six months to be ready for future launches.

Construction of a new launch pad able to accommodate larger space launch vehicles began around June 2011 and progressed until April 2013, when work was suspended.[2] Commercial satellite imagery from October 14 indicates that nothing of significance has occurred since then, with the launch pad and associated fuel and oxidizer buildings still incomplete.

Construction of a new, larger horizontal processing building began in mid-2011 and was suspended in early 2014, leaving the building’s foundations and walls exposed. Construction of the adjacent launch control building started around April 2012 and proceeded quickly at first until it was also suspended in early 2014, just after the roof was completed. Satellite imagery from October 14 indicates that nothing of significance has occurred at either of these buildings since then, and a garden has been planted within the foundations of the horizontal processing building.

Figure 2. No significant developments at the horizontal processing and launch control buildings since 2014.

The construction campaign that began in 2011 also included upgrading the roads that service the facility. Initially, these narrow dirt roads had several very sharp turns and light bridges that were unsuitable for the movement of heavy construction equipment, rocket engines or space launch vehicle components. Improvements included widening at bends that could not be straightened, construction of straighter reinforced sections where possible and the laying of gravel. In addition, a new entrance bridge was built that eliminated a sharp turn, along with three new heavy-duty bridges and a new road leading to the larger launch pad under construction. As with the other facilities, work was generally suspended in early 2014. However, minor activity at the entrance bridge and the approaches to the bridge at Taepodong was observed in 2015. Imagery from October 14, 2016 indicates minor roadwork continues.

The existing facilities at Tonghae consist of a telemetry facility, range control building, horizontal processing building, launch pad with gantry tower, vertical engine test stand and a few small support buildings. Analysis of both natural color and color infrared images from October 14 indicate that neither the vertical engine test stand nor launch pad was used in 2016—and probably longer. The only significant activity observed at any of the existing buildings was roof repairs that began last month at the horizontal processing building. 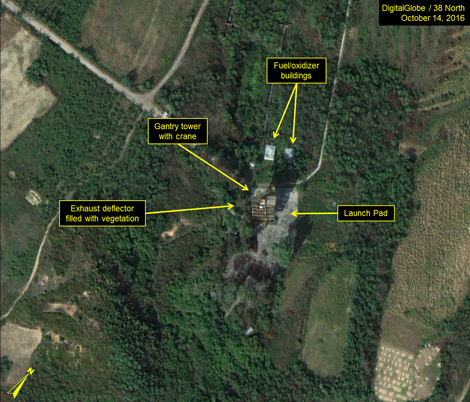 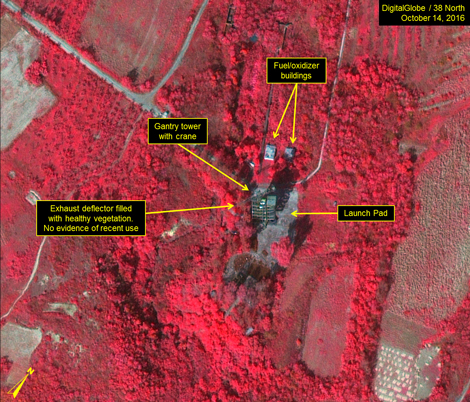 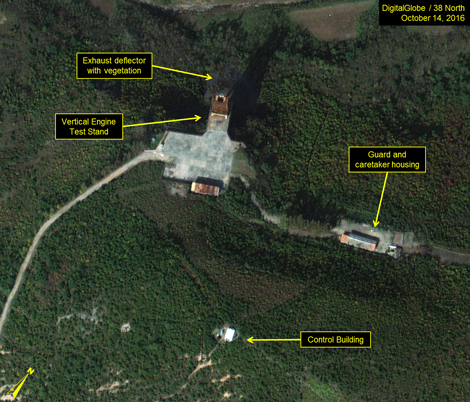 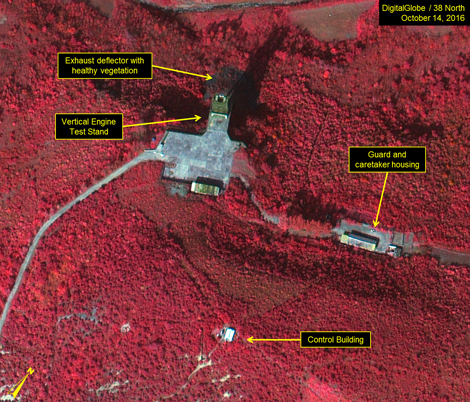 Timing and Future Use

While the underlying reasons for the suspension of construction activities in late 2013 remain unclear, a number are possible, none of which are mutually exclusive. These include:

Despite these delays, with adequate resource allocations, it would take roughly 12-18 months to complete the projects that were previously underway, and approximately another six months to be ready for future launches.

[2] Work may possibly have been suspended somewhat earlier in late-2012.