We at 38 North are always grateful for reader responses and critical commentary that can further the informed dialogue on the topics posted here. We appreciate the questions and comments by So Gu Kim on the recent analysis by Frank Pabian and David Coblentz of the Punggye-ri Nuclear Test Site. 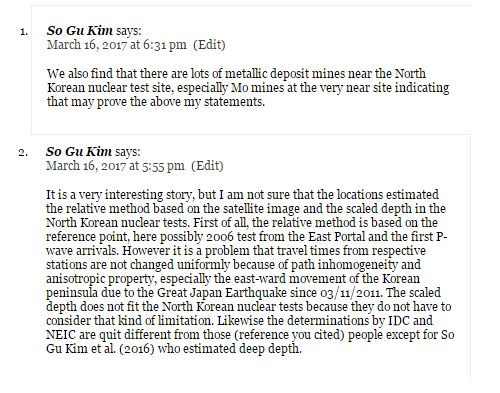 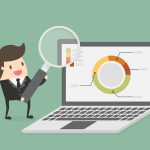 Nonetheless, we have consulted with the authors and stand by the view that the geo-positioning of the test event locations and their associated estimated depths underground were based on sound reasoning.

The seismological method for generating relative geo-positioning of nuclear test events based upon surface waves has been well developed and tested for almost half a century:

It requires a reference event whose signals are cross-correlated with those of another event in the same source area to obtain relative travel times to a given network. The location is computed relative to the reference event with an algorithm similar to body-wave location, except the depth variable is deleted.[1]

Technological refinements have improved accuracies from tens of kilometers down to a few hundred meters through more elaborate seismic arrays for detecting and cross-correlating underground nuclear tests at both regional and teleseismic distances. The resulting relative location plots (in the North Korean case, five recorded and acknowledged nuclear test events) occurred within close proximity to each other within the bounds of the Punggye-ri nuclear test site. The two 38 North posts by Pabian and Coblentz fully reference previous work involving this methodology with regard to North Korean nuclear testing at Punggye-ri.

The geolocations initially provided by the Comprehensive Test Ban Treaty Organization (CTBTO) and the US Geological Survey (USGS) were entirely seismically derived and seldom cross-correlated between events, and generally have large error ellipses (from above 10 kilometers, with the smallest being over two kilometers from Ground Truth). The CTBTO is proscribed from doing satellite imagery analysis. However, the USGS has recently refined its geolocation estimates for the five North Korean nuclear tests using a “Joint Hypocentroid Decomposition approach” as shown in a recently published poster (Figure 1).

Using commercial satellite imagery, the USGS has located all of the last four North Korean nuclear tests in the vicinity of Mt. Mantap and included an inset of the North Portal area and its large spoil pile (along with the new West Portal and support area). This suggests that the USGS believes this area was used to support those tests (as opposed to “mining” activity). The USGS Poster also shows that the first test in 2006 is isolated from the four subsequent tests that were clustered in an area that could only be served by the East Portal.

Neither the CTBTO nor the USGS have sought to further improve the precision of their event geo-positions by using relative location plots combined with analysis of electro-optical (EO) commercial satellite imagery, which locates test tunnel entrances and surface disturbances, or synthetic aperture radar (SAR) interferometrically applied to detect surface deformations. Those methods (used by multiple researchers as cited above by Pabian/Coblentz) empirically determined and fixed the “Ground Truths” of the last two nuclear test events under Mt. Mantap. Moreover, they provide a rational basis for the positioning of all relative location plots of the earlier tests, which occurred at the Punggye-ri Nuclear Test site beginning in 2006.

Thus, So Gu Kim’s point about tectonic changes arising from the Great Japan Earthquake of 2011 would not have in any way influenced the relative location plot of the first two events (in 2006 and 2009) that occurred prior to that earthquake. And that relative location plot had already made it possible to discriminate between the occurrence of the first event being supported via the East Portal and the second event via the (former) West Portal (now known as the “North” Portal).[2]

Regarding the depths issue, neither the CTBTO nor the USGS makes any effort to specify depth other than to say “Zero Kilometers” to signify that they are near the surface compared to naturally occurring earthquakes that occur significantly deeper.

That said, event depth is an issue that is the less resolved. As was pointed out in the above post by Pabian/Coblentz, one way to estimate depth is to take the known elevation of the tunnel portal and subtract the elevation of the terrain at the derived geolocation (as determined by the methodologies described above). This assumes a nearly perfectly horizontal tunnel (tunnels are generally engineered to slope very slightly upwards to facilitate excavation, e.g., empty spoil cars uphill, full spoil cars downhill).

So Gu Kim, et al., took a contrarian approach. That approach dismisses all the observable empirical ground-truth evidence described above (and in the previous Pabian/Coblentz 38 North article) in favor of a methodology that is based solely on an analysis of variations noted across the spectra of multiple seismic waves created by each nuclear test event. We are not saying that such an approach is invalid, only that the weight of the other available evidence leads to an alternative conclusion concerning the depths of the five events to date (and considerably less than the >2000 meters calculated by So Gu Kim, et al.) We accept the simplest explanation for the results and data that have been observed. It would not be worth the added engineering complications and costs to both excavate kilometers of tunnels under the steeply rising mountains, and then also drill down more than an additional kilometer to further over-bury these tests.

At Punggye-ri, the scaled depth formula is in no way invalidated by the evidence available to date. It is also reasonable to assume that the DPRK test engineers would be fully cognizant of that formula (given that it is publicly available), and those engineers would have at least considered it as a baseline against which they could then over-bury their tests (and 800 meters is sufficient to qualify as significant over-burial for a 15-20 kiloton test in anybody’s book).

Regarding the mining of molybdenum, we refer to an earlier post by Joseph S. Bermudez Jr., concerning recent developments associated with the mining of non-ferrous metals in North Korea. To our knowledge, there are no such deposits, mines or processing facilities within the perimeter of the roughly 100-square-kilometer Punggye-ri Nuclear Test Site. But we welcome any specific information to the contrary from media reporting, geologic maps and reporting, geolocation coordinates and/or satellite imagery of these deposits, mines and processing facilities.

Another report, by Hans Israelsson, “Location of the Jan 6, 2016 North Korean Nuclear Test,” is a useful reference compendium having some of the best information available concerning the geo-locations via relative locationing and the associated uncertainties through the first four tests. See: