On May 1, 2017, The Diplomat published an article by Damen Cook based on a report by Strategic Sentinel, which purported to show that the North Koreans had “constructed several military facilities on small islands surrounding the city of Sohae.” The methodology and conclusions in this report, however, demonstrate a lack of understanding of both North Korea’s military infrastructure and recent history.

Before writing this article, I approached Strategic Sentinel directly about the methodological errors and thus faulty conclusions. However, since this is potentially a politically-sensitive topic, I would like to publicly provide some corrections to their analysis, and some general tips to other researchers on how to improve analysis of North Korea.

In the Strategic Sentinel analysis, they suggested that a series of islands near Sohae (which is not a city) are being used for ballistic missiles (BM), anti-ship cruise missiles (ASCM), or surface-to-air-missiles (SAM); however, there is no credible evidence to support this claim. In fact, there is ample evidence to refute it.

First, if these islands were being used for missiles, we would expect to see some level of related support facilities or bases nearby, but none exist in this area. Additionally, North Korean coastal defense missile sites tend to be located on elevated locations that are higher than these tiny islands so that their search and targeting radars have better range. Finally, there is abundant open source evidence to support the conclusion that these coastal sites are just what the North Koreans claim they are: land reclamation projects for agriculture, salt farms and seafood production.

Below is a collage published by Strategic Sentinel in the original article for The Diplomat which shows the islands in question. 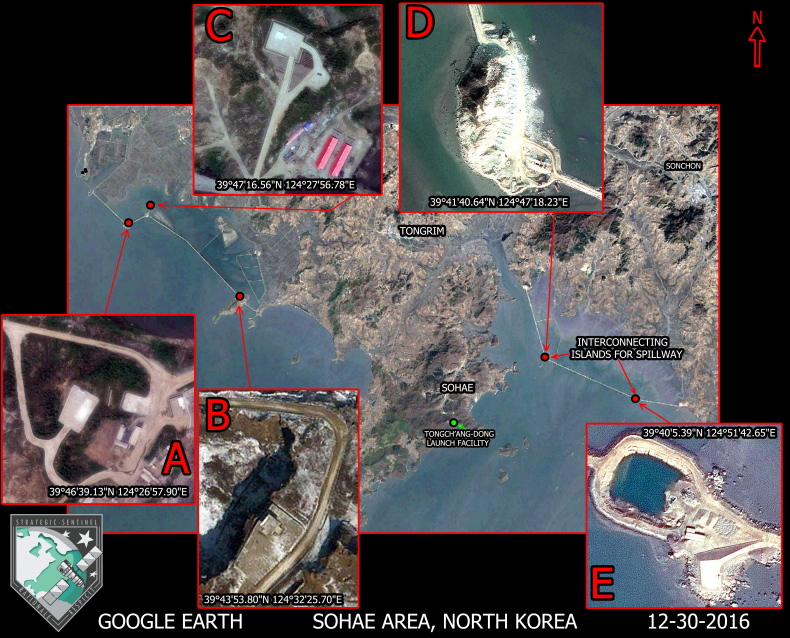 Based on this collection of Google Earth satellite imagery, the report first asserts that the coastal development projects on the eastern and western perimeter of North Korea’s Sohae Satellite Launching Station possess military installations for “offensive asset deployment.” However, all the specific possible kinds of deployment the author identifies (BM, ASCM, SAM) are actually defensive in nature—presumably for the defense of the Sohae launch facility. So there are some inherent contradictions in the report’s own reasoning about the intended use of these “military positions.”

Second, a more fundamental problem arises. This graphic mislabels the town of Cholsan (the town closest to the Sohae launch facility) as Tongrim, a town which is actually seven miles north of the location featured on this map. Though this may be a simple labeling error, the inaccuracy has more serious implications for the research methodology. If Strategic Sentinel had looked up the names of the islands featured in his report and researched these names in North Korean media and publications, they would have discovered that thorough reporting of these two coastal projects (as well as dozens of others) have appeared in Rodong Sinmun, KCNA, Korea Magazine, and KCTV. The North Koreans have named these two projects the Taegyedo Tideland Reclamation (to the west of the Sohae launch facility) and the Honggondo Tideland Reclamation (east of the Sohae launch facility) projects. The extensive video and print coverage of these projects led most North Korea analysts to conclude at that time (correctly) that these projects were not military defense positions, but agricultural land reclamation projects that serve no obvious military purpose.

In fact, these types of projects are quite common on North Korea’s west coast (and Wonsan Bay on the country’s east coast), and they go back decades to a policy initiative launched by Kim Il Sung, the current leader’s grandfather. Some other “well-known” land reclamation projects include Pidansom Tideland, Tasado Tideland, Soho and Sokhwa Tidelands, Kumsong Tideland (Nampho), Unryul Tideland, Ongjin Saltern, South Hwanghae Youth Saltern, Kangryon Saltern, and the Ryongmaedo Tideland in Haeju.

Although the report highlights only the land reclamation projects closest to the Sohae launch facility, there is nothing unique about the construction of the Taegyedo and Honggondo Tideland reclamation projects to indicate they serve a special or unique military purpose. These types of projects literally span the entire west coast and all are constructed in one of two ways, either by building breakwaters to connect pre-existing islands, or by closing the mouth of a bay with an artificial breakwater. It is hard to argue that features at the Taegyedo and Honggondo Tideland projects are for the defense of Sohae when we can see similar structures all over the country.

So what exactly are these “military facilities” that Strategic Sentinel identifies on the islands? Kim Jong Il gave us the answer when he visited the Taegyedo Tideland Reclamation on July 5, 2009, and July 15, 2010, just before the project was officially “completed.” On the 2010 visit, we can see that the suggested “military facility” purported by Strategic Sentinel is not for the positioning of TELs or other military equipment. It is actually just a run-of-the-mill platform from which Kim Jong Il gave his “On the Spot Guidance.” Here is a screen shot of Kim Jong Il’s visit to the Taegyedo Tideland and a Google Earth image of the platform identified by Strategic Sentinel.

These platforms are ubiquitous in North Korea in rural places where one of the leaders has given “guidance,” and they are frequently turned into revolutionary sites and given monuments after the visits. Below is a monument constructed on a second platform on the Taegyedo Tideland Reclamation project that commemorates one of Kim Jong Il’s visits to the site.

Here are similar facilities at the Kwaksan Tideland Project in North Phyongan Province and the Kosan Fruit Farm in Kangwon Province on the east coast.

The examples could go on, but the point is that these platforms are commonly seen at these types of projects and have served only political purposes.

Another methodological problem with Strategic Sentinel’s analysis is the disregard for timing. Although the Honggondo Tideland project is currently under construction, Landsat imagery (available on Google Earth) indicates the Taegyedo Tideland breakwaters were basically completed by 1985—a full 15 years before work on the Sohae Satellite Launching Station even began. It does not seem plausible that the North Koreans would build a large, resource-intensive military defense facility along the coast more than a decade before they started construction of their second long-range rocket facility at Tongchang-ri.

In fact, the North Korean official news agency, KCNA, published a report on the completion of the project on June 30, 2010 (not 2012 as identified by Strategic Sentinel in a subsequent Los Angeles Times article that was published after we first approached them). But if the Tideland reclamation breakwater was completed in 1985, why did it take so long for the government to announce the end of the project?

When the severest tidal waves in hundreds of years hit the whole area along the west coast of Korea on August 21, Juche 86 (1997), the builders there waged a persevering struggle, rebuilding broken sections of Breakwater No.1 between Taedasa Islet and Kacha Islet and Breakwater No. 2 between Kacha Islet and Soyondong Islet and finally relinking Breakwater No. 3 on June 11, Juche 94 (2005) and finishing the first-phase damming up project.

They built Breakwater No. 3 covering hundreds of thousands of square meters with feldspar through their patriotic devoted drive.

Landsat imagery also confirms that the breakwater was damaged by 1998.

Figure 8. Landsat imagery confirms the breakwater was damaged by 1998.

Of course this damage struck during the “Arduous March,” an era of economic collapse that led to the deaths of as many as 1 million people. As the national economy ground to a halt, progress on this project also stalled.

Analyzing North Korea is not easy, but there are basic steps researchers should undertake before making bold conclusions. In this case, Strategic Sentinel appears to have failed to do the necessary background work on these islands to make an informed assessment. As best as can be determined, it seems they looked at a few Google Earth satellite images (but forgot to look at the Landsat imagery) and drew conclusions based on pre-existing expectations.

When it comes to North Korea, this type of research is more common than not, and a myopic approach will lead anyone to incorrect conclusions. Drawing actionable conclusions on North Korea requires an all-source approach that should include: 1) satellite imagery (and more is better); 2) research of primary sources (in Korean if you can); 3) interviews with defectors; 4) interviews with industry/field experts; and 5) examination of declassified documents. Even with all this information the best researchers are still going to make mistakes, but hopefully fewer of them. It is hoped that the comments presented here will help improve everyone’s research going forward.

In closing, when discussing North Korea, it is often useful to embrace Occam’s Razor: “Among competing hypotheses, the one with the fewest assumptions should be selected.” Sometimes a cigar is just a cigar.