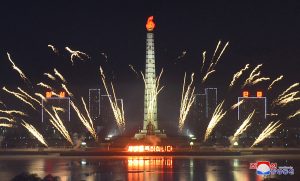 In his 2018 New Year’s Speech, Kim Jong Un acknowledges the effects of the toughest ever sanctions against North Korea but refuses to yield. His counter-strategy consists of a renewed emphasis on self-reliance, which includes the continuation of a cautious shift to decentralization in economic management, and hopes for economic cooperation with South Korea. The WMD program is hailed as a great success. However, the speech offers little evidence that the leader will now shift his focus to the economic side of his byungjin policy of dual nuclear and economic development. The annual olive branch to the South this time includes a direct reference to the Olympics, but the side-conditions of the offer may turn out to be problematic. It remains to be seen whether the thinly veiled threats throughout the speech are part of negotiation tactics or an indicator of a further destabilization.

In 2013, Kim Jong Un revived Kim Il Sung’s tradition of giving New Year’s Addresses, after these had for almost two decades been substituted by written New Year’s Joint Editorials under Kim Jong Il. These speeches are a summary of the official position on crucial topics such as the economy, foreign policy and ideology, and are studied meticulously by all North Koreans who, despite increasing Western interest in them, are the main audience for such announcements.

Last year (2017) was a tough one for North Korea. The economy suffered greatly from sanctions that openly targeted all of the country’s economic activities rather than focusing only on those related to the WMD program. China’s greater involvement in this effort has been particularly painful for Pyongyang. Despite justified Western doubts about the sincerity of Beijing’s efforts, North Korea can now sell less and thus earn less foreign currency than ever before. Banned export items include such key products as coal, seafood and textiles. North Korea can now also import less, in particular oil, a crucial resource that is not available domestically.

The foreign policy front did not look much better. Hopes that the unconventional attitude of the new US president would offer the chance for a breakthrough in bilateral relations were not fulfilled. In his 2017 New Year’s speech, Kim Jong Un addressed the United States directly, calling for a “courageous decision to roll back its anachronistic policy hostile towards the DPRK.” This did not happen. On the contrary, US President Donald Trump publicly threatened North Korea with annihilation and did not refrain from personal attacks on Kim Jong Un. Moreover, the US launched a massive and very successful initiative to crack down on North Korea’s international diplomatic relations. Embassies were closed or scaled down, diplomats were expelled.

Regarding soft power, too, North Korea had few reasons to celebrate. While Pyongyang denied any involvement in the killing of Kim Jong Un’s elder half-brother Kim Jong Nam in Malaysia in February 2017, few people outside North Korea were convinced. The assassination severely damaged the already bad image of the regime, making it easier for the US to gather international support for tougher sanctions. The death of the returned detainee Otto Warmbier, the US tourist who had been arrested in Pyongyang in 2016 and sentenced to 15 years hard labor for crimes against the state, brought about another massive blow to the North’s international reputation. This resulted in a ban on travel of US citizens to North Korea, cutting into the North’s tourism industry. The spectacular defection to South Korea of Thae Yong Ho in 2016, the second man in the London embassy, exposed the vulnerability of the regime to ideological challenges and increased internal mistrust.

Among the positive aspects of 2017, from a North Korean perspective, were the end of the conservative government in South Korea and the successful development of the WMD program.

The 2018 Speech and Outlook

The 2018 New Year’s speech reflects many of the aforementioned developments.

Kim Jong Un acknowledges the increased pressure on his country repeatedly by mentioning “the harshest-ever challenges” (유례없는 엄혹한 도전) or “difficult living conditions caused by life-threatening sanctions and containment” (생존을 위협하는 제재와 봉쇄). His strategy to react to this pressure is a renewed effort at a maximum level of self-sufficiency, as expressed by the common code words “independence” and “Juche character of the national economy.” He also provides a few details, such as the call to “drastically increase thermal power generation.” Such an approach makes good sense especially if seen in connection with the reduced Chinese imports of coal from his country. However, this will require massive investment into remodeling existing power stations or building new ones. It seems Kim Jong Un wants to delegate at least part of this burden to local levels when he says that “provinces should build power generation bases to suit their local features.”

Like in his 2017 speech, Kim also mentions the “C1 chemical industry,” pointing at efforts to develop processes for fuels and chemicals from resources other than crude oil. This could be an indication that the development of domestic crude oil reserves, as stressed by Kim Jong Un in his report at the 2016 Party Congress, is not proceeding as hoped.

Given the massive drop in tourism in 2017 following the various WMD tests, the death of Otto Warmbier and the strong reaction by the United States and China, it is remarkable that one of the projects Kim Jong Un names explicitly in his speech is the Wonsan-Kalma coastal tourist area. It seems that he expects a revival of travel to his country in 2018. A lifting of the US travel ban is unlikely, so where would all the extra tourists come from? One option could be South Korea, which now has a government that is still careful but less hostile than the previous two administrations. In his usual overtures to the South, Kim Jong Un indeed mentions several times that his country is open for travel, which could imply the desire to resuscitate the inter-Korean tourism project that had brought hundreds of thousands of South Koreans to Mt. Kumgang and to Kaesong between 1999 and 2008.

In terms of general strategy, Kim repeated his credo as announced in 2013: to develop nuclear defense and the economy at the same time. The big question for 2018 will be whether he has indeed declared victory on the WMD front and will now devote his efforts to economic development. His speech sends mixed signals and only little, if any, encouragement in this respect.

In a somewhat odd formulation that was most happily picked up by Western media, Kim proudly states that the mainland of the United States is now within range of his ICBMs with thermo-nuclear warheads and that he “always has the nuclear launch button on his office desk” (핵단추가 내 사무실책상우에 항상 놓여있다).

As usual, Kim added that the nuclear weapons program is only for self-defense and serves to deter the US from starting a military adventure. Kim uses an interesting formulation to make that point, concluding that thanks to this deterrent, the US would not dare to ignite a war “against me and our country” (나와 우리 국가를 상대로). This explicit inclusion of his own person as a potential target for an American attack is something new. It could be a response to the personal verbal attacks against him by Donald Trump (“little rocket man”) and potential plans by Washington and its allies of decapitation, a strike at the North Korean leader to bring down the regime. It could also be an attempt to signal to his people that their leader sees his destiny closely intertwined with theirs.

The attempt to use his own person in such a way is not new. It is worth remembering that the most dramatic passage of the 2017 New Year’s speech was an unusual personal appeal. In January 2017, Kim humbly informed his people about his “anxiety about what I should do” and how “I spent the past year feeling anxious and remorseful for the lack of my ability.” Kim promised emotionally: “On this first morning of the new year I swear to become a true servant loyal to our people who faithfully supports them with a pure conscience.”

In the 2018 speech, there is no trace of such humility. Kim presents himself as a strong and self-confident leader who is in full control of everything. The only personal remarks are those about the launch button on his desk and the threat against him and the country.

Is all this simply grandstanding, a declaration of victory and a precursor to a shift in the focus of Kim Jong Un to the peaceful part of his byungjin policy? The 2018 New Year’s speech does not offer much to support such hopes. On the contrary. While almost everyone seems to be fixated on the “button,” to me, the most disturbing sentence in the speech was: “The nuclear weapons research sector and the rocket industry should mass-produce nuclear warheads and ballistic missiles (핵탄두들과 탄도로케트들을 대량생산하여).” This does not sound like a leader being happy with having acquired a strong deterrent and ultimate life insurance, but rather indicates the intention to continue strengthening its WMD program.

If this analysis is true, it is now more important than ever to find a way to engage in direct talks with the North Korean leadership to contain the multiple security threats emanating from such a growing nuclear arsenal. Kim Jong Un has once more stressed in his 2018 speech that the nuclear program of his country cannot be negotiated away under any conditions. Given the restrictively high human costs of any military option, the West needs to more actively explore the options for at least putting a cap on the nuclear program by achieving a freeze.

In this regard, the offer to South Korea for peace and reconciliation is worth a closer look. The fact that the North Korean leader stresses such lofty goals in his New Year’s speech is not new, and doubts are in place regarding the sincerity of these offers. Note how, despite his nice words about how the Olympics are a great honor for the nation, Kim Jong Un is far away from accepting South Korea as an equal: “This year is significant both for the north and the south as in the north the people will greet the 70th founding anniversary of their Republic as a great, auspicious event and in the south the Winter Olympic Games will take place.” This is a slap in the face for Seoul; Kim tacitly ignores the fact that the people of South Korea will also celebrate the 70th anniversary of the foundation of their state this year.

Furthermore, it would be naive not to expect side conditions that are potentially unacceptable to South Korea and/or the United States during negotiations over North Korea’s participation in the Pyeongchang Olympics. Kim Jong Un suggests a meeting to discuss North Korea’s participation in the games, but expects the stop of the annual military maneuvers, especially nuclear drills, as a precondition.

What if Washington and Seoul do not fulfill this demand? Kim can take this as proof of the other side’s prevailing aggressive attitude and use it to justify an “appropriate” reaction. This could lead to further missile launches or nuclear tests or both, perhaps even during the Olympics when the presence of hundreds of international athletes near the border will make an immediate military reaction impossible. South Korea has already agreed to meet the North Korean side in Panmunjom next week; the progress of this dialogue will be crucial. In the late 1980s, talks on a North Korean role in the 1988 Seoul Olympics failed, leading to a deadly terrorist attack on a South Korean passenger plane. This time, the stakes are much higher.