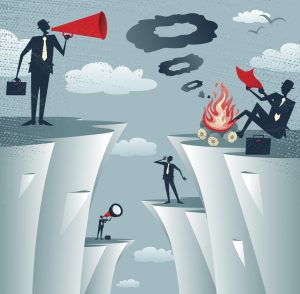 In the current pre-meeting phase, it would make little sense for Pyongyang to lean too far forward in its public statements. Overall, although Pyongyang has not explicitly touched on the subject of a possible Kim-Trump summit through its state-sponsored media apparatus, North Korea has, since March 9, been adjusting and trimming its public posture in preparation for moving to engage the US should the two sides firm up plans for a date and venue. Furthermore, it is not unusual for DPRK media not to report a North Korean leader’s remarks on denuclearization in conversations with the Chinese—as happened recently with Kim’s remarks to Xi Jinping reported by Xinhua but not KCNA. This “silence,” as many pundits have labeled it, is not unusual. In fact, it is not even really “silence.” The North has been clearly signaling—both in what it has and what it hasn’t said—a very different posture than it did last year.

For starters, Pyongyang has virtually stopped referring to its nuclear program over the past three weeks, ever since the visit to Washington by two ROK envoys who had just met with Kim Jong Un. At the same time, it has begun to open up space for a negotiating position to deal with the issue. A March 23 Rodong Sinmun article characterized sanctions as “the main contents of the US hostile policy.” That linkage raises the possibility that Pyongyang could deliberately portray movement on easing sanctions as a lessening of the US “hostile policy.” In turn, since the North’s consistent position has been that its nuclear program was a result of US hostile policy, any movement on the latter could give Pyongyang justification for movement on the former.

Recently, Pyongyang has also significantly cut back what had been standard, frequent references to a US military threat. A March 25 Rodong Sinmun article criticizing the South Korean military for bolstering the ROK defense posture sounded the familiar theme that “dialogue and confrontation can never go together.” An article like this would normally have included complaints about the annual US-ROK exercises, set to begin only a week hence. However, in line with reports that Kim Jong Un told the ROK envoys that this year’s exercises would not be a problem, the article did not mention them. It also has so far made no reference to the April 1 start of the US-ROK Foal Eagle exercise. In fact, on the day the exercises started, Kim appeared at a concert by South Korean pop performers in Pyongyang. The last reference to the exercises in central North Korean media appeared on February 26.

Although North Korean media have so far not explicitly referred to the possibility of a US-DPRK summit, Pyongyang has pretty transparently addressed the subject. A March 20 KCNA commentary noted “there has been a sign of change” in the DPRK-US relations. In an obvious reference to the possibility of talks, it criticized “small-minded” efforts to “spoil the atmosphere and say this or that even before the parties concerned are given a chance to study the inner thoughts of the other side and are seated at a negotiating table.” This is the time, the commentary emphasized, for “all to approach everything with prudence with self-control and patience.”

Apart from central media, Pyongyang appears to be using the pro-DPRK newspaper in Japan, Choson Sinbo, to advance a positive line. On March 10, in an extremely quick reaction to the news of the South Korean envoys visit to Washington, the newspaper carried “analysis” by its long-time and well-connected correspondent in Pyongyang. The article was careful not to say that Kim had actually empowered the South Korean envoys to deliver an offer to the US President, but rather that the envoys had “grasped” Kim’s “intent” and on hearing that, President Trump “expressed his intent” for a summit. The item did specifically note that Kim had said the North can refrain from conducting nuclear and ballistic rocket test launches. The item also referred, without elaboration, to Kim Jong Un having made a “big, resolute, decisive decision,” the sort of formulation frequently used to signify a major shift in policy. Playing to the US President’s claim that policies of previous administrations have all failed, the article predicted that Kim will “show the president—who claims to be ‘the master of deals’—the way to evade the repeated failures of his predecessors and will call for his decisive decision.”

This “analysis” on March 10 was followed quickly with another mention of a possible US-DPRK summit in a March 14 column in Choson Sinbo. The column painted the best outcome in terms of a “win-win strategy”—not a usual North Korean formulation. The column did not rule out having denuclearization on the agenda, though it used a tortured construction to make the point, noting that it would be “extremely foolish” for the President to think that in the talks he could seek “only” Korea’s denuclearization. The column implied that Pyongyang was aiming for a major realignment of the structure in Northeast Asia, noting “there is no eternal foe, and no eternal ally.”