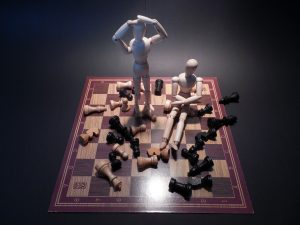 The only possible reaction to the summit is disappointment. We all knew that both leaders wanted a good show and a lot of positive talk, and there was no reason to think that they would fail to deliver. They delivered. The only real question was whether the American president would get more—specifically some clarity from the North Korean chairman on what he meant by denuclearization and when it might happen. We got none of that.

We should feel good about the apparent commitment of both leaders to the process of reducing tensions and movement to new stable, peaceful relations. As Churchill said, “Meeting jaw to jaw is better than war.” But it was these same two leaders whose words in 2017 brought us to the verge of war, perhaps nuclear war, who we now would celebrate for possibly bringing us peace. Cynicism, or at least skepticism, would not be entirely inappropriate right now.

If we look for substance from this summit and the lead up to it, we have the North’s suspension of nuclear and ballistic missile tests, its destruction of something at a nuclear weapons test site, its commitment to destroy something at a ballistic missile test site and the return of some Americans who were being held as prisoners. In exchange, the US president attended a summit with the nearly universally shunned North Korean leader, effectively ended the influence of the sanctions regime against North Korea and promised to end military exercises with its ally South Korea, apparently without prior consultation at home or abroad.

We are left to ask, “where’s the beef?” But maybe it is coming. Critics have said that a real rapprochement would take years—that denuclearization itself would take years—so perhaps we should be patient and generous, cut the president some slack. That would be all right, so long as there are no high fives, no “mission accomplished” claims, no plans for a Nobel Peace Prize, no more talk about the naivety and stupidity of pursuing diplomacy, and there is, instead, a sustained effort to get North Korea to agree to and execute a program to remove from its territory all nuclear weapons and fissile material, all production capability for both, as well as ballistic missiles and ballistic missile production capability, with as much transparency as is physically possible.

In short, I am prepared to wait for this outcome. In the meantime, we need to cultivate our garden, and that means paying attention to our alliances with Seoul and Tokyo, and leaving no doubt about our commitment to defense and deterrence for their security and ours.