Recent commercial satellite imagery indicates a low level of activity at North Korea’s Sinpo South Shipyard, where North Korea’s only experimental ballistic missile submarine (SSBA) is berthed. Movement of parts and equipment consistent with a shipbuilding campaign first observed last year appear to be ongoing. However, there is no conclusive evidence that a new submarine is being built or if so, what type of ship is under construction. Of the North Korean shipyards capable of building the nation’s first operational ballistic missile submarine (SSB)—to supersede its existing SINPO-class SSBA—the Sinpo South Shipyard remains the most probable of six locations. The significant modernization and expansion of this facility over the past four years underscores its importance to the North’s submarine-launched ballistic missile program.

Additionally, imagery indicates that dredging is taking place in the secure boat basin. The purpose of this activity is unclear but could include removing normal silt buildup, creating more clearance for the SINPO-class submarine to partially submerge to test repairs, or creating deeper anchorage for a larger submarine or vessel.

At the parts storage yard, adjacent to the facility’s construction halls, the gantry crane being erected in imagery from May 2018 is now operational and the continued low-level movement of parts and components into and out of the parts yards is observed. Taken as a whole, these observations suggest an ongoing shipbuilding program or preparations for a new one.

Figure 1. Continued movement of parts and equipment at the storage yard adjacent to the construction halls.

Both the submersible missile test stand barge and SINPO-class submarine remain berthed at essentially the same locations as observed since last August 2017 and appear capable of putting to sea at any time, although there are no indications of them doing so.

The floating security gate to the basin is open and three barges are present—a deck barge with an excavator and two hopper barges for the dredged material. The two hopper barges appear to be relatively full, suggesting that dredging of the boat basin is underway. While the waters of the boat basin are shallow enough to need occasional dredging, the exact purpose of this activity is unclear and could include normal maintenance, creating more clearance for the SINPO-class submarine to partially submerge to test repairs or creating deeper anchorage for a larger submarine or vessel.

Figure 2. Dredging appears to be taking place at the secure boat basin.

There are no indications of recent, or preparations for new, ejection testing at the facility’s test stand.[1]

Figure 3. No activity at the missile test stand.

From December 2017 to May 2018, higher than normal levels of activity took place at the northern support area of the shipyard. Several railcars and a heavy equipment tractor-trailer were present, along with logs at the woodworking shop, a coal delivery and an increasing number and diversity of parts/components in the metal receiving and storage yard. The nature of this activity is unclear and seems to have ceased by July 2018.

Figure 4. Heightened activity observed at the northern support area in early 2018, but has ceased by July. 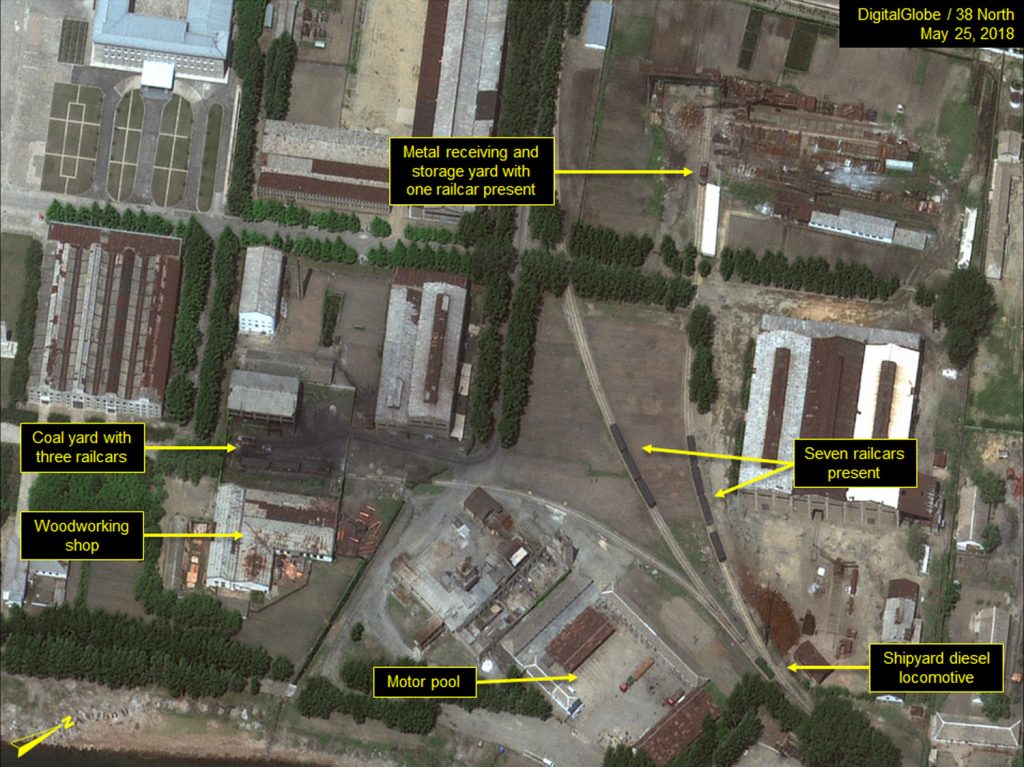 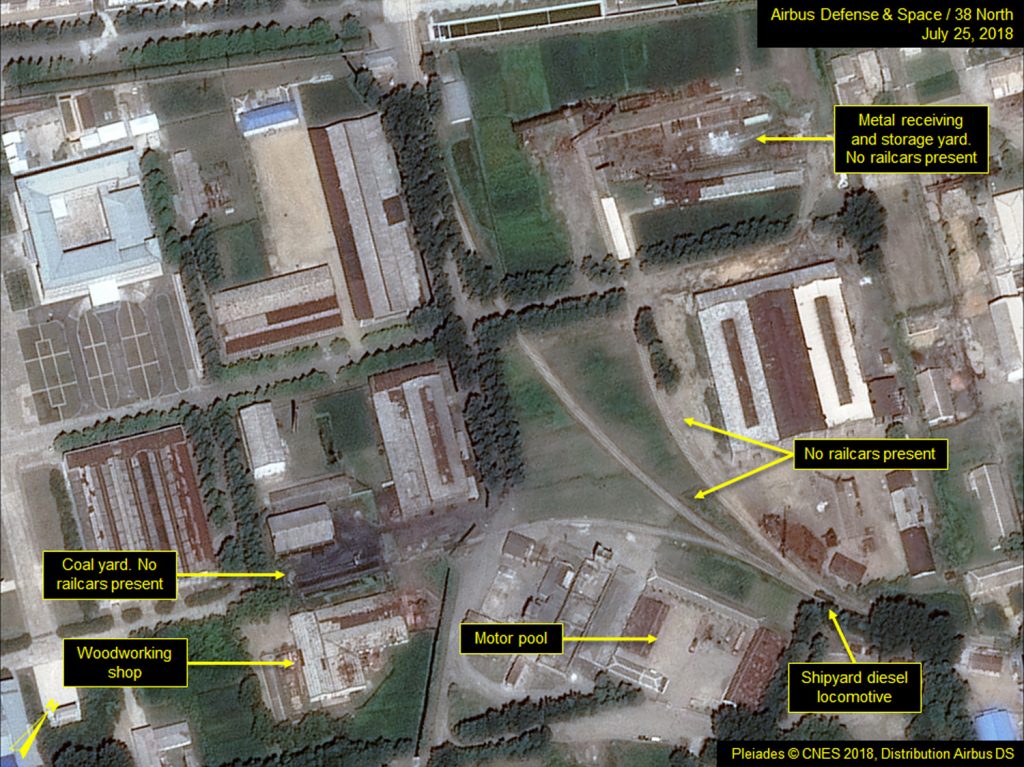 Construction of a new construction/maintenance hall and L-shaped pier at the southern tip of the Yuktaeso-ri (Sinpo) Peninsula continues at a slow pace. In recent imagery, the foundation of the hall has been almost completely back-filled and the length of the L-shaped pier has been extended from 211 meters in March to 240 meters by July.[2]

Figure 5. Construction has slowed on the new construction/maintenance hall and L-shaped pier.