In March, the United Nations issued an urgent call for humanitarian assistance to the DPRK. It requested $111 million to take care of the food, health and sanitation needs of the country’s 6 million most vulnerable, including 1.7 million children under the age of five and more than 340,000 pregnant and breastfeeding women.[1] However, only 20.6 percent of the targeted amount has been met so far. In fact, total humanitarian aid to North Korea over the years has dropped from $103.9 million in 2012 to $22.9 million this year.[2] 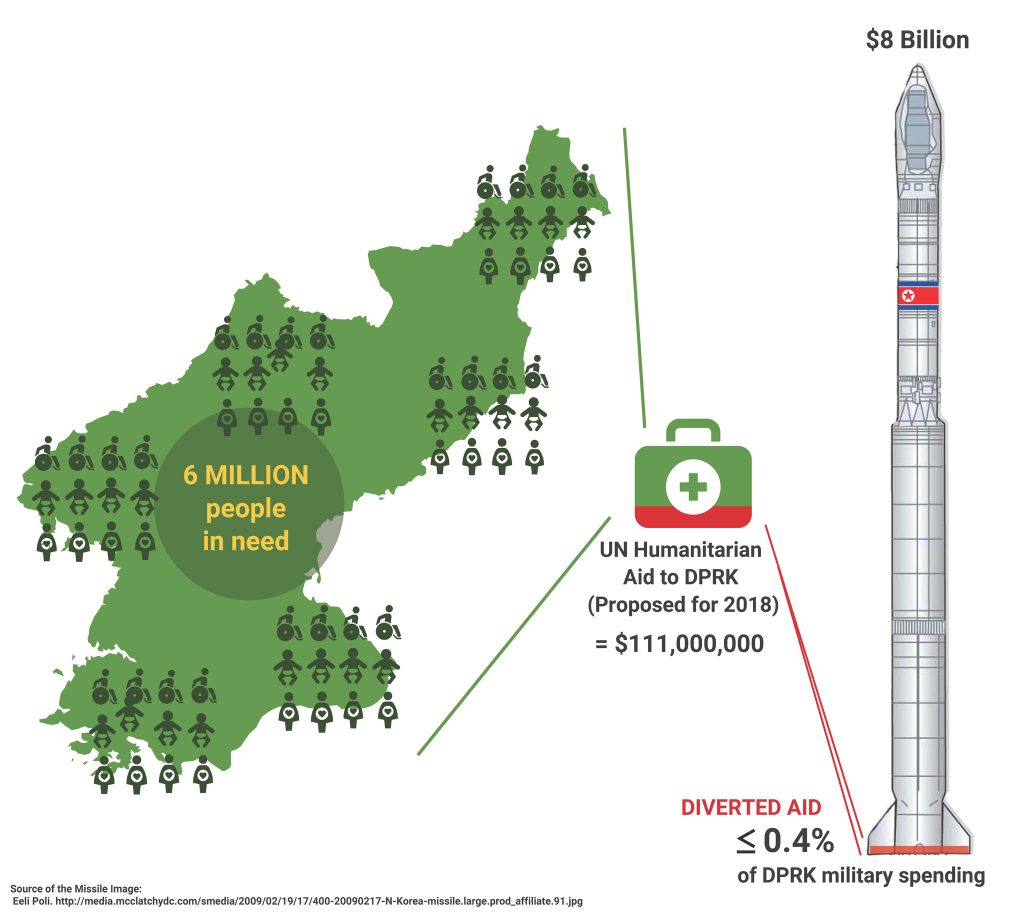 International donors and organizations have become increasingly reluctant to provide funds to North Korea. Although five countries—Switzerland, Sweden, Canada, France and Russia—have responded to the UN’s request this year, there is still a funding gap of $88.1 million. Previous donors such as United Kingdom, Australia, Japan, Ireland, South Korea and others remain uncommitted. One concern frequently cited for this reluctance is that foreign aid, including critical humanitarian aid, will either be diverted to the military or fund the nuclear weapons and missile programs or take pressure off of the regime to provide for its people.

However, these concerns are based on basic misunderstandings of how and why humanitarian assistance is provided to North Korea. Facts on the ground show that the potential for diversion is minimal and the main benefactors are generally not government or military institutions. Given the mission of UN humanitarian assistance, denying the DPRK this assistance for political purposes is both unethical and inhumane.

Premise 1: Humanitarian Assistance Gets Diverted to The Military or WMD Programs

Tapan Mishra, the UN Resident Coordinator for DPRK, explained to the UN Sanctions Committee on DPRK earlier this year that over 90 percent of humanitarian funds to DPRK are used to “procure humanitarian goods outside of the country.” Only 10 percent of the funds are used “within the country to ‘keep the lights on,’ i.e., operational costs such as staff salaries, rent, and transportation costs.”[3]

Using this statement as a basis, let’s consider the potential opportunities for aid diversion. The 10 percent overhead, or approximately $11 million, to be used within North Korea has little room for misuse, as it is designated for practical costs that are indispensable in carrying out humanitarian operations. Money for the salaries for the international and national staff, transportation costs, rent, utilities and administrative supplies would be difficult to divert in the technical sense since these are hard costs and paid as intended. It is possible that the regime could still benefit financially, for instance, rent could be a source of income. Also, the national staff, who are paid according to the UN guidelines, could be assessed a “tax.” But given the minimal footprint of the UN inside North Korea, the financial benefit for the regime from overhead costs is negligible.

Since 90 percent of the total humanitarian aid crosses into DPRK borders not as capital but instead as food, medicine and supplies, opportunities for money fraud or embezzlement are limited. However, these goods can still be misappropriated and sold. Although there is no evidence of systematic, regime-driven diversion of foreign-procured goods, multiple sources document that they are often redirected to the private market by individuals.[4],[5] Estimates culled from multiple humanitarian agencies indicate that roughly 30 percent of goods donated to the DPRK could be lost through resale.[6]

Theoretically, if the $111 million is disbursed in humanitarian aid to North Korea, approximately $100 million would be delivered in goods, which at a 30 percent potential diversion rate, means that approximately $30 million of aid could be diverted [Table 1]—a sizable sum. However, since the bulk of the diversion results from resale of goods—which would more likely end up in the pockets of mid-level officials rather than the regime itself—the actual amount that the regime would have at its discretion is likely to be much less.

Further, the $30 million figure represents the acquisition costs of the potentially diverted goods. To actually have $30 million in hand, these goods would need to be exported or sold domestically and money converted to hard currency—nearly impossible in the current sanctions regime. There is also the question of who keeps the proceeds from the resales? Most DPRK Ministries are expected to raise revenues to support their operations. It is possible that some of the funds reach the highest levels of the DPRK government for discretionary spending such as for the military, but certainly not all. In reality, most of the profits of diversion would be in local currency and most of that will not reach the highest levels of the regime or the military.

Beyond the issue of diversion, the question of aid fungibility remains. Many fear that humanitarian aid to DPRK will take pressure off of the regime to spend its own resources on helping the populations in need, giving more room in its budget to spend on the military and nuclear weapons instead. This argument assumes that the intent of the DPRK regime when allocating resources for humanitarian purposes is similar in scope, target and threshold as the UN’s intent. However, the evidence shows that there are key differences.

At times of acute emergencies, North Korea does allocate resources to alleviate the suffering of its people. For example, in response to the massive flood in North Hamgyong Province in 2016 that displaced nearly 70,000 people, the North Korean government mobilized 140,000 soldiers and 230,000 civilians to relocate the displaced victims safely and to provide food and shelter for them.[7] When UN agencies step in to assist during acute emergencies, one can argue that the aid takes pressure off of the regime. However, from a moral perspective, denial of aid during such emergencies is morally reprehensible and the international community, in a spirit of solidarity, should partner with DPRK in delivering assistance.

In contrast, the threshold for the allocation of resources for food, nutrition, basic medicine and sanitation—the bulk of the current request from the UN—is notably different for the DPRK and the UN. Pyongyang may self-justify the current allocation as sufficient for the needs of the population. Indeed, the food security and overall health of the North Korean population has improved over the years; the food production and the spending on health as a percentage of the GDP has also increased over the last decade. This certainly does not mean that North Korean people are not hungry or sick—many, especially in the provinces, are. And it is precisely for these marginalized and vulnerable people, all 6 million of them, that the UN agencies prioritize their programming. The aid directed at this often-forgotten population is likely not fungible as North Korea may not re-allocate its resources when foreign aid is not forthcoming. This aid will not prop up the government but it will help millions get basic medicines and supplement their diets.

It should be noted that DPRK is not alone when it comes to governments not doing “everything” for all of its population while prioritizing other sectors. Other countries spend massive amounts on their military while many struggle with basic health care and shelter. The failure of many states in protecting their most vulnerable is a matter of resources getting allocated based on each government’s own values and politics.

The estimated total military expenditure in DPRK is at least $8 billion per year.[8] The cost of the nuclear weapons program is estimated to be about $0.7 billion per year.[9] The worst-case scenario, assuming that all of the diversion becomes the discretion of the regime (which is a reach), the total amount that could possibly be diverted from fully funding the UN’s 2018 target of $111 million in humanitarian aid to DPRK would be, at most, a mere 0.4 percent of the annual military expenditure.

The issues of diversion and fungibility are common concerns raised when opposing humanitarian aid to DPRK, but even the worst-case scenarios for diversion would not substantially add to the North’s military expenditure. Aid fungibility is also not a significant issue since the regime and the UN differ in their thresholds for directing their funds towards vulnerable populations. Donors should reject the idea that humanitarian aid contributes significantly to increasing the North’s military capability and capacity. What they should not forget is that the UN humanitarian mission is intended to help ordinary people, deserving of life and good health, that are hungry and sick. To afford urgent, life-saving activities for the most needy, vulnerable and neglected is, in essence, what humanitarian aid is for; and it would be inhumane and unethical to deny it any longer to the people in DPRK.