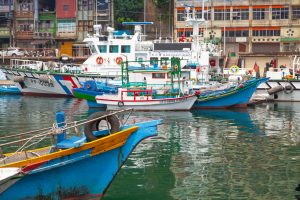 Last month, the world learned that North Korea attempted to sell submarine designs to Taiwan in 2016. As Taiwan and North Korea do not have formal relations, the offer came through an unusual channel: a Taiwanese trading company that did business with North Korea received a “mandate” from the National Defense Commission (now the State Affairs Commission). Taipei confirmed the authenticity of the bid but turned it down, instead moving on to explore designs from European companies to modernize its submarine fleet.

This is not the first business overture between Taiwan and North Korea, though it is the one most closely tied to Taiwan’s security. Taiwan has a long history of trade with North Korea across a variety of sectors. Although the volume is very low compared to Taiwan’s trade with other countries and the prospects for growth are uncertain, interest persists in expanding commercial and business opportunities with the North. Taiwan is not a member of the United Nations and therefore is not obligated to comply with UN Security Council sanctions on North Korea. Nonetheless, Taipei will continue to scrupulously comply with these sanctions due to the heavy diplomatic and economic price it would pay by siding with North Korea against the international community and, more importantly, the United States. The potential strategic cost of losing the support of the US—which has sold Taiwan billions of dollars’ worth of arms over the years—far outweighs the benefit of a few submarines or a small trade deal.

Not Even a Drop in the Bucket

The most high-profile trade agreement between North Korea and Taiwan never actually went through. The deal, between the North and the state-owned Taipower company, to export nuclear waste to North Korea fell through in 1997 due to pressure from the US and South Korea (North Korea tried suing the company unsuccessfully in 2013). The rest of Taiwan-North Korea trade remained thin, with total trade peaking in 2012 at $52.9 million. As international sanctions ratcheted up in recent years, the trade volume decreased precipitously to $2.8 million in 2017 and zero in 2018, following the decision by the Taiwanese government to impose a total ban on trade with North Korea in September 2017.

It is also worth noting that the Taiwan-North Korea trade volume is a small part of North Korea’s total trade, which was over $5 billion in 2017, mostly with China. North Korea desperately needs diversification of trade partners, though, and Taiwan is one of the few territories with a sizeable economy that is not a member of the UN. This explains North Korea’s persistence in probing Taiwan’s willingness to trade during these years of sanctions. Even a small expansion of trade with Taiwanese companies willing to flout sanctions is an improvement on North Korea’s overdependence on China.

Despite the paltry trade between the two countries, interest persists in Taiwan’s private sector in conducting business with North Korea. For the past year, reports have surfaced of oil and coal sales that violate UN sanctions. At a meeting in October 2018 between members of the Taiwanese business community, including former Kuomintang financial manager Liu Tai-ying, and Yang Bin, a Chinese-Dutch businessman who worked on establishing North Korea’s Sinuiju Special Economic Zone, Yang was reportedly drumming up interest in investing in Sinuiju again. The meeting was likely held with optimism that the severe UN sanctions on North Korea would eventually be lifted, providing new opportunities for future Taiwanese trade and investment. Likewise, the opening of a North Korean tourism office in Taipei in July 2018 seems to reflect confidence that the extreme isolation of North Korea would someday end. Tourism to North Korea is not included in the sanctions, and it provides a very modest (and heavily monitored) opportunity to build people-to-people relations with Taiwan.

It is possible that in a world without sanctions trade between Taiwan and North Korea could increase significantly, perhaps above the peak levels in 2012 as the North Korean economy grows. Increased tourism to North Korea would augment the cash flowing from Taiwan to North Korea, as well as provide more opportunities for the Taiwanese business community to engage with North Korea. Any increase in trade and tourism will not push North Korea to the top tiers of Taiwan’s trading partners any time soon, due to the small size of North Korea’s economy, but the relationship might be an area of ongoing growth as North Korea’s leadership seeks to diversify its economy. The greater share of benefits in the relationship, however, would go to North Korea; for Taiwan, the small economic gains would do nothing to improve its severely curtailed international diplomatic and political presence.

That tension between economic gains and diplomatic needs is what drives Taipei’s decision-making on trade with the North. The optimism of the private sector notwithstanding, the Tsai administration has demonstrated its seriousness about complying with international sanctions by punishing transgressors. As stories have emerged over the past year of Taiwanese citizens carrying out business with North Korea, the government launched investigations of multiple companies and individuals for flouting sanctions, including two companies that arranged ship-to-ship transfers of oil in the East China Sea and four men who facilitated a sale of coal from North Korea to Vietnam. In July 2018, the government also ordered companies to stop hiring North Korean workers for fishing vessels, cutting off another source of hard currency for North Korea. These actions are consistent with the Taiwanese government’s historical stance on sanctions compliance; government investigations of companies attempting to circumvent sanctions on North Korea go back years, such as a 2007 sale of uranium enrichment equipment and a 2010 shipment of engine manufacturing tools. Taipei’s consistent determination to root out sanctions noncompliance also shows the valuable role it plays in keeping the sanctions as watertight as possible.

Taiwan’s Calculation of Risks and Rewards: A No-Brainer

Taiwan’s actions to comply with international sanctions are part of its strategic calculations. Taiwan has no formal diplomatic relations with North Korea and plays no role in the ongoing diplomacy involving North Korea, the US, South Korea and China. North Korea has never been a major trading partner for Taiwan, so banning all trade has a negligible impact on Taiwan’s overall trade volume—no matter how lucrative business may have been for individual Taiwanese companies that made deals with North Korean partners. In this light, Taipei’s decision in 2016 to not pursue the North Korean submarine bid also reflects a decision to work on improving Taiwan’s defense capabilities within the well-established parameters of its unofficial relations with the United States, Japan and other countries, rather than taking a chance with North Korea.

Indeed, Taiwan has much to lose by ignoring the sanctions. Though Taiwan is not a member of the UN, by supporting and enforcing the sanctions it helps to make the case that it is a responsible member of the international community and stays in lockstep with the United States, an important, albeit informal, ally and trade partner. The Trump administration has been a strong proponent of Taiwan (aside from a supportive statement early in the administration about the “One China” policy in response to Beijing’s ire over Trump’s phone call as president-elect with Tsai). Over Beijing’s protests, the administration supported Congress’ passage of the Taiwan Travel Act; has sailed US Navy vessels through the Taiwan Strait; refused to agree to China’s demand for foreign airlines to delist Taiwan as a destination country; and has sold Taiwan nearly $2 billion in arms. At a time when Beijing has moved to further isolate Taiwan in the international community, US support is far more valuable to Taiwan than a small amount of trade with North Korea. In addition, if Taiwan decided to trade with North Korea, Beijing might attempt to interrupt this activity by putting pressure on Pyongyang to halt trade with Taiwan (and perhaps intercept shipborne traffic), even though China continues to trade with the DPRK in violation of UN sanctions.

Taipei’s compliance with international sanctions on North Korea underscores its role as a responsible and active member of the international community, which makes it more difficult for Beijing’s ongoing campaign to increase Taiwan’s international isolation. More importantly, it will help keep the Trump administration on its side—a wise decision given the country’s diplomatic and economic equities in close relations with the United States. However, should the UN relax sanctions in the future, the Taiwanese business community seems primed to enter the North Korean market, whether through Sinuiju or elsewhere.