Coal and hydropower are the two main sources of power in North Korea, however, hydropower accounts for the majority of the country’s actual electricity production.[1] During the Kim Jong Il era, North Korea had embarked on an ambitious plan to build large hydroelectric power stations across the country, each capable of generating enough electricity to power and light its major urban areas. The centerpiece of that plan was the Huichon Power Station, the largest to be built in North Korea, and capable of generating some 300,000 kilowatts (kW) of power, sufficient to meet the needs of its capital, Pyongyang. For Kim, Huichon was to be a symbol of North Korean pride and its peoples’ ingenuity. Unfortunately, it also became a major source of frustration as climate and engineering failures seemed to conspire against the project, and Huichon has yet to achieve its output goals.

Following his father’s death, Kim Jong Un continued to champion the Huichon project. However, after two years and continued setbacks, he altered the country’s strategic plan for energy production and shifted the focus toward building small-to-medium-sized, tiered hydroelectric power stations such as those now constructed along the Chongchon River. While these smaller power stations were originally intended to satisfy local and regional energy needs, they are now becoming a part of a larger, integrated power grid.[2]

This first report focuses on the construction activity at both large and small-to-medium-sized, tiered hydroelectric power stations located on the Chongchon River. In doing so, it’s important to understand the climate, terrain, and engineering challenges the DPRK faces.

Near the headwaters of the Chongchon River and east of Huichon is where the namesake, large-scale Huichon Hydroelectric Power Station is located. The Huichon power project actually consists of two hydroelectric plants, each supported by a separate man-made reservoir, created by the placement of a large dam, one located at the headwaters of the Changja River near Ryongrim and the other east of Huichon on the Chongchon River.

Huichon Station 1 is located just off the Chongchon River east of the Huichon/Chongchon Reservoir; however, the water used to power its turbines is piped from the Ryongrim/Changja Reservoir located approximately 30 km to the north. Station 2 is located at the base of the Huichon/Chongchon Reservoir. Touted by Kim Jong Il as the future for hydroelectric power generation, these large reservoirs were intended to ensure that a sustained supply of water would be available to turn the generator turbines. Unfortunately, both dams have been plagued by engineering flaws and, coupled with climatic extremes, neither has achieved its intended output. 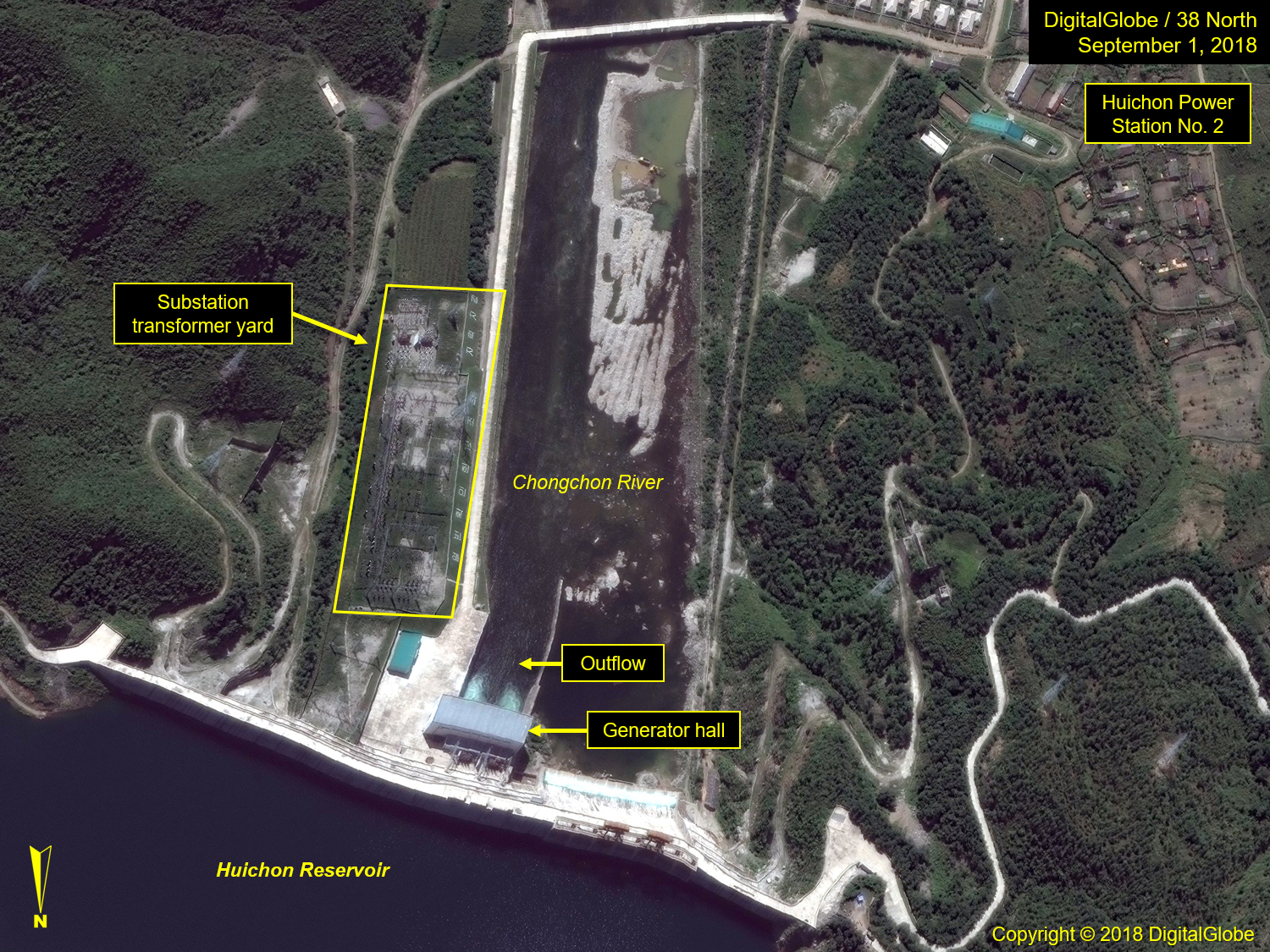 From their beginning, setbacks were common in the construction and operation of the large Huichon Power Stations, and harsh weather experienced throughout the region has impacted the efficiency of all its dams. Severe winter cold causes ice to build, constricting the flow of water and thus, slowing turbine speeds, which in turn diminishes the power output. Additionally, drought and extreme summer heat have plagued North Korea for the past two years, further impacting water levels and electrical output.

The persistence of these conditions has meant that the turbines of the large power plants have been unable to meet specifications, and therefore, a change in strategy began to emerge by 2013 and was articulated publicly in Kim Jong Un’s 2014 New Years Address. In his speech, Kim highlighted a new direction in hydroelectric power generation, citing a multiple tier strategy to build smaller power stations along the Chongchon River.

In addressing electric power, he stated that:

While taking measures for generating electricity to the maximum at existing power stations, we should draw up correct prospective plans for radically easing the strain on electricity supply and exert ourselves to carry them out. It is important to produce more electricity with priority given to hydraulic resources, and by using wind, geothermal, solar and other kinds of natural energy.

Power generation, and specifically hydroelectric power plants, was a theme repeated in Kim’s New Years speeches of 2015, 2016 and 2017, where he again highlighted the Chongchon River tiered system. Finally, in his 2018 address, Kim talked about focusing on area-specific electricity generation, stating: 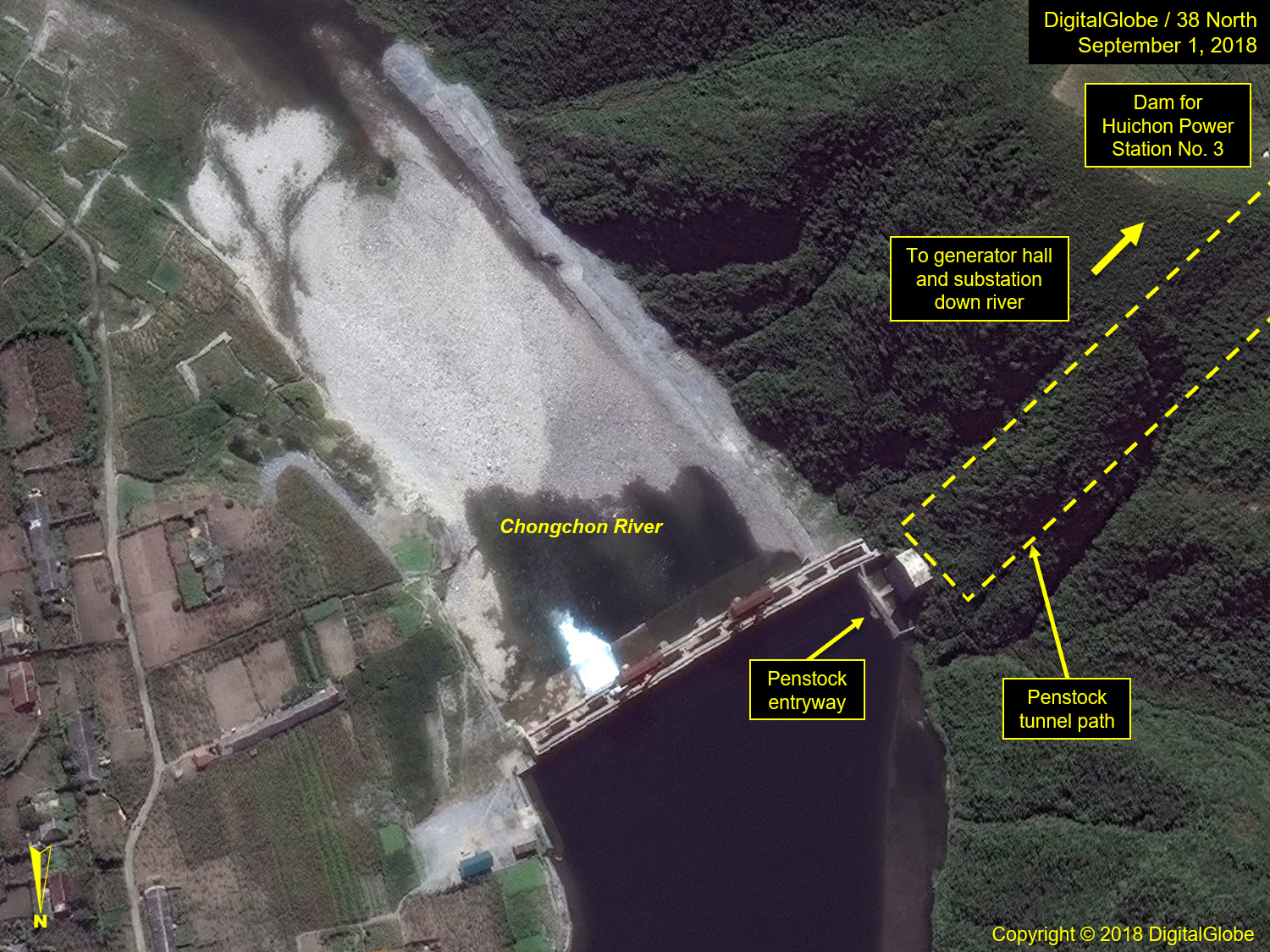 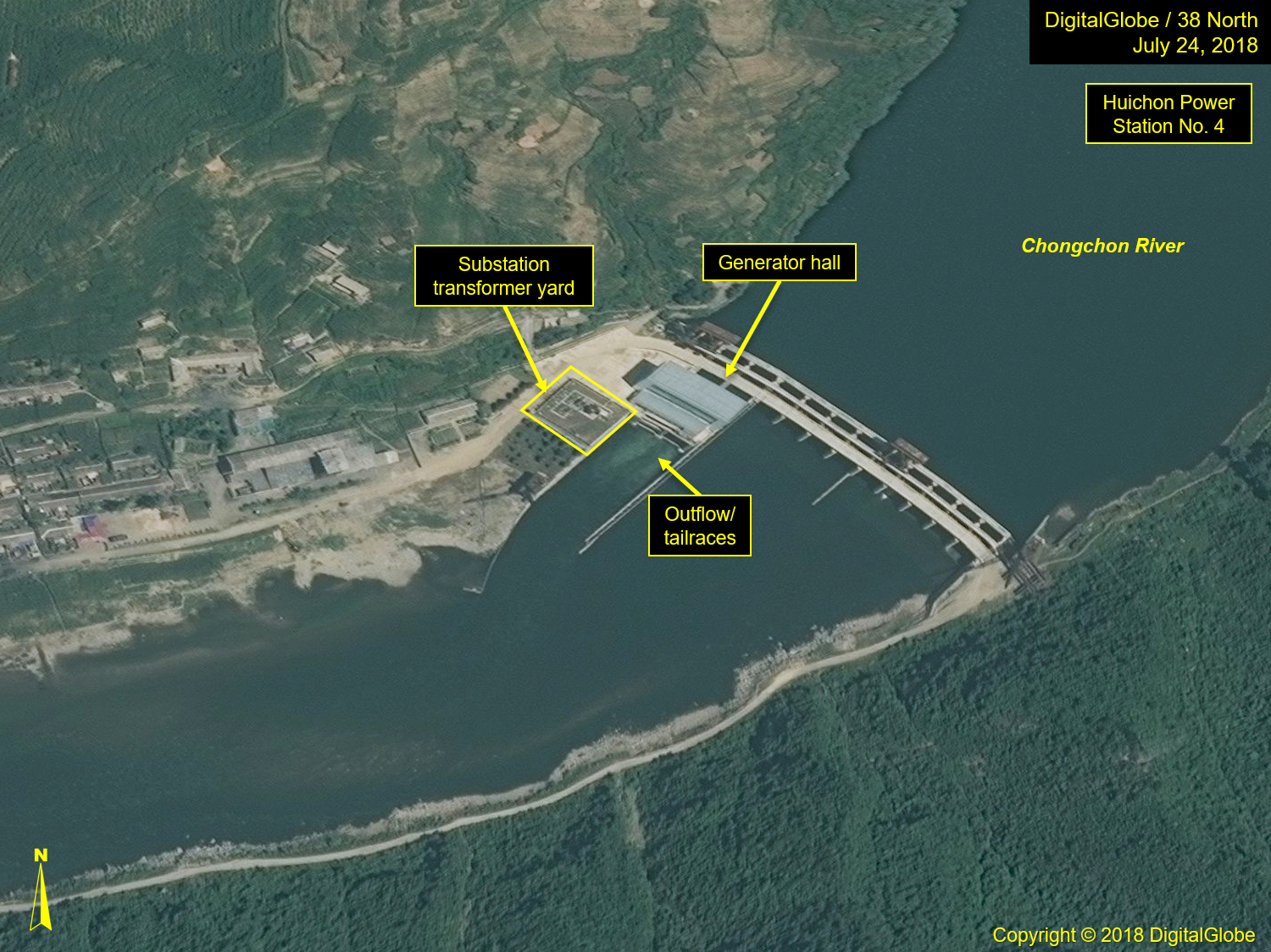 From Huichon Power Station 2, going south along an 80 km stretch of the Chongchon River, are a series of 10 small-sized power stations, each damming the river along the way and producing power used locally. These dams are, more or less, cookie cutter in design, although penstocks and generator halls for a couple are not collocated with their associated dams. 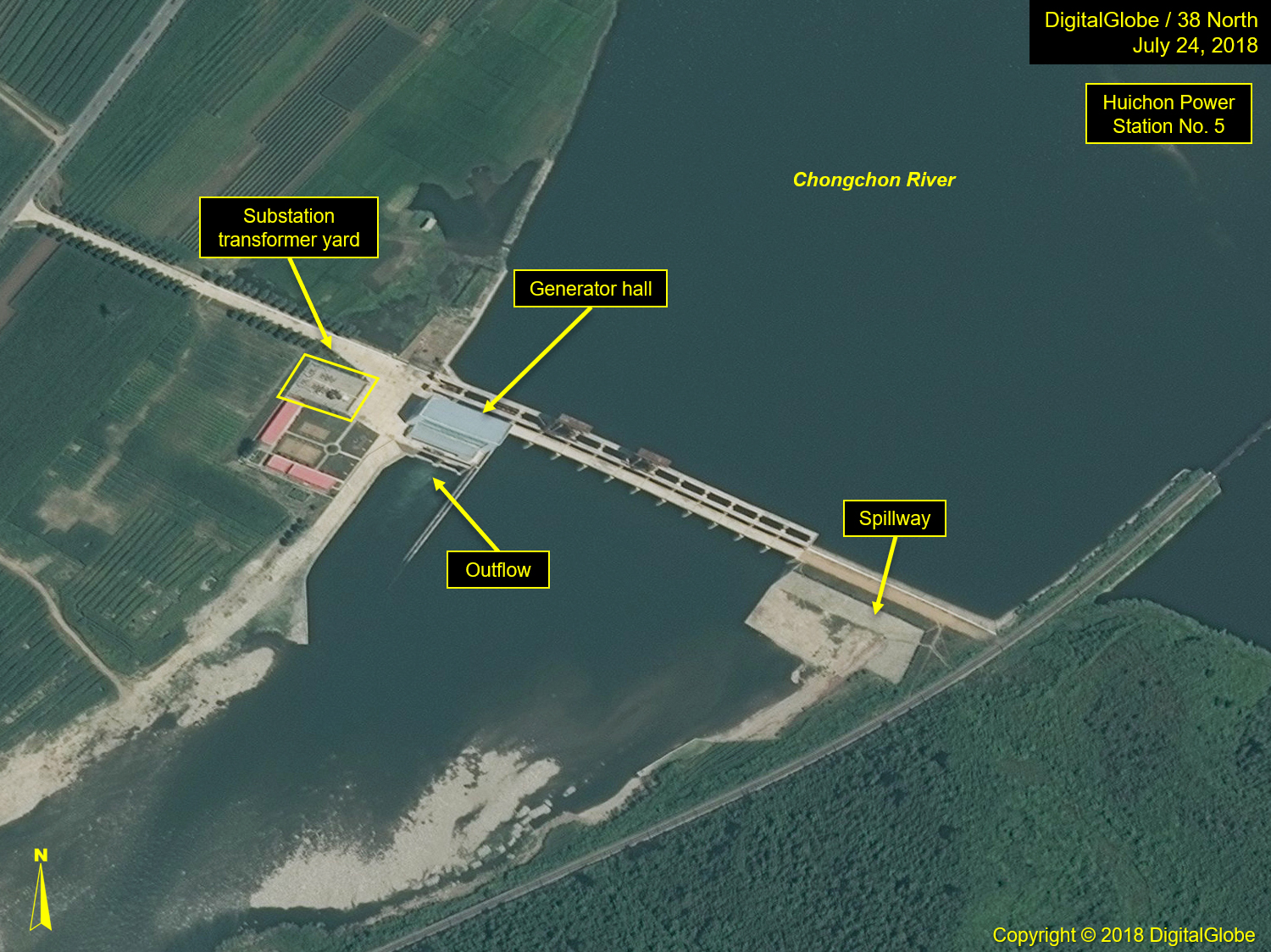 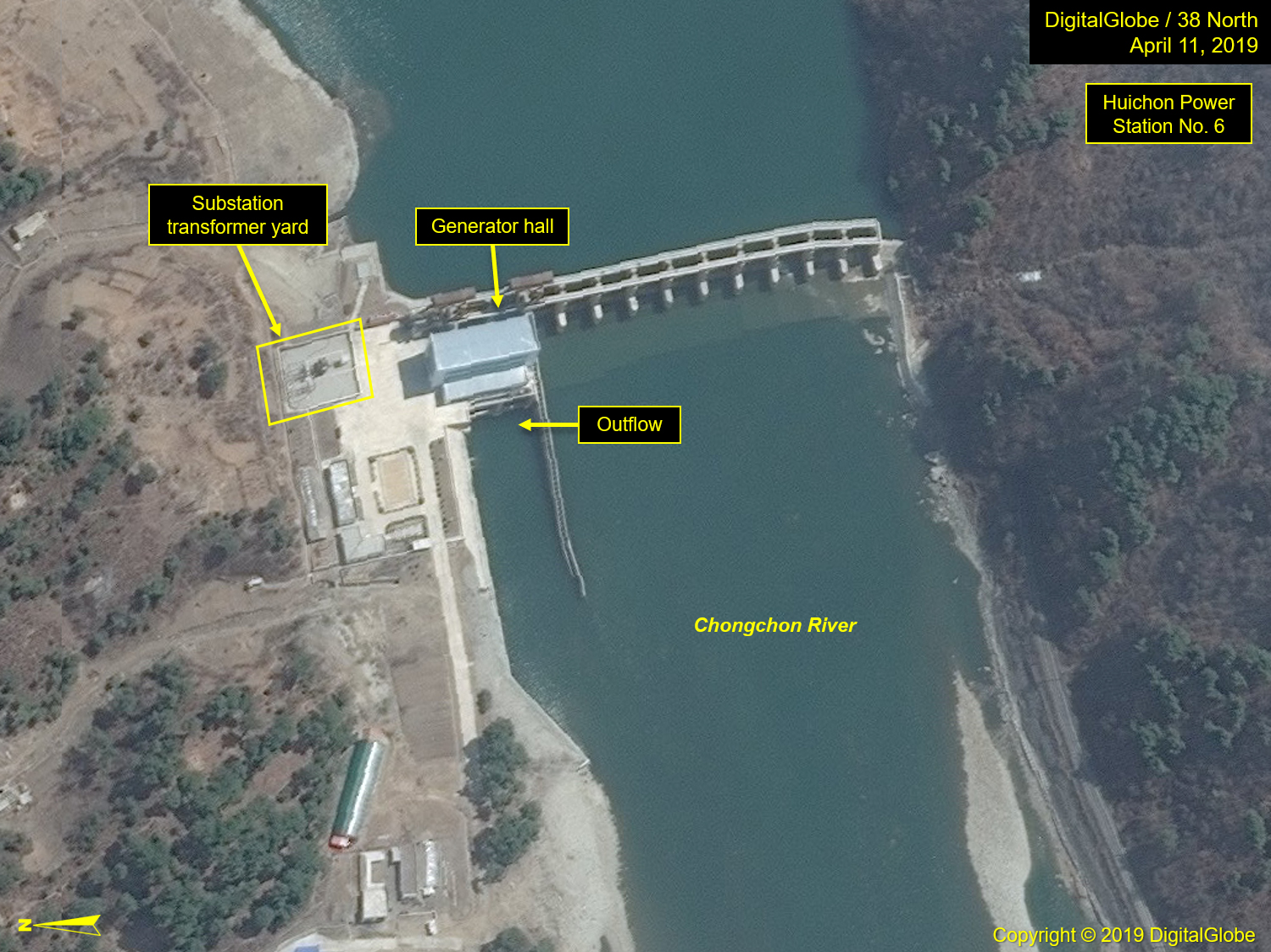 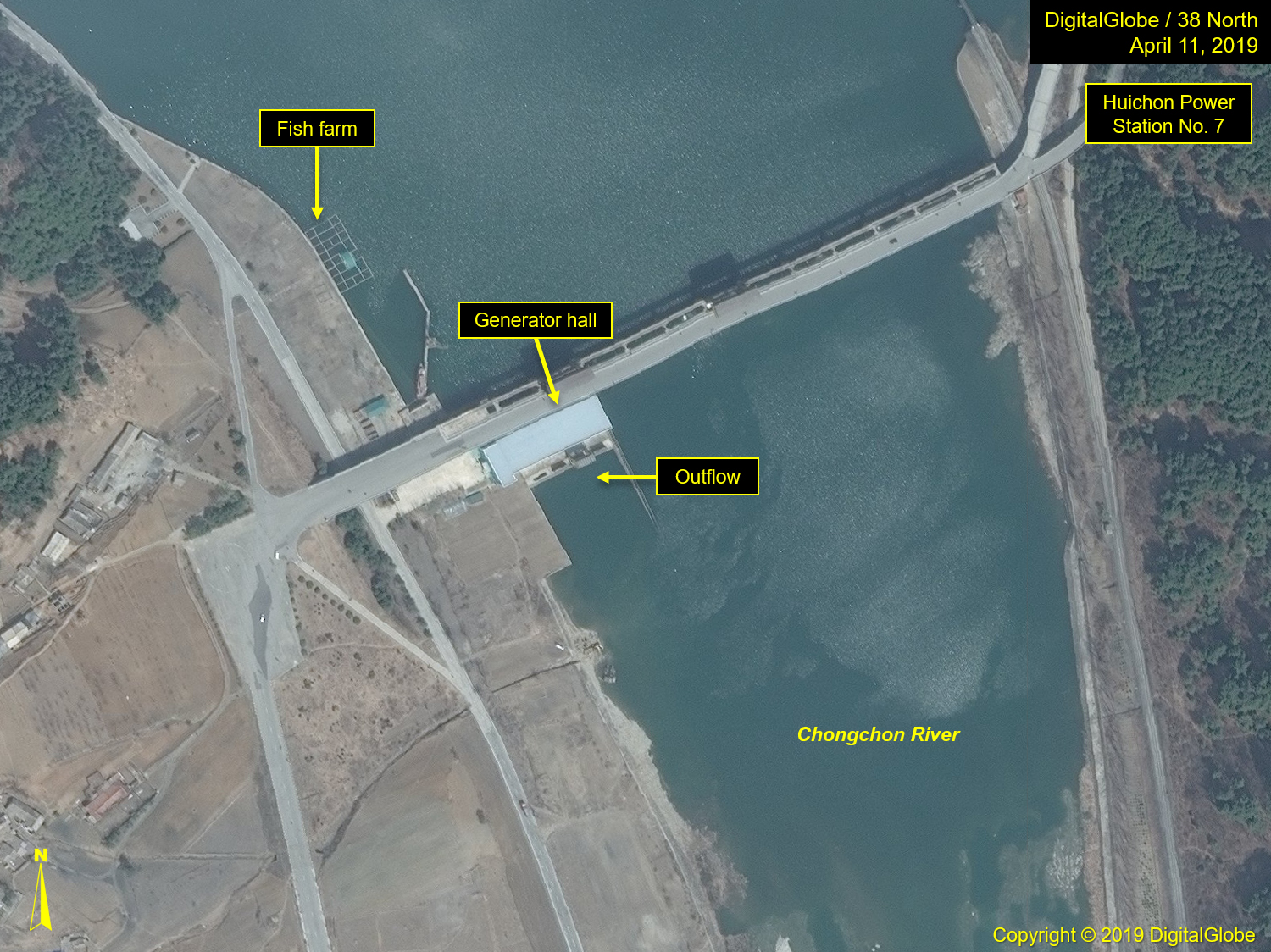 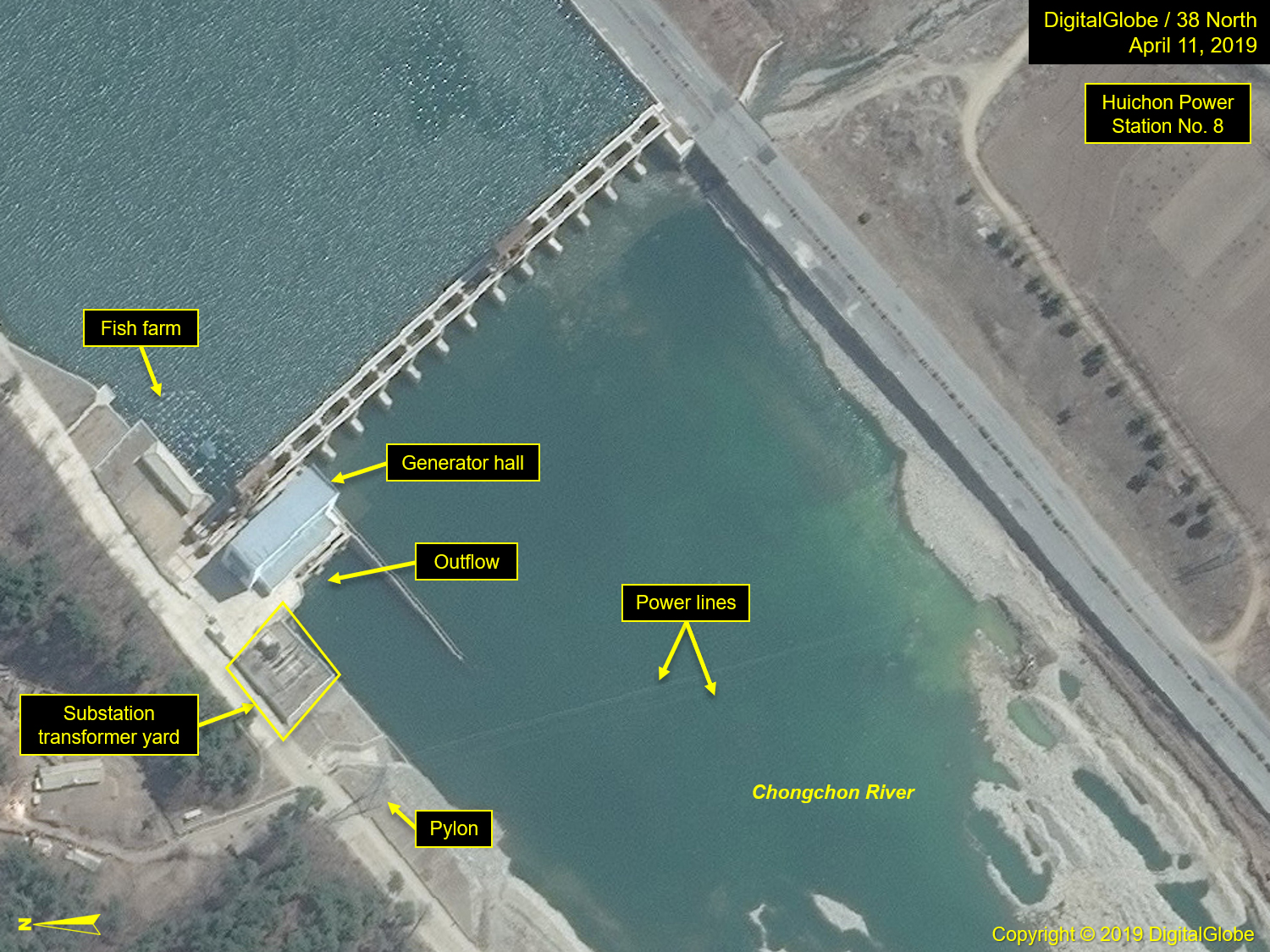 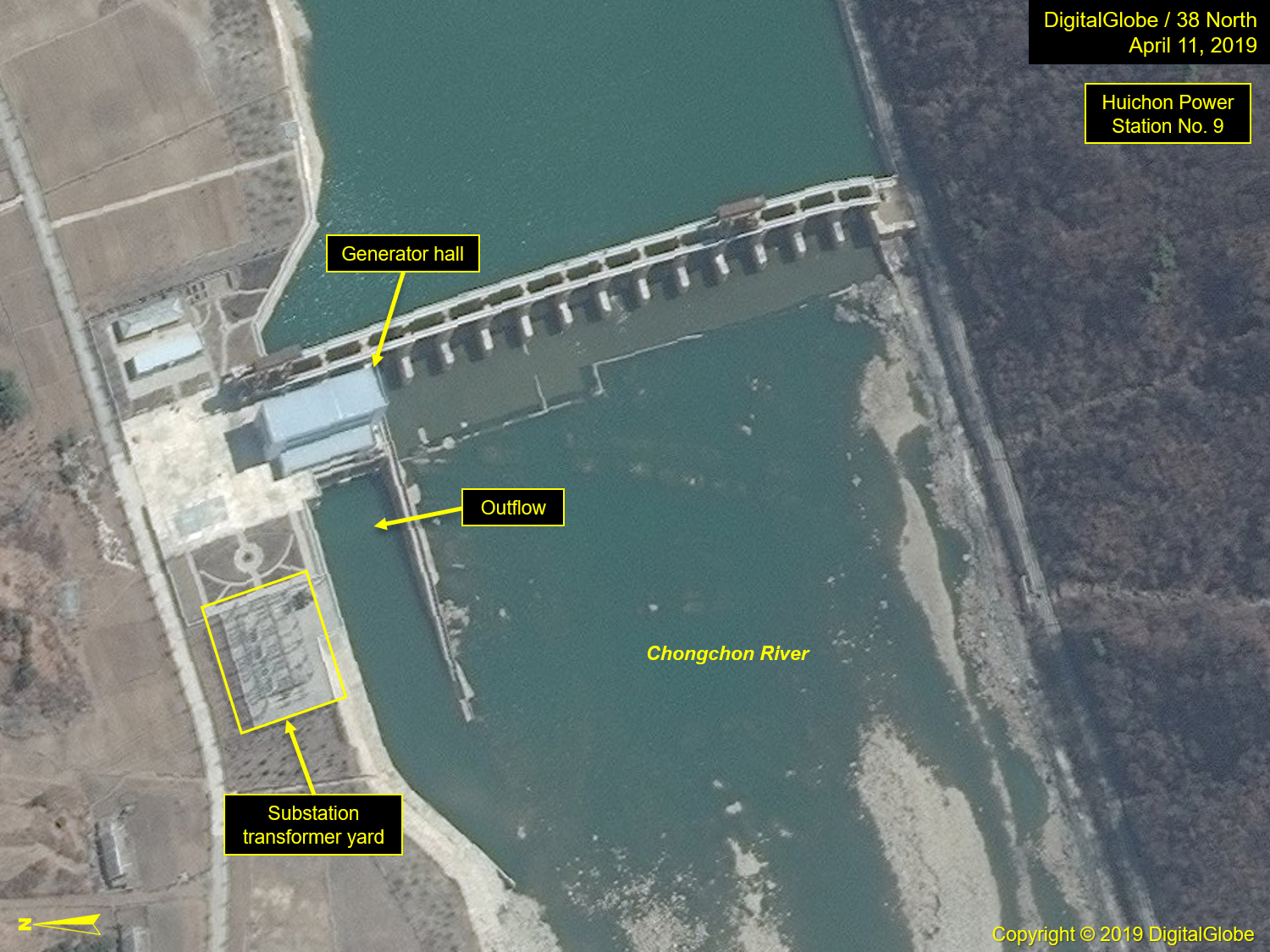 Figure 9. Huichon Station No. 9 without collocated generator halls and penstocks. 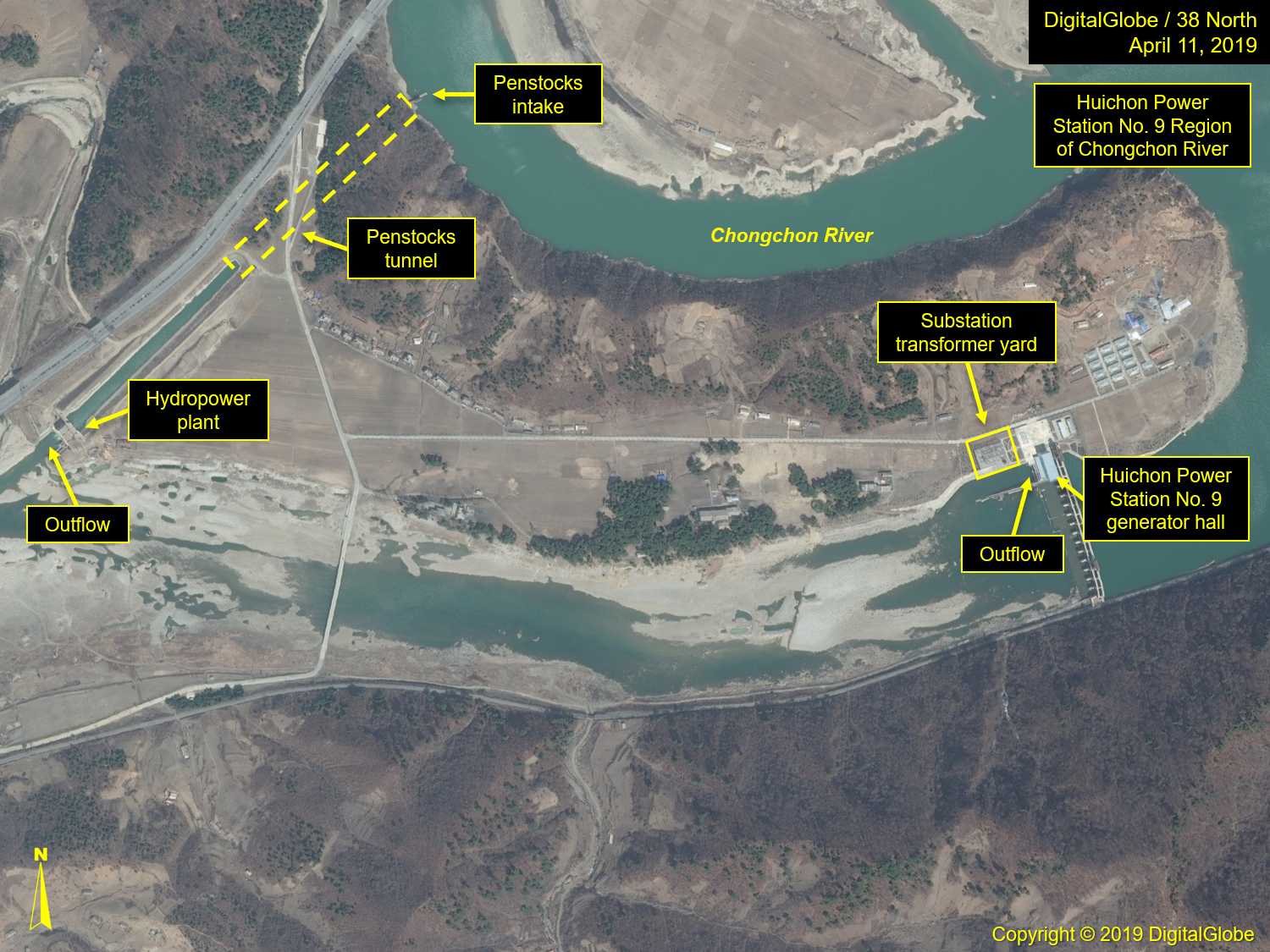 The Chongchon River project began in 2013, and reportedly, was complete and operational by late 2015. The entire project was completed at a far faster pace than that associated with the construction of the large hydroelectric power stations. While imagery coverage of the entire stretch of the 10-plant project has been inconsistent, what is available indicates most of the construction on the dams began in 2013, but at least two dams were not started until 2014. On the latest coverage of each, they all appear complete or nearly complete, although one lacks the visible presence of a substation, and for most, limited image resolution precludes the ability to discern the presence of electric power lines. 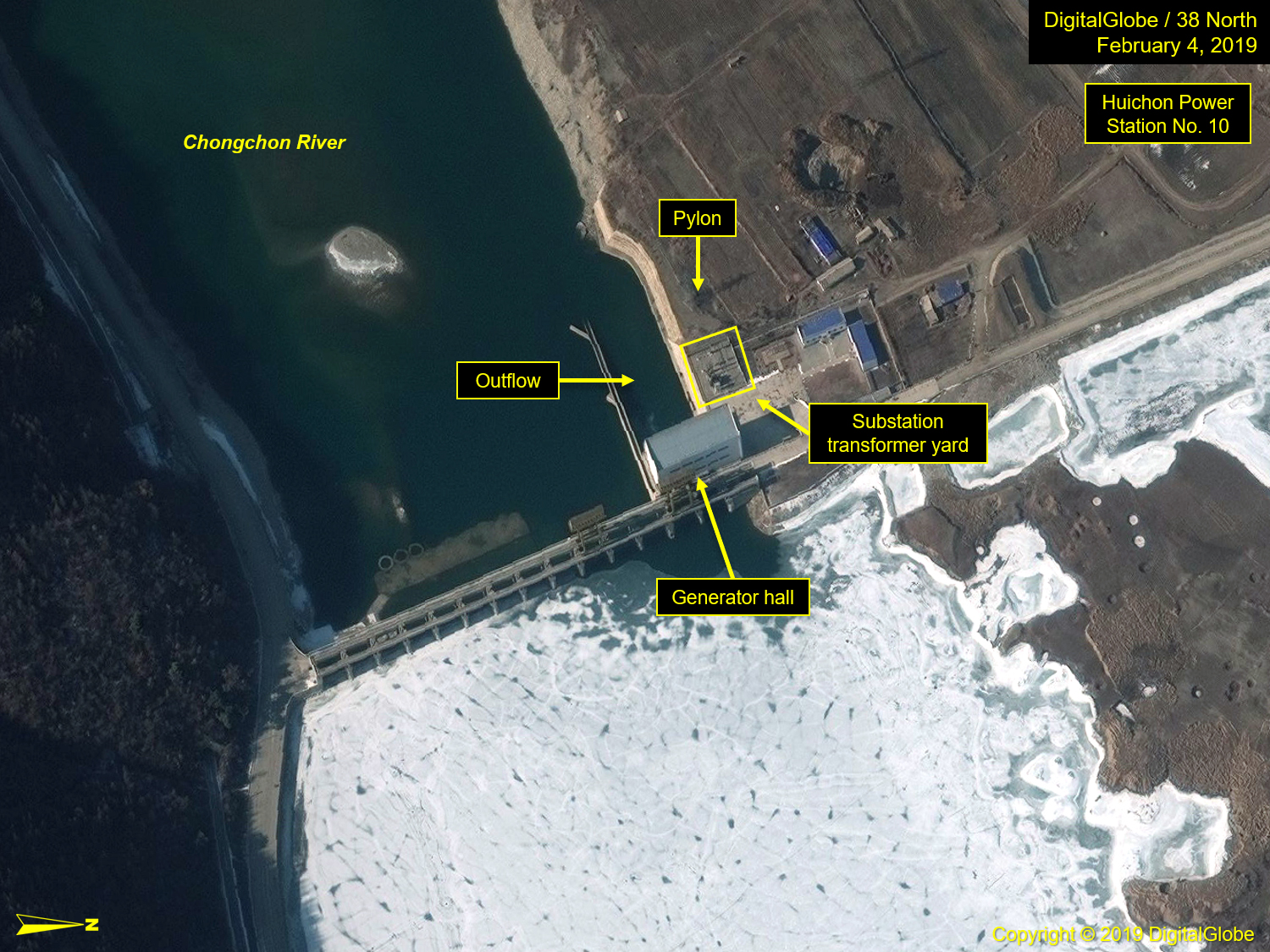 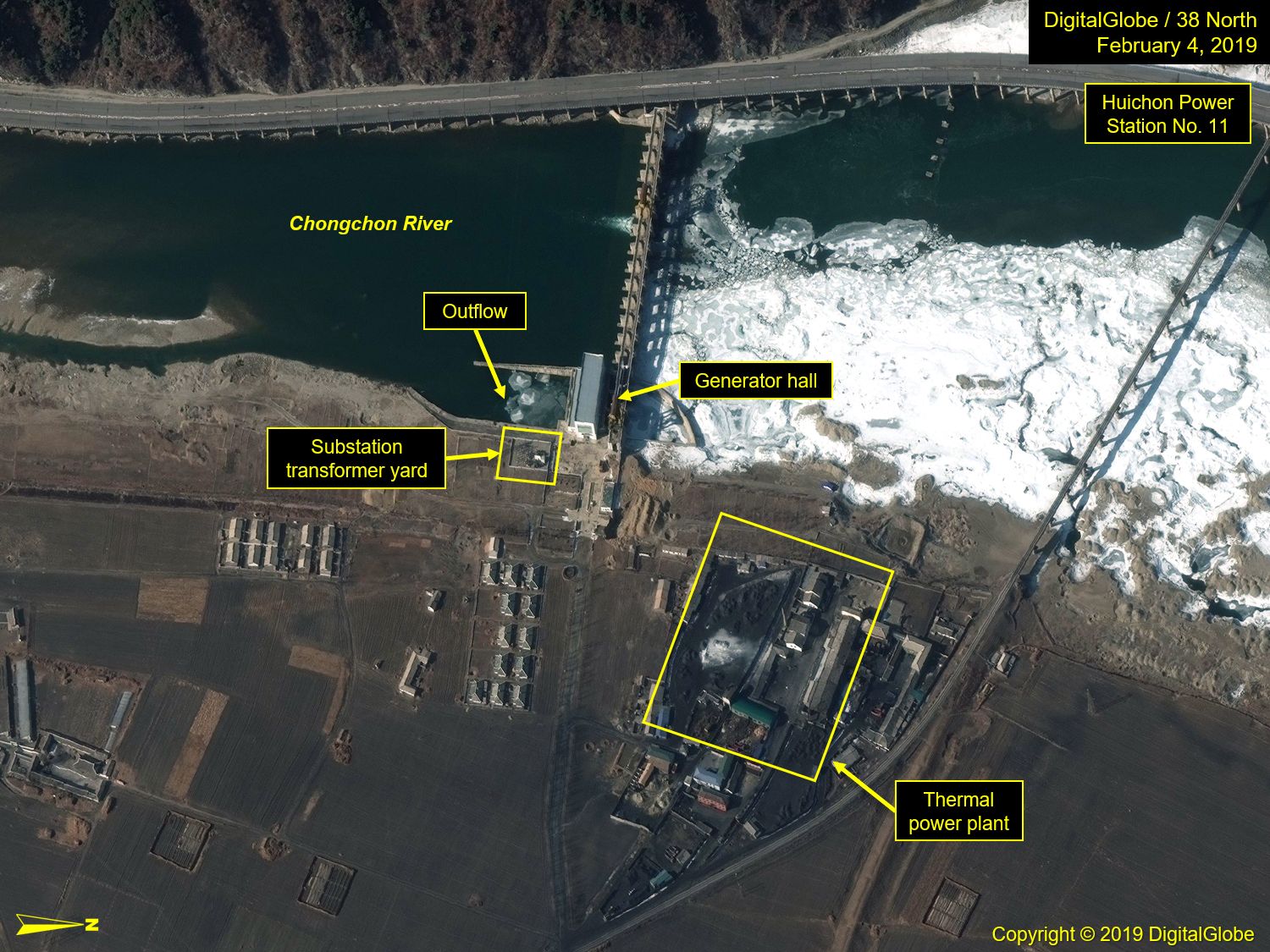 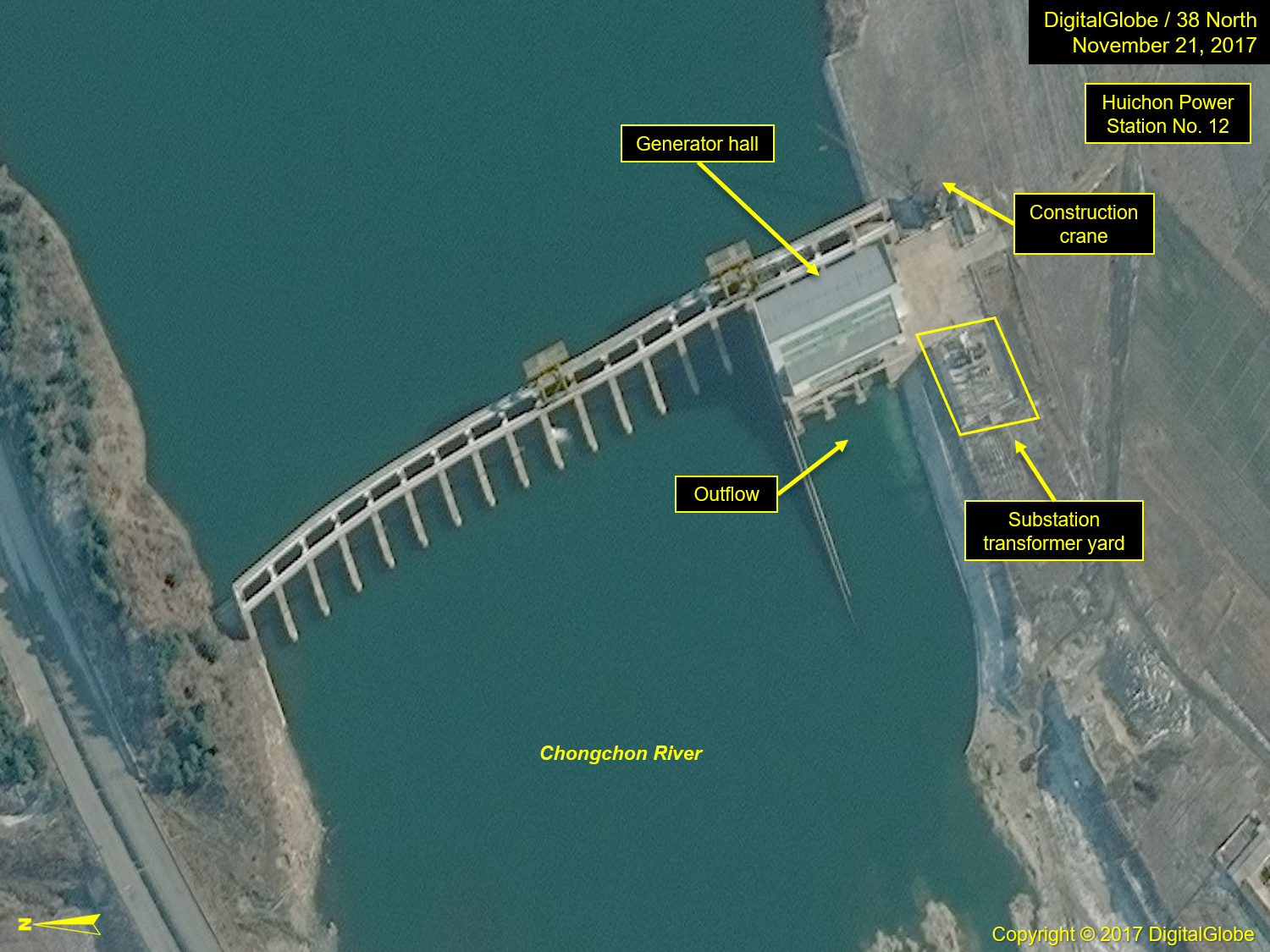 Going south from Huichon, the series of 10 dams terminates just north of Kaechon, near Pongchon-dong. Another dam project is under construction farther south near Junhyok-ri. That dam will be much wider than the others, suggesting it will create a reservoir wider than the existing river, although it is not likely to be very deep given the flat surrounding terrain. It is from this dam going south that the terrain flattens and the river meanders toward Anju and is no longer suitable for the construction of hydroelectric power plants. 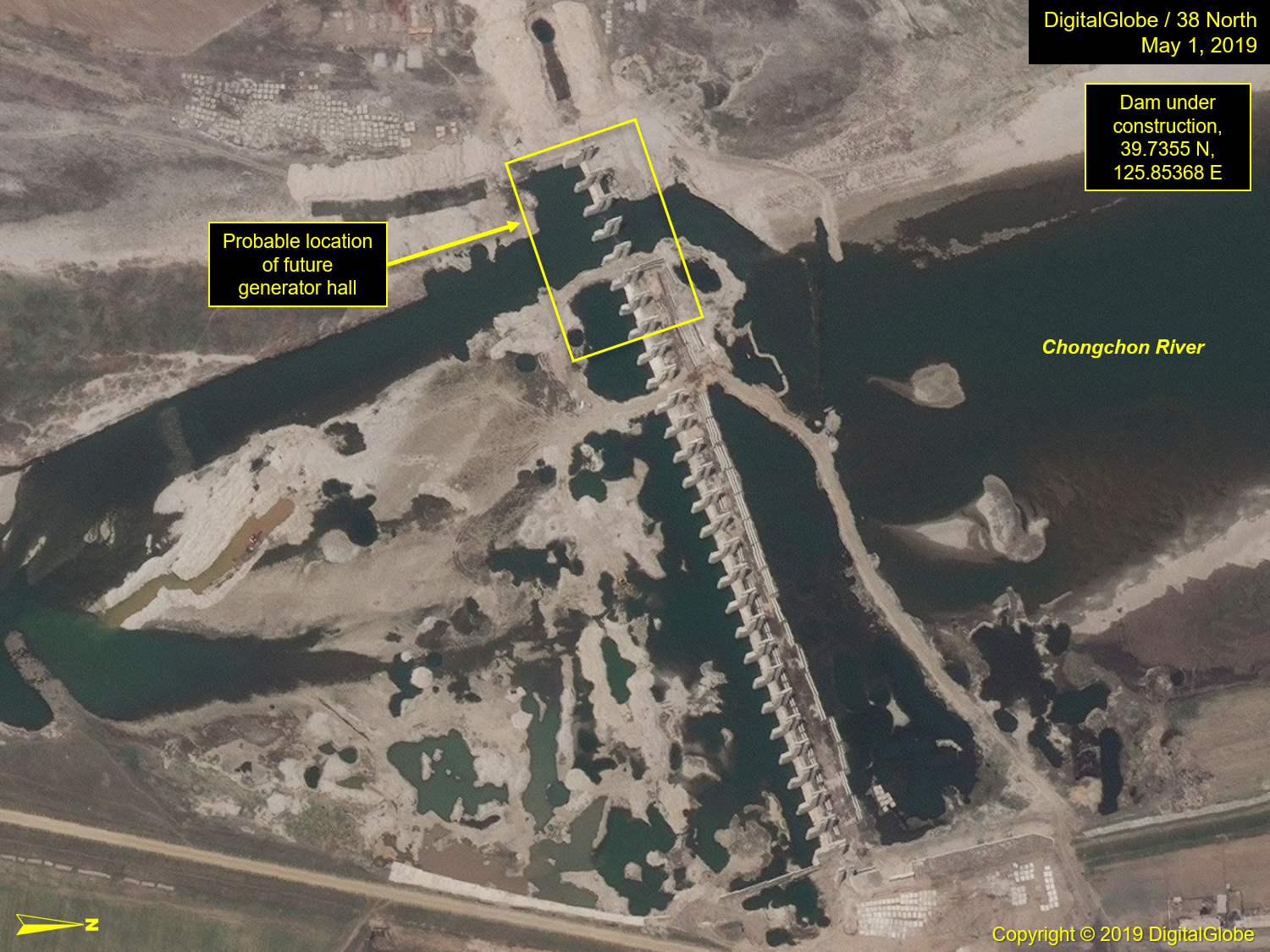 Despite a stronger emphasis on smaller hydroelectric power stations, there is still evidence that North Korea has not abandoned its desire to build large power stations capable of producing considerable amounts of sustained energy. For example, the large Orangchon Power Station was mentioned in a KCNA article dated May 28, 2019, stating: “The construction progress of the Orangchon Power Station is progressing apace. Remarkable successes have been made in the reservoir construction site.” It noted that Kim Jong Un had visited the Phalhyang Dam in July 2018 and had directed it be completed ahead of schedule. Kim’s personal directives, when visiting projects of interest to him, tend to move them along more quickly. However, while progress has been noted in the most recent coverage, heavy work at the site has been ongoing since October 2016, and the project does not yet appear to be nearing completion. 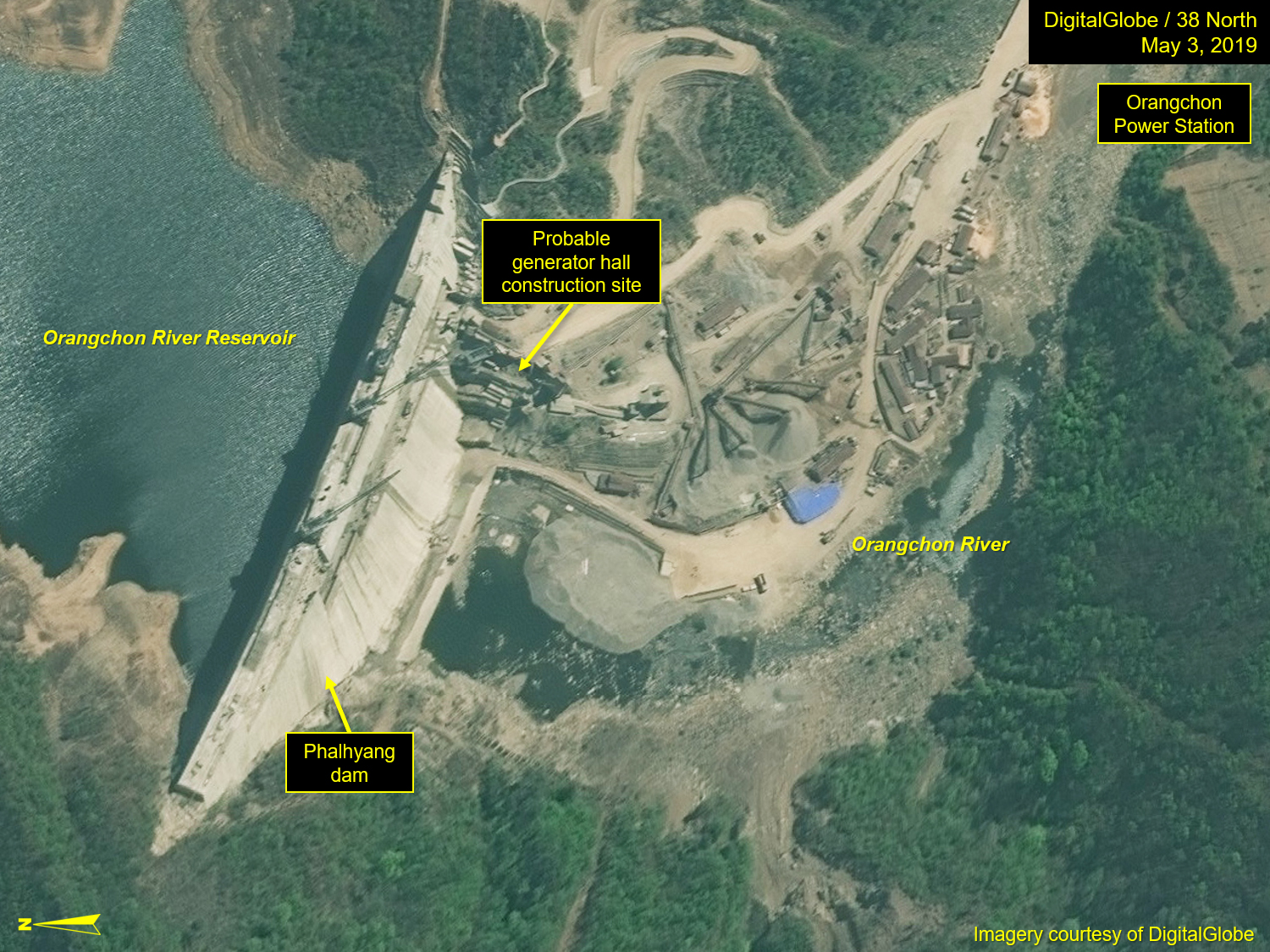 In addition to the Chongchon River project, other areas boast the presence of small-to-medium-scale power stations, the Changja River among them. Like those on the Chongchon River, most of the smaller power stations on the Changja River began construction around 2013 to 2014, although there is one large dam that was constructed much earlier and holds back a large reservoir close to the river mouth where it joins the Yalu River. At that dam, there is a large building that is unfinished or in disrepair; while it may have been intended to be a generator hall, construction at the site has long ceased although it is unclear as to why.

The remaining, smaller dams and power stations along the river appear operational, and one, the Hungju Youth Power Station, located near Kanggye, was cited in a news article on May 31, 2019. That article titled, “Minor Hydroelectric Power Stations Conducive to Economic Activities in the DPRK,” discussed how a second straight year of drought and high temperatures has strained the electrical output of the country’s larger hydroelectric power stations, and reiterated the move toward smaller, serial, hydroelectric dams.

The Huichon Power Station project was a great source of pride for Kim Jong Il. In a January 1, 2012 Joint New Years editorial following his death, the beloved former leader was applauded for his great accomplishments, and the Huichon Project was cited as a reflection of that. The article stated:

We should solve the problem of power shortage at all costs and on a priority basis. The sector of electric-power industry should continue to press on with the building of large-size hydropower stations and improve the operation of equipment and technical management at the existing power stations, so as to keep the generation of electricity going on a high level.

That message was repeated again over the course of the year in various forums, and in Kim Jong Un’s 2013 New Years address, he again highlighted the commissioning of the Huichon project, stating, “By adopting decisive steps to shore up the vanguard sectors of the national economy and the sectors of basic industries, we should develop coal-mining, (sic) electric-power on a preferential basis and provide a firm springboard for building of an economic giant.”

Achieving those goals has ultimately become problematic. Engineering setbacks, coupled with climatic challenges, have forced North Korea to alter its energy strategy. This change was articulated in a May 2019 KCNA article, which explained that weather had impacted the output of the large-scale hydroelectric power stations, and therefore the various provinces are increasing the output of their minor hydroelectric power stations to their maximum to support regional economic activities and peoples livelihood. The article cited several minor power stations across the country, which are trying to maximize production, and concluded, “It is the policy of the Workers’ Party of Korea to build minor power stations in a practical way and ensure their normal operation for bringing substantial benefit the people.”