Commercial satellite imagery from the month of August indicates only low levels of activity at the Yongbyon Nuclear Scientific Research Center with no indicators of reactor operations. Some objects have been placed near the Experimental Light Water Reactor (ELWR), although their purpose is unclear, and construction is likely underway on the nearby engineering office building.

Vehicles were observed near the 5 MWe Reactor in imagery from August. At least four and perhaps five vehicles were seen on the road east of the reactor on August 4, including three appearing to be cab-behind-engine trucks and one larger cab-over-engine truck. The fifth vehicle was most likely a truck or perhaps a small bus. By August 13, just two vehicles remained in the area.

By August 4, water in the Kuryong River was flowing quickly over the sluiceway and earthen dam. Monsoon rains in past years had caused damage to the reservoir dam. By August 13, the river level was higher, but the dam remained intact, although several silt piles, visible on August 4, were under water. By August 25, the sluiceway was wide open, and water continued to overtop the dam. This is the second year of seasonally heavy rains in which this water management arrangement has succeeded.

Consistent water flow to the reactors is important since it will provide the North Koreans with a stable supply for the ELWR, which will likely have higher requirements than the 5 MWe Reactor, if and when it is operational.

Between August 4 and 13, imagery indicates several objects had arrived on the road next to the ELWR. Their purpose remains unclear. It is unclear whether these objects remain next to the ELWR in imagery from August 25 due to the high nadir. However, the oblique angle enables a side view of the reactor building, showing three rows of three windows each on the east side of the ELWR, likely to allow natural illumination inside the surrounding square, multi-level building.

Construction continues on the engineering office building west of the ELWR. On the parking apron in front of the building, tarps covered two large objects or piles of material, likely for interior work as the building appears externally complete. By August 13, they may have been uncovered and dispersed somewhat on the concrete apron, but the image resolution precluded identification. In imagery from August 25, the materials remain uncovered on the parking apron.

The newly occupied buildings associated with the Radioisotope Production Plant near the Uranium Enrichment Plant (UEP) also appeared to be operational. Vehicles and unidentified equipment were present on August 25. While the function of the buildings is not known, they are connected by conduit to the Radioisotope Production Plant and could be associated with uranium hexafluoride (UF6) production.

At the UEP, what may have been a vehicle or some objects were seen in the receiving area/courtyard on August 4, but thin cloud cover precluded further analysis.

Figure 1. Vehicles observed near the 5 MWe Reactor on August 4 and 13. Several objects also observed at the ELWR, construction continues and materials are present at the engineering office building close by.

Figure 4. Possible vehicle or objects in courtyard obscured by cloud cover in UEP courtyard on August 4. 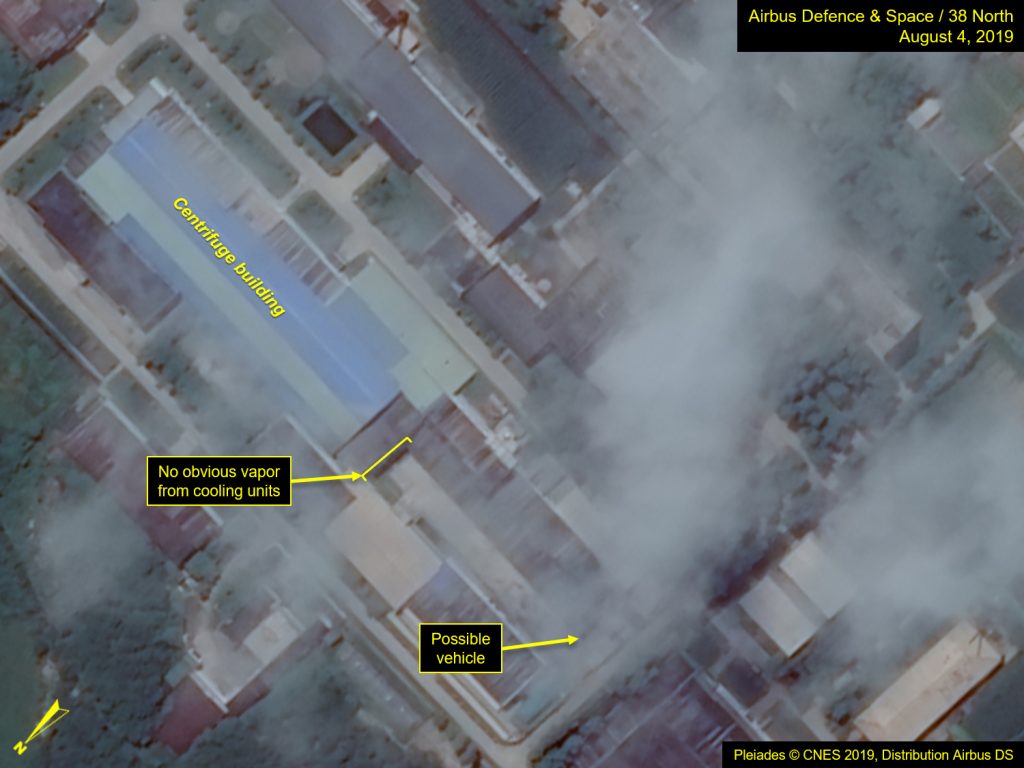 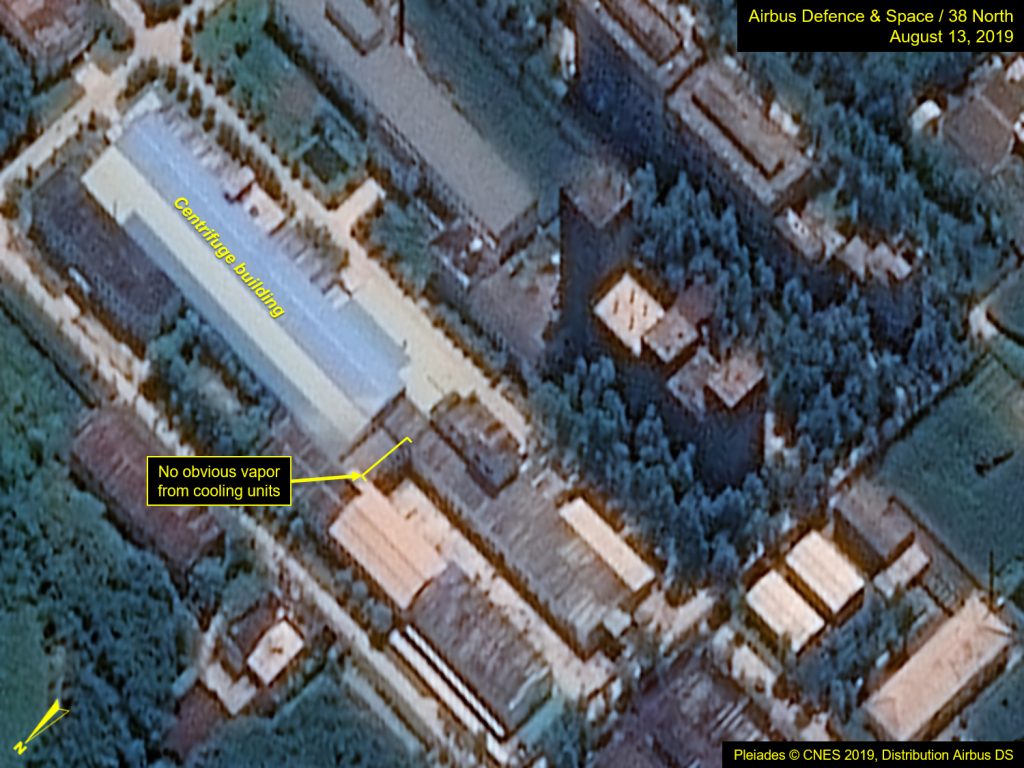