Commercial satellite imagery from November 14 shows military aircraft flight activity at North Korea’s Wonsan-Kalma International Airport that took place either just before or after the Combat Flight Contest-2019, a competition of the flight commanding officers of the Air and Anti-Air Forces of the Korean People’s Army. This was one of the largest displays in the history of this competition.

Official DPRK reporting of the event was issued on November 16, however, it is unclear how long that might have been after the actual competition. Kim Jong Un’s official plane, the “Chammae-1,” a Russian-built Il-62 (Classic) transport aircraft, was not present on the November 14 image (taken at 12:15 PM local time). However, a high level of personnel, vehicular and pre- or post-flight activity was observed across the airfield, suggesting that either he had not yet arrived or had recently departed. Most of the vehicles were cleared from the airport by November 16.

On the parking apron north of the passenger terminal, six MiG-29 fighter aircraft and six Il-28 bomber aircraft were parked wingtip to wingtip. Two generator trucks were also present, one parked next to an MiG-29 and the other next to an Il-28. In addition, personnel were milling about the aircraft, and an additional group of personnel was observed near aircraft support Quonset-type huts located behind the aircraft at the edge of the tarmac. These aircraft were observed in the same location on November 11 and 13. 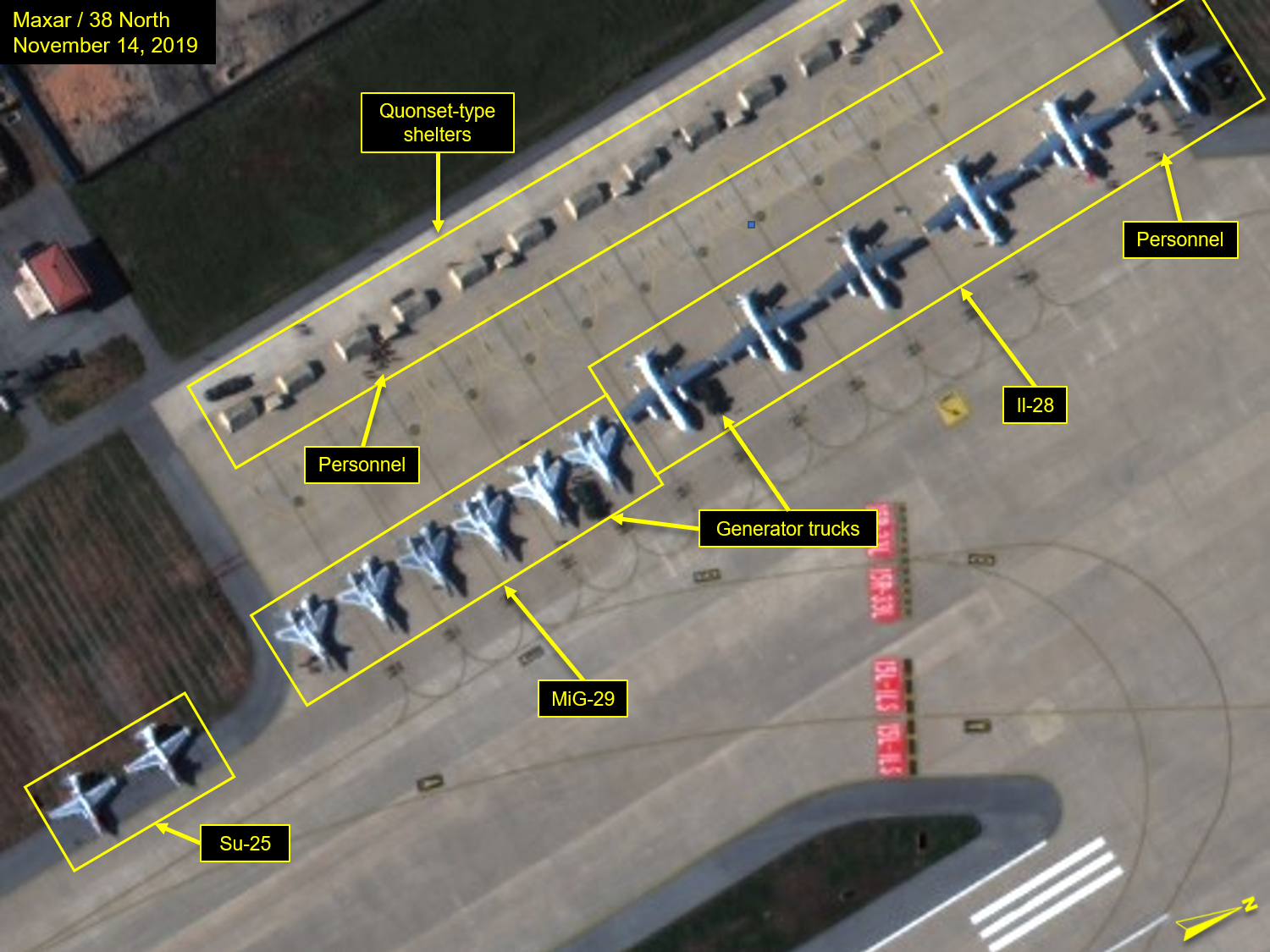 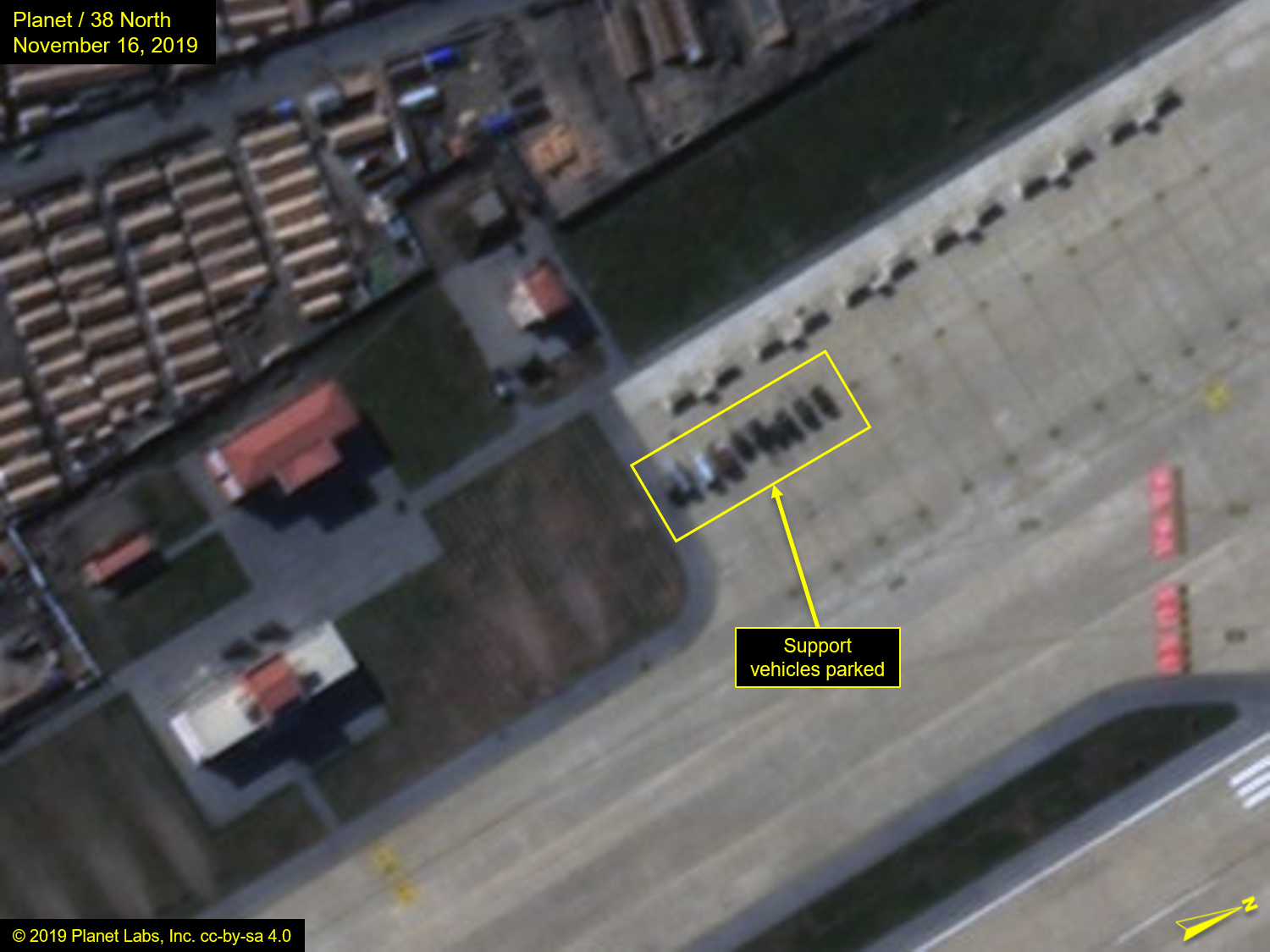 Parked wingtip to wingtip on the connecting taxiway continuing south from the main parking apron were eight MiG-17s and eleven MiG-15s, save for one MiG-17 and one MiG-15, which were pulled from their parking locations and appeared to either be just returning from or preparing for flight operations. A vehicle was pulled alongside of the MiG-17, and approximately ten personnel were next to or near the aircraft. In addition, a number of personnel were also observed near the MiG-15.

On the alert apron located at the south end of the airfield, thirteen MiG-21s were parked. Tens of personnel, some in formation, and five vehicles (one generator truck) were observed around the aircraft. Heat scorch marks could be seen behind the aircraft, indicating the aircraft engines had been in operation.

Eight An-2 (Colt) transport aircraft, six probable Hughes 500 or Mi-2 helicopters and six probable Mi-8 helicopters were present on the short auxiliary runway located on the southwest side of the airfield. Numerous personnel, some in troop formations, were observed around the aircraft.

Figure 3. Various aircraft and groups of personnel visible throughout the airfield.

On the parking apron located on the access taxiway, near the rail spur servicing the airfield, seven additional MiG-21 were parked wingtip to wingtip. Reserve fuel tanks, one for each aircraft, could be seen alongside each jet. Numerous personnel, some in two formations, and trucks were also observed.

Imagery taken on November 16 showed that all aircraft had departed the airfield except for eleven MiG-21s located near the rail transfer point. Four aircraft were parked on the apron, and seven were in a line, nose to tail, suggesting they will be moved. In addition, nine support vehicles were parked side by side on the main apron north of the passenger terminal.

Figure 4. MiG-21s parked at the parking apron near the rail transfer point, seven observed in a line on November 16. 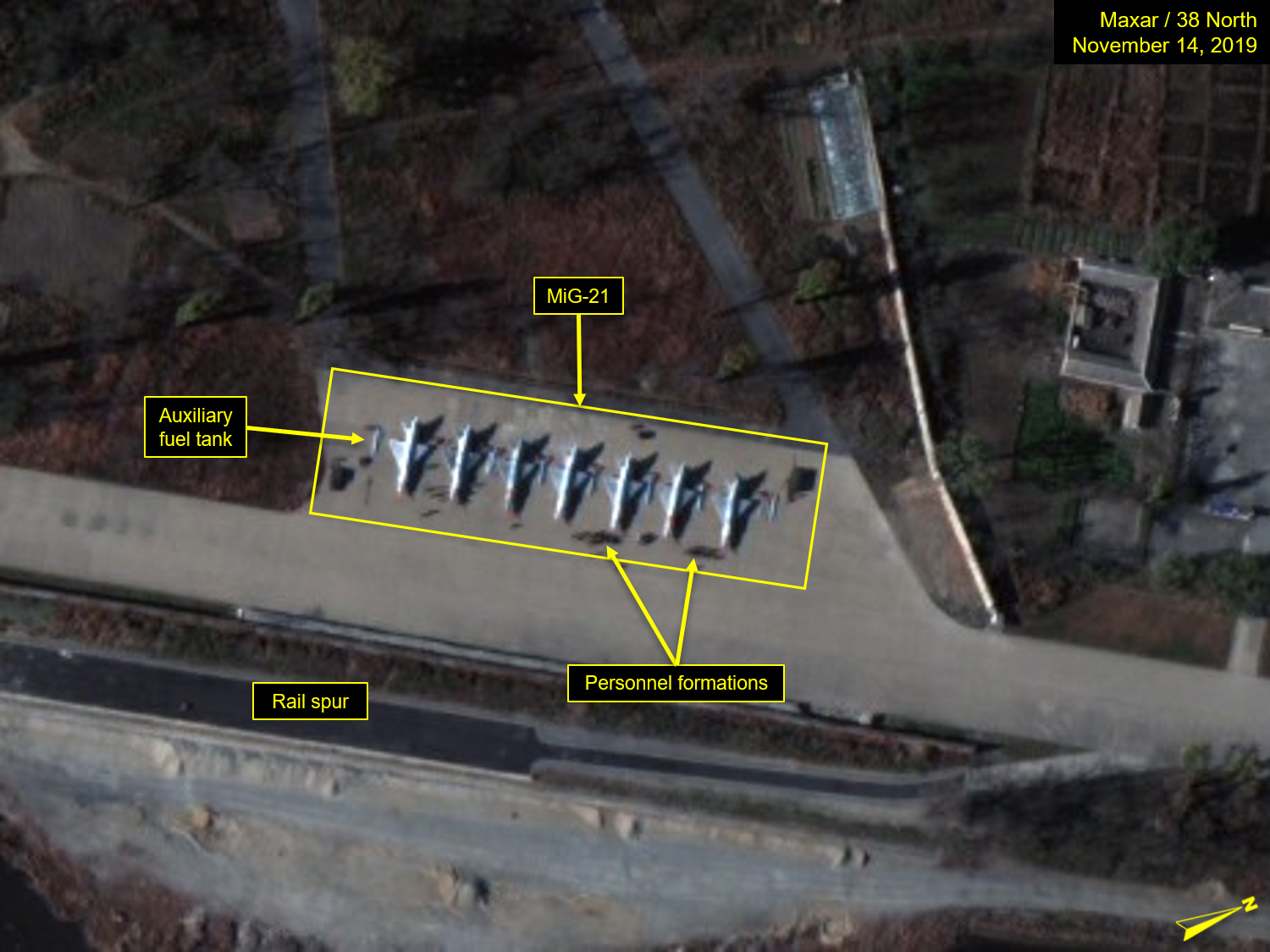 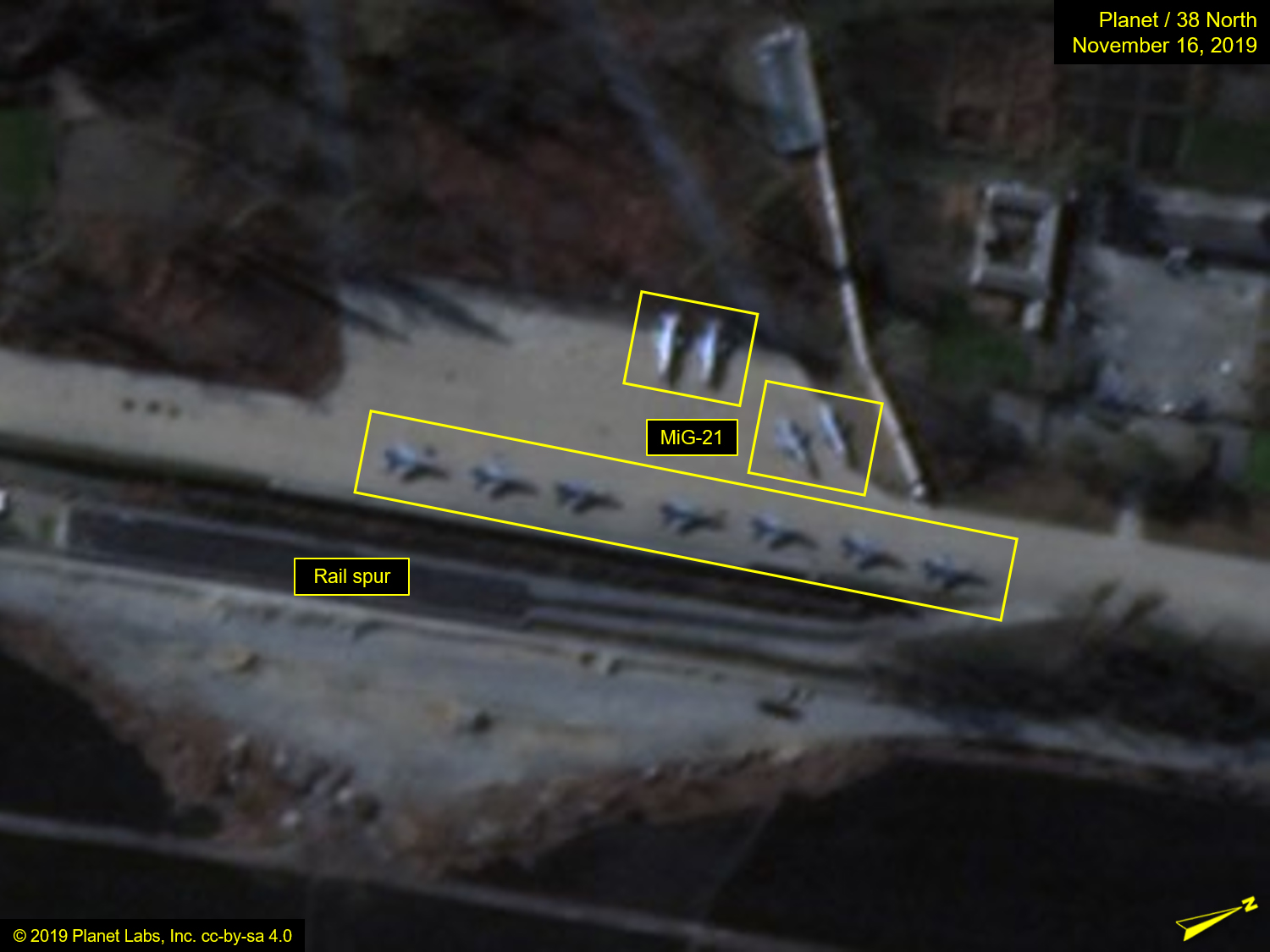