The North Korean government is gearing up for prolonged conditions of economic autarky, as reflected in its renewed commitment to boost fertilizer manufacturing and coal gasification efforts.[1] Over the past few weeks, North Korean officials and state media have increasingly focused on the chemical industry in particular.[2] Any progress North Korea makes in this area, however, will offer only a partial solution to one of its main economic challenges. 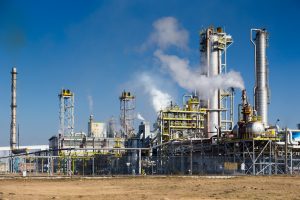 Since then, a number of North Korean officials have inspected similar sites and delivered the same message. On June 16, for example, Pak Pong Ju, vice chairman of the Central Committee of the Workers’ Party of Korea (WPK), according to the Korean Central News Agency, oversaw “brisk construction for establishing the C1 chemical industry” at “several units,” and “gave a pep talk to builders who are devoting themselves to the struggle for putting the chemical industry on a Juche and modern basis.”[4] A week later, Cabinet Premier Kim Jae Ryong visited several chemical industry sites in South Hamgyong Province, including the Hungnam Fertilizer Complex and the February 8 Vinalon Complex. According to the Korean Central News Agency report, Kim “underscored the need to further raise the sci-tech guarantee and economic effectiveness.”[5] Moreover, on Tuesday, June 30, a Minju Choson (Minju Joson) editorial “stressed that the chemical industry should take the lead in the ongoing offensive for making a breakthrough head-on.”[6]

The previous acceleration of coal liquefaction capacities began in 2016, shortly before sanctions pressure increased dramatically after the North’s nuclear weapons and missiles tests. It further increased in 2018–2019 with the oil embargo against the country. As the prospects of a breakthrough in relations with South Korea and the United States grow dim, it seems that the drive to renew the chemical industry is intended to mitigate the effects of a long period of expected economic autarky. Indeed, for some months now, state media and Kim Jong Un have emphasized difficult economic times ahead in the face of continued sanctions and COVID-19. The recent drive to reinvigorate the chemical industry is probably best understood in this context.

Although scaling up C1 chemical production capacities may be an efficient use of North Korea’s coal assets in the current context, it is also a relatively inefficient way for the country to replace imported sources for energy overall. One estimate from the Nautilus Institute, from early 2019, held that around 10 percent of North Korea’s oil supply could be replaced by coal gasification through one single unit that a Chinese company exported in that year. This is, of course, significant, but to truly make a substantial dent in the energy supply, North Korea would need to spend increasingly precious foreign currency to import a large number of such units. Moreover, truly revitalizing the chemical industry will also require equipment imports that may be difficult to manufacture or import due to sanctions, shrinking foreign currency reserves and the trade complications following COVID-19.

Using Coal to Muddle Through Under Sanctions

Sanctions have made both fuel and fertilizers harder to acquire, and since the state’s financial coffers have shrunk, the relative costs for importing these items have also grown. There is reason to believe that coal exports to China have started to increase as China loosens up on sanctions monitoring. Even so, because exports remain low, the opportunity cost is low for using more coal for domestic industry needs.

North Korea has long suffered fertilizer shortages, and has often depended on handouts from China and, in some years, South Korea, to shore up its supply. This has been an Achilles’ heel for North Korean agriculture ever since the early-1990s when oil subsidies from the Soviet Union ended and those from China were reduced. Moreover, the COVID-19 lockdown of the border to China may have emphasized this vulnerability. North Korean farmers typically prepare for the planting season during the first few months of the year. According to Daily NK, farmers in the southern breadbasket regions reported that fertilizer supplies from the authorities were abnormally small this year due to the border lockdown.

The coal gasification expansion drive goes back several years. North Korea has for a long time sought to decrease its dependence on oil imports from China by building up its capacity for gasification of coal through the C1 chemical industry. This dependency on Chinese oil and fuels puts North Korea in a highly vulnerable position, and gives China enormous political leverage over the country. The government is also looking to use the country’s abundant coal assets in a more efficient way. Even though illicit coal exports are likely significant and increasing, North Korea likely earns much less than it otherwise would have because buyers must get compensated for the risk.

The state’s push for the C1 chemical industry may modestly mitigate North Korea’s shortages of fertilizer and fuel and increase the share of domestically manufactured chemical inputs in the country’s industry. Nonetheless, potential bottlenecks abound, and reporting by Daily NK suggests that even the Sunchon Phosphatic Fertilizer Factory, a high-priority project given Kim Jong Un’s personal visit, is still facing such problems. North Korea will still have to import vital factory equipment. Moreover, boosting chemical industry production will not significantly increase the country’s export revenues since it is intended for domestic industrial consumption. Truly scaling up this industry would require the state to dedicate significant financial resources to it, but there are few signs that the government is prepared to change its allocation priorities away from funneling more resources to public showcase projects such as the Pyongyang General Hospital and refurbishments of cities. For all these reasons, efforts to improve the C1 chemical industry may offer only a limited answer to one of North Korea’s main economic challenges.