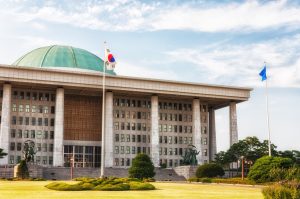 I have read Aidan Foster-Carter’s interesting article, “The Right Question, The Right to Question: Thae Yong-ho Versus Lee In-young.” As a former US diplomat in charge of reporting on South Korean domestic political developments from 1987 to 1990 and, since retirement, in a business that does a lot with Korea, I have followed events there closely. I’d like to add a few points to help readers, especially Americans, put the article in perspective.

First, no matter how “interesting” it is, the Thae-Lee brouhaha was not important. The general public in South Korea doesn’t care. Lee In-young has been in politics a long time and elected to office several times. He was leader of the National Assembly, roughly a combination of Nancy Pelosi and Mitch McConnell in the unicameral legislature. In the public’s mind, he has been thoroughly vetted. And the public has a lot of inherent respect for student leaders from the 1980s; it remembers that democracy didn’t appear like magic in 1987. Moon Jae-in’s presidency is the third progressive administration in South Korea, one big reason the argument that pro-North Korean fifth columnists are going to turn the South over to the Kim regime has drawn a big yawn, and so have the “have you stopped loving Juche, yes or no?”-type questions of former student activists.

Second, so why did Thae do it? One reason is that the “secret lovers of Juche” trope has long been red meat for many conservatives, and they like to hear it because it makes them feel good. But it is not the main reason. In the parliamentary election of April 2020, the conservatives took it on the chin; all of their leaders lost their seats. Important regional elections are coming in April 2021, and the next presidential election will be in May 2022; the conservatives have to reorganize themselves soon. Despite the tsunami of the progressive victory, Thae managed to get elected. With a vacuum of leadership in his party staring him in the face, it is adroit of Thae to try to fill some of that space. Attacking Lee In-young is a twofer. It shows he knows which meat is red, and his performance art goes a long way to dispelling the lingering doubts that Thae is a Manchurian candidate. He has to get rid of his own history with Juche.

Third, the rise of the student organization Lee is associated with, Chondaehyop, occurred during my watch in Korea. I had many hours of discussions with student leaders between 1987-1990, including attending one of its national rallies and spending all day there talking to kids from universities throughout the country. They were anti-Chun Doo-hwan and Roh Tae-woo because they were pro-democracy, and pro-unification because they were Korean.

They thought Chun, with the help of the US, refused to act on unification, and that North Korea was kept as a boogeyman to boost the ruling elite’s power. They were impressed that the North talked a good unification game whereas the South did not.

Of course, I pointed out the differences between North and South Korea and asked about Kim Il Sung. Not one of them professed any sympathy for Kim. They had no illusions that he was anything but a dictator, and they hated dictators. And surprisingly, not one said the US-ROK alliance should end; and all readily agreed that the United States should defend South Korea against a North Korean attack. They even looked shocked when I asked the question; it had never occurred to them that America would not come to the South’s defense in these circumstances.

Even the few who thought US troops should leave Korea said they would immediately come back if North Korea attacked. Lee and the other Chondaehyop kids were never pro-North Korea. Aficionados will remember that when Chonedaehyop, with much fanfare, sent Ms. Lim Su-kyong to North Korea, the North Koreans couldn’t get rid of her fast enough when she included in her speeches that unification took priority over any particular ideology.

Fourth, Juche is sometimes short-handed as “self-reliance,” but that is way too simplistic. Essentially, it is an ideology that says mankind is the ruler of the physical world, and that mankind can achieve anything by applying its will. Conveniently for the Kim regime, Juche adds that that achievement can only be attained by single-minded, total devotion to an all-wise leader. The students I talked to back in the day all saw though this as a justification for dictatorship. It should also be noted that Catholicism greatly influenced progressive thought in Korea. Kim Dae-jung was a devout Catholic, and so is Moon Jae-in. The late Cardinal Stephen Kim Sou-hwan defended and protected the democratization movement, and the late Kim Geun-tae, Lee In-young’s political mentor, was also an active Catholic. Catholicism and Juche don’t mix well.

Lee In-young treated Thae Yong-ho with more than a little condescension in their exchange. Grace and tolerance are always good politics, but perhaps Lee was a little justified in his response.