North Korea’s topography, climate, and soil quality make its endeavors to be self-sufficient in food production a constant struggle. Despite being about the size of the US state of Mississippi, roughly 120,538 square kilometers, less than 20 percent of that land is arable. The majority of the country is rugged mountain terrain with dry conditions and poor soil. Even in the arable regions in the southern and west coast provinces, the climate dictates relatively short growing seasons.

With already limited agricultural potential, the regime recognized around 2011 that its preferred livestock, mainly chicken and pigs, were also dependent on the country’s agricultural production for feed, placing greater demands on overall food production. This realization led the regime to shift its focus, promoting instead the raising of grass-fed livestock, such as goats, sheep, rabbits, and cattle. This also led to a decision to shift farming practices in higher elevations, where soil and climate conditions were suboptimal, from crops to grassy fields for grazing.

In 2012, North Korea initiated the transformation of the Sepho Tableland in line with a new strategy of turning “grass for meat.” It is an area covering over 30,000 hectares of land at elevations ranging from 300 to 600 meters, and stretching across the counties of Sepho, Phyonggang, and Ichon in Kangwon Province.

Kim Jong Un provided an overview of the changes that were needed in the region in a speech about animal husbandry in January 2015, reported by the Pyongyang Times. While the climate and topography were suitable for grazing, the existing vegetation was not. Weeds and scrub bushes had to be reduced, and new grasses introduced that were scientifically selected to contain the proper nutrition for the livestock.

Moreover, a whole new farming infrastructure was needed. This included housing, for the farmers and workers, as well as the animals, along with farm and community support facilities such as an animal and agriculture research facility, veterinary and anti-epizootic centers, and a livestock feed processing plant to ensure a year-round food supply for the animals. It also required healthcare and other social service facilities for the health and well-being of the farmers and workers.

Finally, in order to get products to market, a meat and a milk processing factory were also planned, along with new roadways around the region.

But the success of this initiative also required a culture change: moving people away from raising animals that eat grains toward grazing animals. In 2013, Kim Jong Un directed people not to keep domestic animals that eat stock feed, such as pigs and chickens, but rather to raise rabbits, sheep, and goats.

Commercial satellite imagery, from 2013 to the present, show the transformation of the Sepho Tableland. Prior to 2013, this area was largely undeveloped with collective farms and little villages dotting the landscape. Many centered around the nearby towns of Sepho, Phyonggang, and Ichon-up. Those farming villages mainly consisted of individual homes enclosed by fences to pen in the family livestock. Collectively, these people would cultivate the adjacent fields, growing crops, which, for the for the most part, were incompatible with the lands.

Figure 2. An exemplar collective farm at Sepho before development.

One of the first mentions of North Korea’s plans to transform the tableland was in December 2012, when they were seeking ways to alleviate the country’s perpetual food shortages. In the spring of 2013, imagery showed workers’ construction camps began to emerge across the Sepho region, and by 2014, a new research facility and adjacent veterinary and anti-epizootic center were under construction. Additionally, livestock facilities began to emerge across the region.

Kim Jong Un ordered further development of this region in a speech in January 2015, calling for the conversion of the Sepho Tableland into a “large-scale livestock farming base,” and for speeding up construction of “houses, animal sheds, public buildings and other architectural structures and road work.”

The first of the livestock facilities revealed a basic construction design, which proved to be the basis for those to follow. A descriptive reference of these livestock facilities appeared in a Pyongyang Times article from August 13, 2016, which went into great detail about the types of housing being built, distinguishing them by function. It stated:

The houses are eye-catching in particular. A mere sight of the roof tile color tells the viewer what kinds of houses they are. Those crowned with green roofing tiles are dwelling houses combined with animal houses, and those with red tiles are those for pasture keepers. The houses are flawless in every aspect such as structure, area and construction and each of them has a 5-cubic-metre methane gas tank.

Fodder grass is dried and stored on the two-storeyed animal houses.

The description of the roofing colors provides an indicator for assessing the project’s growth in the region. The older homes and farms are drab in color, whereas the new facilities stand out with their brightly colored roofs that distinguish their functions.

Satellite imagery confirms that there are fundamentally two basic livestock facility designs, which will be referred to as “Type-1” and “Type-2.” Type-1 is the earliest observed, dating back to 2014. These consist of a large, “C”-shaped livestock barn with a fence stretching between the two ends of the “C,” creating a large, subdivided animal pen. This allows the animals to move freely between the sheltered housing and the pens without going to pasture.

These “C”-shaped barns have a caretaker’s housing unit located on the open side, and two to three open-sided structures for harvested grasses located to its rear. The Type-1 structures can be a single unit located by itself, or a series of two or more located together, normally in a linear arrangement. Depending on the numbers of these facilities clustered together, additional housing units may be present. The common denominator for all buildings is their roof color, which appears to be a greenish color, indicating that the animal keepers reside on site per the aforementioned article.

The Type-2 livestock facilities differ significantly. While their layouts vary slightly from each other, their elements are similar. They generally include two or more livestock barns arranged in a parallel configuration, with several linear fodder storage sheds, typically parallel to the barns (although some may be laid out in modified herringbone fashion).

The telltale reddish roof coloring signifies that there is no caretaker housing collocated with them. Instead, the housing units for the “pasture keepers” are usually found nearby. They are arranged in clusters from as few as four to as many as eight units, with some of these housing areas having one or two additional “services” buildings collocated with them.

While there are two basic types of livestock facilities, their size, configuration, and layouts have changed slightly over the past several years. These changes are, presumably, a result of improved practices learned during this period.

KCNA reported that the Construction Shock Brigade 922 had been assigned to support the construction of these facilities since 2012. The unit’s presence was first observed on imagery from 2013, where the brigade’s housing and support building could be distinguished by their dark blue roofs. These brigade camps were normally located adjacent to the housing, livestock facilities, or support-function buildings they were constructing.

With the arrival of the brigade and the beginning of construction, placards began to appear across the landscape, announcing the new initiative.

Construction included new livestock facilities and housing units, as well as key facilities that were essential to the long-term success of the project. Among them is a livestock and agricultural research center, two veterinary and anti-epizootic centers, the Tableland Management Office, and a large processing plant complex for meat, milk, and feed.

Figure 8. On the ground images of the Phyonggang processing complex.
Note: Hover over slideshow and click on left/right arrows to navigate.

In November 2020, Korean Central Television (KCTV) released video of the Sepho region, showing an abundance of livestock, people working inside research laboratories, and the active interiors of the meat, milk, and feed processing plants.

Imagery from the same month reveals the presence of animals at several livestock facilities or in their adjacent pastures. However, when the entire Sepho region is viewed, evidence of a bounty of livestock is not apparent. Instead, greater growing and harvesting activity is observed.

This does not necessarily mean that North Korea has given up its vision for this region. On the contrary, while livestock facilities were constructed at a rapid pace, the acquisition and breeding of herds takes time, as several seasons are needed for herds to expand. Furthermore, slaughtering animals too early can also stymie growth.

What we do see is that there are now well over a hundred livestock facilities dotting the Sepho Tableland landscape, and more continue to be added. It is therefore possible, that at some point in the future, the livestock population will reach North Korea’s strategic target. How that achievement will impact the country’s chronic food shortages, is yet to be determined.

Figure 9. Research and veterinary centers.
Note: Hover over slideshow and click on left/right arrows to navigate.

Figure 10. Site of veterinary and anti-epizootic center in Ichon-up, November 2012. 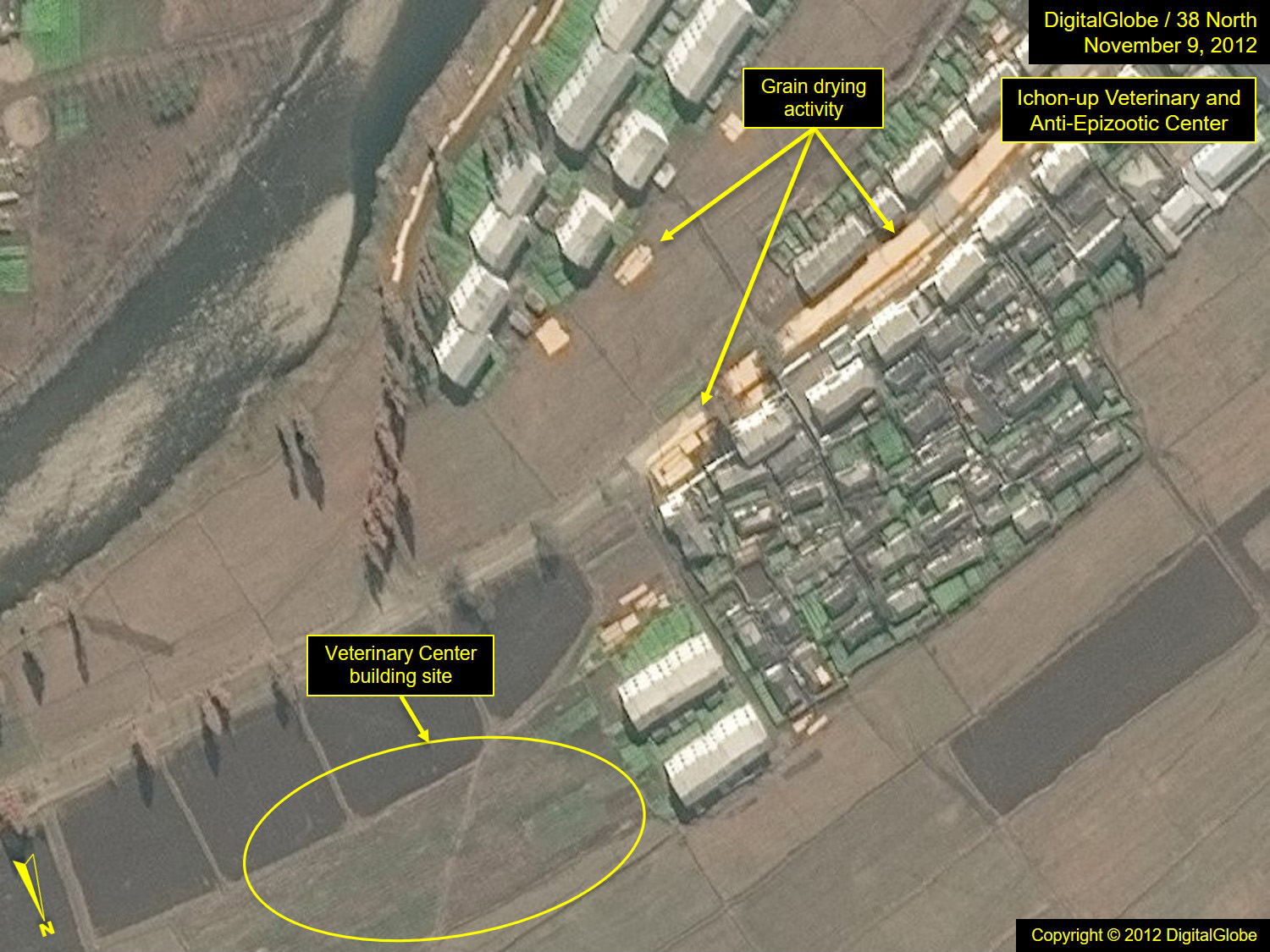 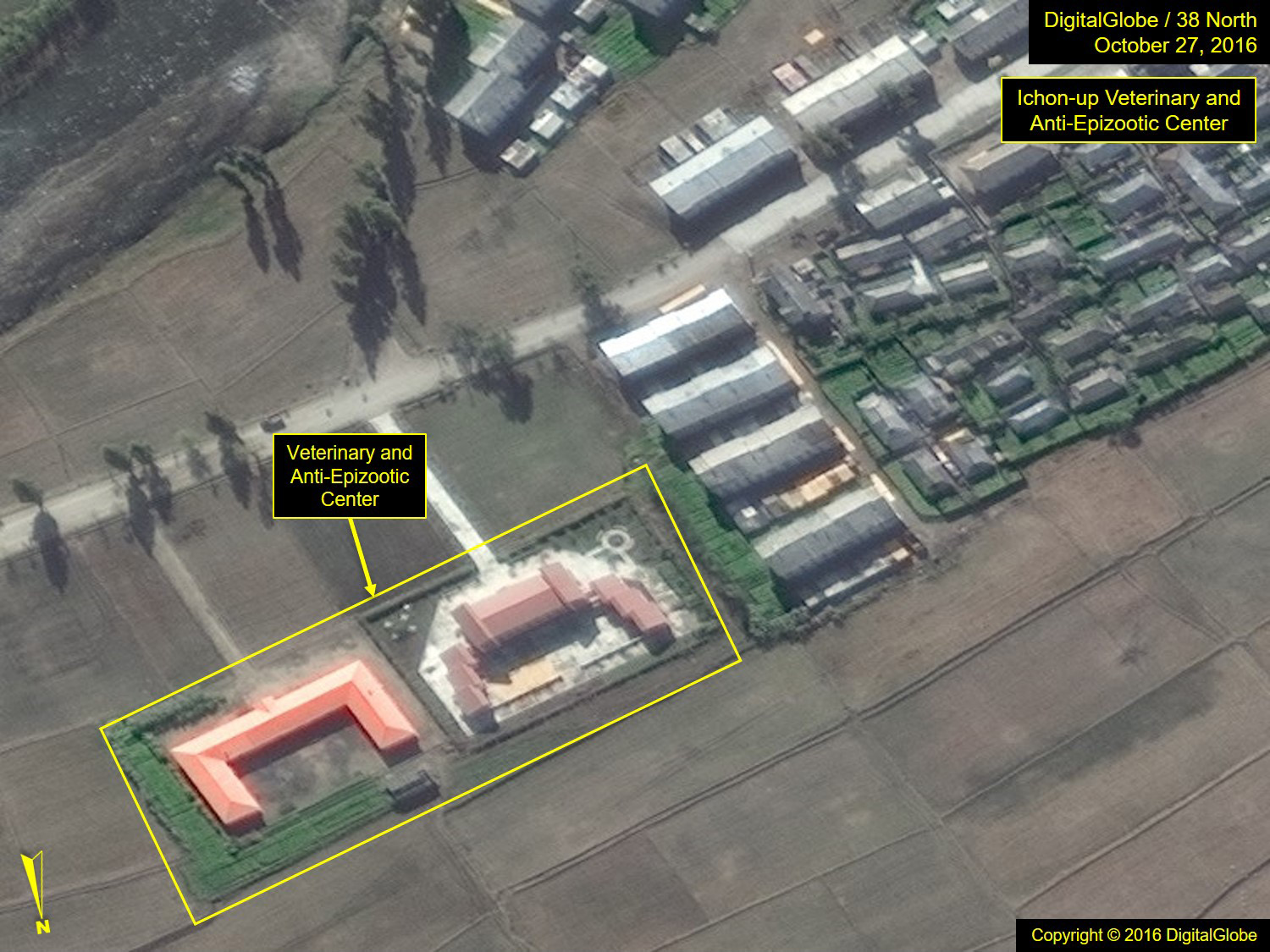 Figure 12. Workers’ housing and hillside slogan in Sepho.
Note: Hover over slideshow and click on left/right arrows to navigate.

Satellite imagery allows us to assess the buildup of livestock facilities throughout the Sepho Tableland, but it is difficult to determine what that means in terms of actual output. It is clear that the efforts to transform this region have been underway since 2012, which accelerated in 2015 and 2016, and have made gradual progress since then. However, while the infrastructure is largely in place, this does not mean it will generate immediate results. Seed animals are needed, followed by several breeding seasons for herds to grow; and slaughtering animals too early will stymie that growth. Further monitoring of various sources is necessary to determine what impact the Sepho Tableland will have on North Korea’s overall food production.