Commercial satellite imagery indicates early progress on the construction of thousands of new apartments at two sites in Pyongyang. Demolition and ground clearance work began at both locations—one in central Pyongyang and one in the city’s Sadong District—immediately after visits by Kim Jong Un in late March and early April.

The apartments are part of Kim’s pledge made at the Eighth Congress of the Workers’ Party of Korea (WPK) in January to build 50,000 apartments in Pyongyang over the next five years.[1] The quick start and high profile of the two projects are part of the daily propaganda that encourages citizens to work hard to accomplish the numerous goals set out at the meeting.

Kim visited the site around March 25 and again around April 1.

By April 8, satellite imagery shows buildings have been demolished and the ground largely cleared. Work is underway to prepare for construction of the new buildings. The roads around the area have been shut off to normal traffic, and a housing camp for workers is observed on the riverbank next to the area.

Images of the development plans show this will be home to about 50 new low-rise apartment buildings, some of which will be terraced because of a steep slope on one side of the site. State media says the entire development will include 800 apartments.[2]

When Kim visited in late March, state media hinted at some dissatisfaction by Kim and said his visit was to “clarify” plans for the development. It went on to say that Kim has noted: “…our officials lack knowledge and common sense of urban greening and designing of cityscape and are also indifferent to them.”[3]

As a result, Kim is said to have told them “to do the city construction by fusing buildings and nature into one and laying out the living space and ecological space in a scientific way so as to ensure the organic combination of work, relaxation and traffic.”[4]

When he visited in early April, Kim reportedly told officials to ensure that “equipment and building-materials [be] provided without fail” and there should be “strict supervision” over the project and materials be “economized in every way” due to high demand.[5] Several other high-profile construction projects in the country have been previously delayed, and Kim will want to avoid missteps with the first of what will probably be a series of projects over the next five years.

The Sadong District project in the southeastern part of the city is much larger than the Pothong River apartment site. Plans call for high-rise apartment buildings along a central avenue in the development. The largest of the towers appears to be 52 stories high, and many others are between 20 and 30 stories, according to renders displayed on-site at the groundbreaking.

Figure 6. A render of the site shows several high-rise buildings.

State media said the development would create 10,000 apartments on the site, which is alongside the Taedonggang Beer Factory.[6]

At the groundbreaking, blasting of dirt was conducted, and earthmovers began operation, according to state TV images. The ceremony was attended by thousands of workers, which indicates the scale of the project. Setup of a workers’ camp alongside the site commenced in early March.

Medium-resolution satellite imagery from April 9 shows progress on the new building foundations, just over two weeks after the groundbreaking. 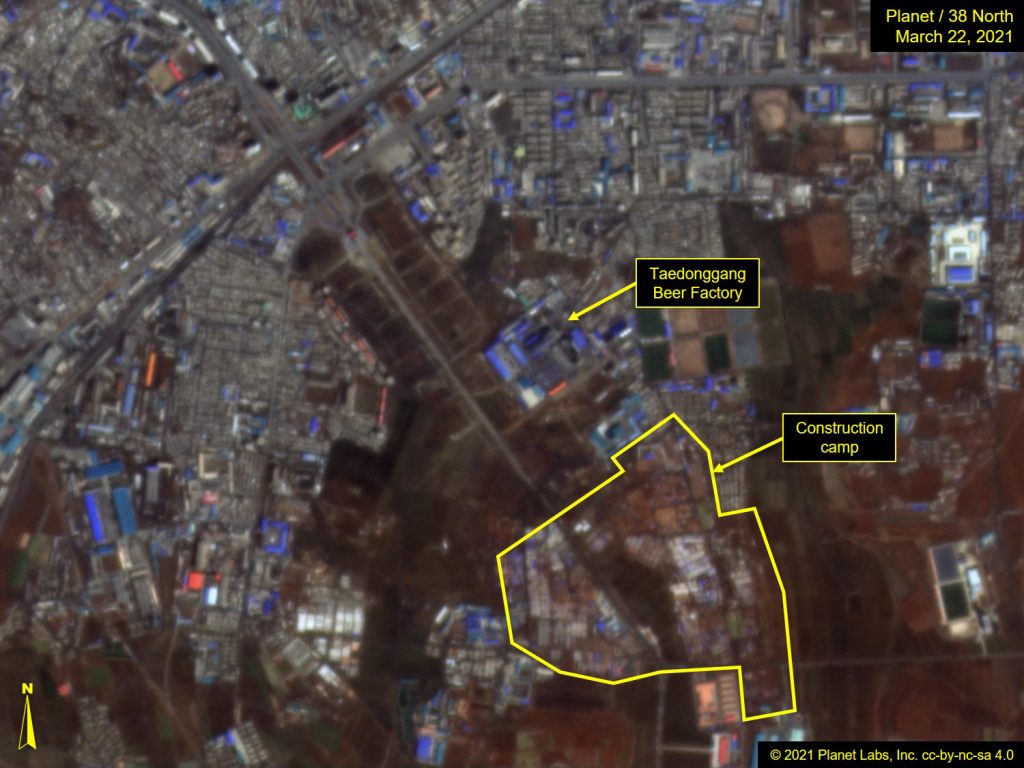 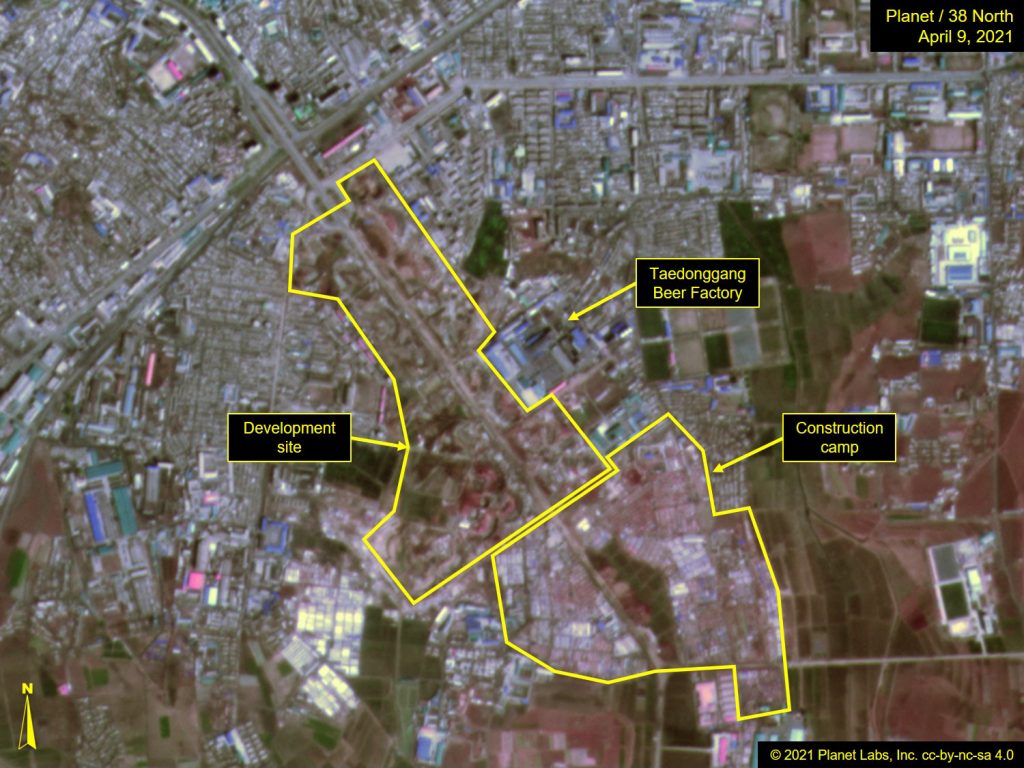 More construction projects may be in store for the Sadong District. A billboard at the site showed a map that included buildings in areas immediately surrounding the site that do not currently exist. One area in particular, immediately to the west of the construction site, is now filled with residential houses but appears on the map as several large buildings. 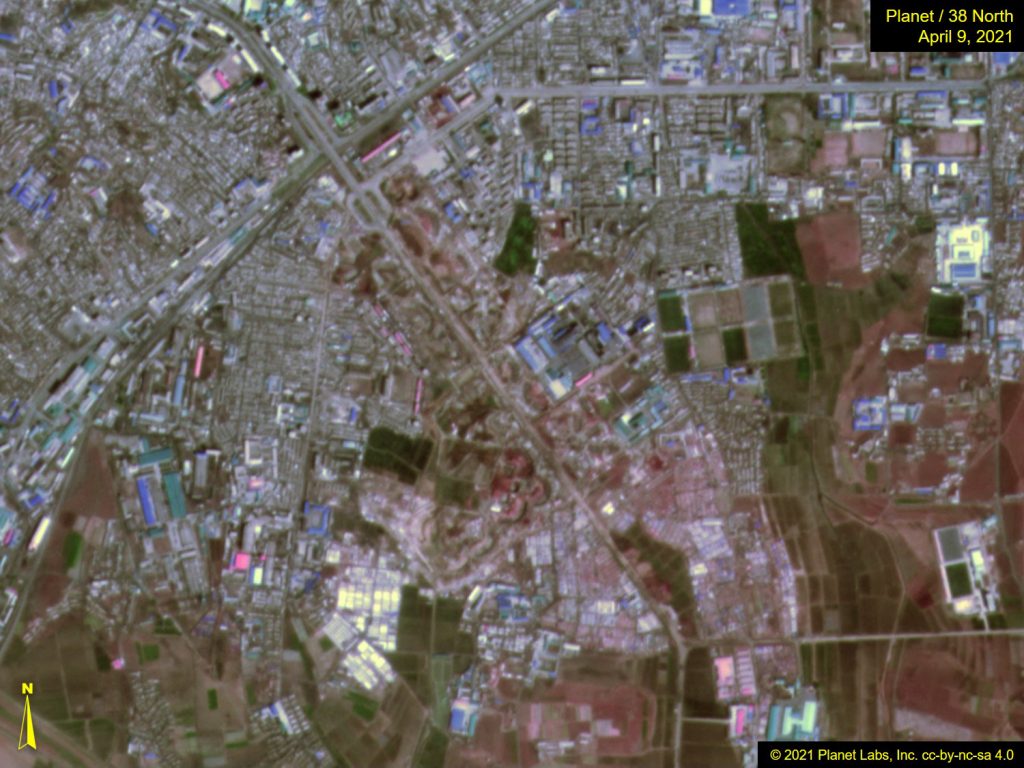 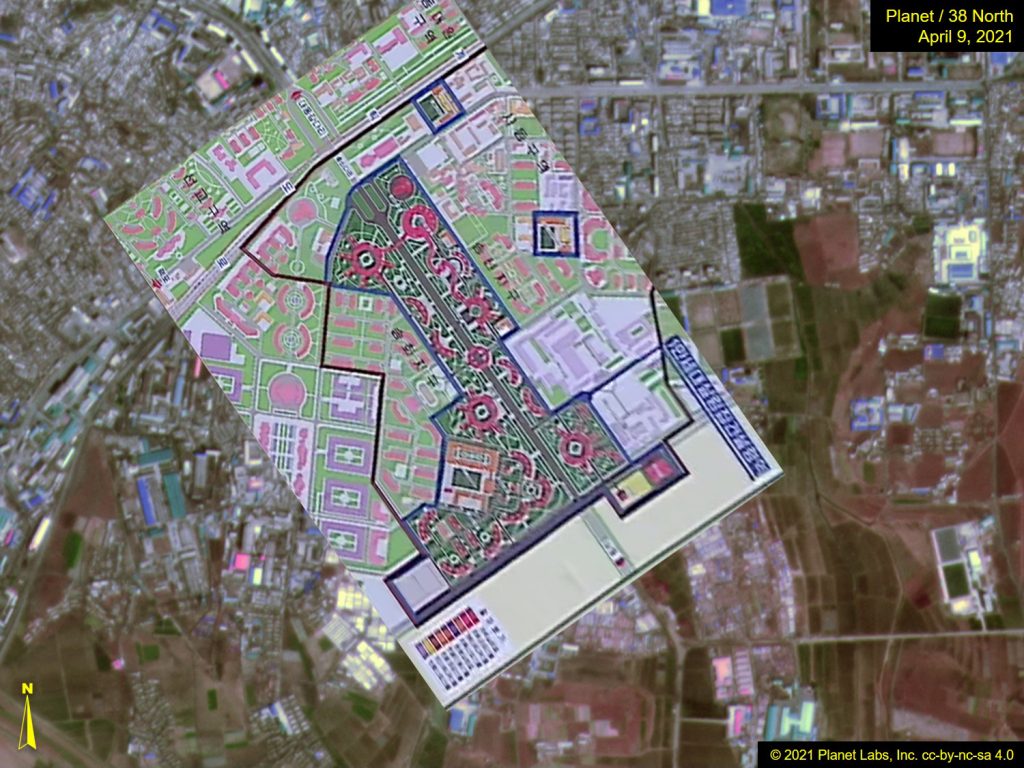 Many of the major construction projects in Pyongyang over the last decade have been located west of the Taedong River. Large areas of residential housing still exist on the eastern side of the city, and it appears the Sadong District apartments will be the first in a series of ongoing developments as the city pushes towards its 50,000-apartment target.