Just when its numbers were booming, and it had become a solid source of foreign currency for the regime, the COVID-19 pandemic brought the Democratic People’s Republic of Korea’s (DPRK) growing tourism industry to a halt on January 21, 2020 as the country closed its borders to the world. This might have caused the biggest-ever shock to the sector, which the Kim dynasty has assiduously developed over the last four decades, causing a loss of roughly $175 million and forcing the regime to resort to illicit activities to make up for the losses.

The DPRK’s Tourism Industry in Context

Under Kim Il Sung, North Korea began developing the tourism sector in the 1980s, when it established the DPRK National Tourism Administration (NTA) and joined the United Nations World Tourism Organization (UNWTO).[1] Later, coinciding with the administration of progressive President Kim Dae-jung in South Korea, Kim Jong Il opened Mt. Kumgang to South Korean visitors. It became a flagship project, seeing the arrival of almost two million South Korean tourists between 1998 and 2008.[2] Additionally, in 2001, North Korea established formal ties with Spain and sent a diplomatic mission to Madrid, where the UNWTO is headquartered, to further engage with the organization and learn from its partners.[3]

In 2013, two years after succeeding his father, Kim Jong Un declared a new policy of byungjin, which advocated for the parallel development of the country’s economy and nuclear weapons program. In that spirit, the regime once again sought to boost inbound tourism, this time with a well-developed strategy. Investment in infrastructure is one of its main pillars, as the last decade has seen the opening of the Masikryong Ski Resort and hotel complex and the Yangdok Hot Spring Cultural Recreation Center, as well as the rapid development the Wonsan-Kalma Coastal Tourist Zone (Area), although that project remains unfinished.[4]

Training tourism professionals is another area of focus, which the regime aims to do at the Pyongyang Tourism College, inaugurated in 2014.[5] In addition, North Korean diplomats continuously engage with the UNWTO and are at the forefront of the regime’s efforts to attract an increasing number of tourists, mainly from China but also from the West.[6] For that purpose, besides the more typical tours to national landmarks like Panmunjom, Kaesong or Nampho (Nampo), North Korea has begun to offer unorthodox activities such as participation in the Pyongyang Marathon or surfing tours.[7] It has even recently started investing in medical tourism, having inaugurated the Treatment Tourism Exchange Corporation in 2019 to oversee health clinics in its tourism facilities.[8]

The timing of these developments is not arbitrary. First, tourism is one of the few sectors left untouched—for now—by the UN sanctions regime. Second, Pyongyang wants to capitalize on the boom in tourism to East Asia, which has seen an exponential increase in the number of inbound tourists over the last several years.[9] North Korea now has a unique opportunity to consolidate tourism as a dependable and stable source of foreign currency, a commodity that is widely in demand but the regime struggles to obtain due to the sanctions restricting its exports.[10] The move also supports North Korea’s goal to reduce its economic dependence on China, which has so far hampered the accomplishment of the Juche aspiration of self-reliance.[11]

The push given by Kim Jong Un to the tourism industry in North Korea since 2013 has caused its income to rise significantly. In the absence of official statistics, it is only possible to assess this growth with the use of estimates published by specialized institutions and media sources; and, while their reliability is probably far from absolute, they are one of the few instruments available to understand the extent to which North Korea’s tourism strategy is working. An analysis of those data suggests that tourism revenues increased approximately 400 percent between 2014 and 2019, meaning the industry had indeed become a solid source of revenue and foreign currency for the regime up until the country closed its borders to international travelers in January 2020.

The Bank of Korea (BOK) also publishes annual estimates of the growth of North Korea’s gross domestic product (GDP), analyzing each part of the country’s economy, including the services sector, which encompasses the tourism industry.[14] Thus, it is possible to assess the increase of income generated by tourism between 2014 and 2017 by pairing it with the growth of the services sector during those years. Taking the 2017 revenue figure of $44 million from inbound tourism as a baseline and using the annual percentage growth of the services sector provided by the BOK, it is possible to trace back that figure until 2014. The results can be seen in the table below.

Table 1. Estimated Income from Tourism Based on the Annual Growth of the DPRK’s Services Sector[15]

Those figures are consistent with the data reported by KMI for the year 2014, as the figure of $43.2 million falls within the range of $30.6 million and $43.6 million. This suggests a small but steady growth of tourism revenues during the early years of Kim Jong Un’s reign.

In 2018, the North Korean tourism authorities reported a record-high of 200,000 foreign visitors who entered the country that year.[16] There are, however, no figures on the income those visitors generated for the regime; but data provided by NK News indicated at least 350,000 Chinese tourists visited the country in 2019, generating as much as $175 million in earnings from tourism that year.[17] The figure seems credible, reflecting the North Korean government’s decision in 2019 to impose a limit of 1,000 Chinese tourist entries per day (hence 365,000 per year). This suggests that either their number was already close to or had surpassed that threshold, and that each tourist generated a revenue of approximately $500 per trip, on average, for the regime.[18] The websites of several Chinese travel agencies and their offers confirm the credibility of that figure.[19]

If each Chinese tourist spent roughly $500 per trip, this suggests a slight increase in individual tourist expenses in North Korea since 2014, when each of the 100,000 visitors would have had to spend an average of around $430 to reach the estimated income of $43,200,000 of that year. While the exact number of visitors is not available for 2015-2017, if the total amount of visitors to North Korea grew commensurate with the overall growth of the sector as a whole, then even 200,000 visitors in 2018 at an average of $500 per trip means North Korea would have earned close to $100 million from tourism that year. With these data, the following table offers a fuller picture of the evolution of the tourism sector between 2014 and 2019: 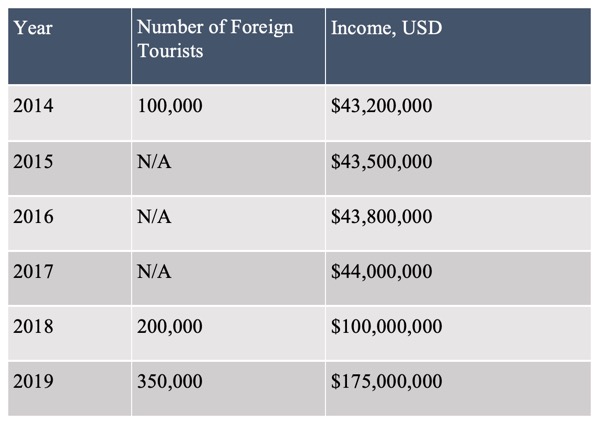 To be clear, the data portrayed are rough but not definitive estimates generated from the little information that has made it to the public. However, the sudden increase in income in 2018 is consistent with the developments of that year, when Kim Jong Un participated in a series of international summits with then-US President Donald Trump, South Korean President Moon Jae-in, and Chinese President Xi Jinping, marking an unprecedented diplomatic opening of the country. This coincided with China lifting in 2018 two temporary bans it had previously imposed on tourism to North Korea, dramatically increasing tourist numbers. The international engagement persisted in 2019, as Kim Jong Un continued to engage with foreign leaders—he met again with Trump in Hanoi in February and visited Russian President Vladimir Putin in Vladivostok in April—and the Chinese government instructed its tourism agencies to increase the number of visitors to North Korea.[21] As a result, income from tourism continued to grow in 2019, peaking at approximately $175 million.[22]

This experience suggests that the regime’s plan to earn growing sums of money from tourism has so far been fruitful with one important caveat: The industry is too dependent on Kim Jong Un’s international image and especially on the Chinese government’s willingness to promote tourism to North Korea, which contradicts the North’s objective to be more independent of its neighbor. Hence, it will be in North Korea’s interest to target tourists from other nations to consolidate these numbers in the long term.

Following a steady growth of tourism revenue since 2014 and having seemingly reached its maximum capacity to host tourists—especially from China—the North Korean regime could reasonably expect that 2020 would be another profitable year for tourism. But then the pandemic struck, and on January 21, North Korea closed its borders and halted all travel to prevent the spread of COVID-19, and has not announced plans to open again. Based on the trends of the number of Chinese tourists per year, it is reasonable to suggest that under normal conditions, the country would have received 350,000 Chinese tourists (and roughly 5,000 non-Chinese visitors), providing the North Korean government with a similar income last year as it made in 2019. Hence, it is relatively safe to assume that in 2020 the regime was prevented from bringing in at least $175 million, slightly under one percent of its GDP.

This might not seem like a very significant amount. But it is around the same income the regime generated in 2017 from illicit exports to circumvent sanctions, and just slightly less than what North Korean workers earned in Russia, China and elsewhere in 2019. And those activities and the income that they generate are important for the survival of the regime.

The halt to tourism has administered a shock to the North Korean economy. After years of developing infrastructure, it will now take longer than expected for the country to reach the return on investment on those projects, and the regime will most likely have trouble paying salaries of professionals in the tourism sector; in 2020, they received virtually no earnings from their jobs and thus might be facing unemployment, which appears to have risen last year.[23]

Unless the UN decides to extend the scope of its sanctions regime to include tourism on the list of forbidden activities, tourism will most likely rebound once the pandemic is controlled internationally and North Korea can reopen its borders to the outside world. This will probably be no earlier than in mid- or late-2022, given the country’s poor health care system and because it has not yet announced plans to begin inoculating its population.

Under an optimistic scenario, North Korea’s tourism industry could be fully operative again by 2023 and reach the level of tourism it saw in 2019. This assumes, of course, that either China keeps encouraging its nationals to visit the country or that North Korea manages to attract a much higher number of tourists from other states. Until then, North Korea can be expected to make up for its losses by trying to increase illicit activities like the export of sanctioned commodities, arms trafficking and cybertheft to continue financing itself, as a recent UN Panel of Experts Report suggested.