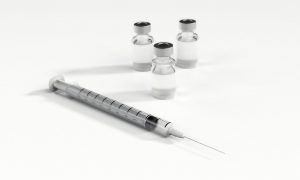 Although the Democratic People’s Republic of Korea (DPRK) appears to have succeeded in preventing the coronavirus (SARS-CoV-2 virus) from entering its borders, the drastic isolation measures have hurt its economy and taken a toll on the vulnerable population. As the pandemic shows no sign of abating, the country will need to explore a path to reopening while minimizing the risk to its people. Vaccines, while not a panacea, are indispensable to any strategy for reopening. However, questions have been raised about the country’s ability to maintain the cold temperatures required for storage and transport and implement a national vaccination program. We analyze the DPRK’s history with vaccines which shows that, with the proper preparations, it could carry out swift, nationwide campaigns. We also describe a theoretical vaccination road map using a combination of the AstraZeneca/Oxford and the mRNA (Moderna or the Pfizer-BioNTech) vaccines.

History of Vaccinations in the DPRK

Vaccinations in North Korea started in 1946. According to the DPRK Ministry of Public Health (MoPH), the first vaccine manufacturing plant was founded in February 1946; subsequently, another two plants were also established. Ten different kinds of vaccines were produced, including Bacillus Calmette-Guerin (BCG), diphtheria, tetanus and pertussis (DTP), oral polio vaccine (OPV), and Japanese encephalitis (JE). Due to the economic crisis and natural disasters of the mid-1990s, vaccine production capacity deteriorated.

The National Immunization Program (EPI) was launched in 1980, supported by the United Nations Children’s Fund (UNICEF) and the World Health Organization (WHO), and is managed by the Central Hygiene and Anti-Epidemic Institute and the Hygiene and Anti-Epidemic Station (AEHS) at the provincial and the county levels. Most vaccines are now procured through UNICEF. Gavi, the Vaccine Alliance, began to support EPI vaccination distributions in 2002. In accordance with the UNICEF/WHO 2019 Joint Reporting Format (JRF), the DPRK government is paying for 15 percent of the vaccines’ cost and 30 percent of the routine immunization program cost.

How Effective Is the DPRK’s Immunization Program?

The long-term partnership between the DPRK MoPH, UNICEF and the WHO, with support from Gavi, has delivered remarkable results. Figure 1 below shows the percentage coverage rates for DPT3 (a childhood vaccine) from 1980 onwards. Prior to the mid-1990s, the country reported high but unverified coverage rates; the entire health system suffered during the mid-1990s due to the famine and the collapse of Soviet assistance, resulting in a decrease in vaccine coverage. The coverage rates soon recovered, however, and North Korea has maintained >90 percent coverage rates for over the past decade.

How Accurate Is the Reported Data on Immunization Rates?

In December 2004, a joint mission by the Liverpool Associates in Tropical Health and the Euro Health Group conducted a Data Quality Audit (DQA) on behalf of Gavi. One objective of the audit was to measure the “accuracy of reporting,” using its standard methods, including random visits to four counties and 24 health facilities. The Provisional Verification Factor was reported as 0.93—well exceeding the threshold for acceptable accuracy of 0.80.

The immunisation reporting system in DPRK is well designed, was functional and information was easily retrievable at all levels. There was a high degree of completeness of reporting, documents were stored properly and staff were in general aware of the reporting procedures for immunisations, vaccines, syringes and AEFI.

At least for the immunization reports, the data appear accurate.

Cold Chain Capabilities in the DPRK

UNICEF and WHO have been supporting the EPI program, including the cold chain equipment and supplies, by providing transportation, refrigerators, freezers, cold boxes, iceboxes and thermometers to the provincial and county levels.

A continuous supply of electricity is required to ensure an uninterrupted cold chain. Solar refrigerators were proposed in 2003, with funding support from European Civil Protection and Humanitarian Aid Operations (ECHO), to overcome the intermittent availability of electricity in certain areas in the DPRK. A pilot project to provide 50 solar refrigerators to 50 county hygiene and anti-epidemic stations was completed in 2004 (Figures 5 and 6).

UNICEF Copenhagen conducts regular reviews to assess the condition of the cold chain. The review in 2008 included inspections of refrigerators, freezers and transportation assets and inventorying of cold chain equipment and accessories. Usually, such reviews and accounting of inventories are used to identify the gaps and replenish and maintain the integrity of the cold chain.

The DPRK’s Cold Chain and the COVID-19 Vaccines

The DPRK’s national cold chain infrastructure is capable of supporting the country-wide deployment of vaccines that require standard refrigeration between 2-8 degrees Celsius (C, e.g., the AstraZeneca/Oxford vaccine). Some equipment may need repair or replacing, but the enhancements are expected to be minor.

The DPRK can also deploy mRNA vaccines, which require ultra-cold temperatures (minus 70 C for Pfizer and minus 20 C for the Moderna vaccines), if the initial deployment is limited geographically, for example, to Pyongyang. If deep freezers are not available, UNICEF, given its familiarity with North Korea’s cold chain infrastructure, could quickly procure and install enough ultra-cold temperature freezers to store a limited quantity of vaccines. Another option for both the Pfizer and Moderna vaccines is storing them in refrigerators (2-8 degrees Celsius) for up to 30 days; if the deployment can be completed within that time period, the ultra-cold freezers may not even be needed.

How Fast Can the DPRK Deploy Vaccines?

During the winter of 2006-2007, four people died due to a measles outbreak in the DPRK, the first in over a decade. Over 3,600 people and one out of every seven counties were affected by February of 2007, when the North Korean government asked for help from UNICEF and the WHO.

The campaign was carried out in two phases. In phase 1, from March 14-18, 2007, six million people were vaccinated for a daily average of 1.2 million vaccinations; in phase 2, from April 9-11 of that year, 10 million people were vaccinated, or a daily average of 3.3 million. The cost of the nationwide campaign was estimated at $8.5 million; the government of North Korea covered $2.5 million (30 percent) of the total cost. As of 2018, measles is considered eradicated in the DPRK.

The DPRK is highly capable of implementing national vaccination programs. Their measles vaccine campaign in 2007 showed how quickly and efficiently they can get the job done. Provided they had time to prepare, i.e., ensure the integrity of the cold chain and have sufficient stock of consumables, the North Koreans could, in theory, vaccinate the entire population of 25 million people in less than 10 days for single injection vaccines, and in under two months for two-shot vaccines. These projections are based on ideal conditions, and the real-world experience would likely be much different.

The DPRK has a well-organized national immunization program and has collaborated with UNICEF, WHO and Gavi to achieve remarkable coverage rates. The government co-finances up to 30 percent of the total costs of the program. When needed, the MoPH can administer up to 3.3 million vaccine injections per day. The country should be able to deploy the AstraZeneca vaccine nationwide with the existing infrastructure and minimal cold chain enhancements; it could also deploy the Pfizer or Moderna vaccines if the coverage area is limited.