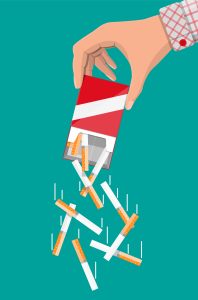 Since joining the United Nations (UN) in 1991, the Democratic People’s Republic of Korea (DPRK), also known as North Korea, has joined the international community to promote various health-related initiatives. For many of these initiatives, North Korea works with the World Health Organization (WHO). In this article, we describe how North Korea has followed through with the mandates of the Framework Convention on Tobacco Control (FCTC) and explore its implications for future participation in multilateral health agreements and the potential for cooperation in the health sector with external partners.

What is the FCTC?

The WHO’s Framework Convention on Tobacco Control was first introduced in 2003. The goal of this convention was to reduce the global prevalence of tobacco use through an evidence-based approach. The signatory countries are required to submit reports on a biannual basis. These reports include data on the prevalence of tobacco use and also contain information about the country’s progress in implementing domestic tobacco control policies. As one of the 168 signatory countries of the WHO FCTC, North Korea has reported data in 2012, 2014, 2018 and 2020.

What Are the Mandates for the Member States Who Signed Onto the Convention?

Article 5 of the FCTC includes the General Obligations of the Convention. These obligations involve implementing tobacco control strategies, establishing a tobacco control unit, reducing interference by the tobacco industry, providing public access to information on tobacco companies and instilling protections for public health policies. On the FCTC’s website, reports are available for each obligation. Our analysis shows that North Korea has fulfilled 69 percent of its FCTC mandates. That places North Korea right at the global average for the percentage of mandates fulfilled by all the signatory countries. Other countries at the same level of compliance include Japan, Denmark, Austria, Peru and South Africa. North Korea has outperformed in compliance when compared to countries like Belgium, Kuwait, Ukraine and Slovakia. In contrast, countries like Fiji, Nepal, India, China and the Philippines have fulfilled more of their obligations when compared to North Korea.

Since 2018, North Korea has integrated tobacco control into its national health strategies and has established a tobacco control unit (with a focal point and a national coordinating mechanism). In its 2020 report, the country provided details about how it will protect public health policies, regarding tobacco control, and also documented progress made in these efforts. According to this report:

Despite this progress, North Korea has not met some specific benchmarks. For example, it has incorporated tobacco control into national health strategies, but it has not yet created a comprehensive multi-sectoral approach. In addition, it has not stopped interference by the tobacco industry or provided public access to information about the tobacco industry. Lastly, Pyongyang has not provided details on the use of implementation guidelines; however, 80 percent of the signatory countries did not fulfill this mandate either.

It is important to note that North Korea’s tobacco industry is a state enterprise; therefore, the government has an inherent conflict between the profits made from tobacco and the detrimental public health effects of smoking. Other Southeast Asian countries, such as China, Vietnam, Laos and Thailand, also face this dilemma. In 2019, the Southeast Asia Tobacco Control Alliance published a report highlighting how state-owned tobacco enterprises complicate the implementation of FCTC mandates. In this report, Thailand was commended for its efforts to protect health policies from the influences of its tobacco industry. Its success stemmed from a combination of a committed Ministry of Public Health, which provided vital leadership on policy and law, a dedicated civil society and the effective utilization of mass media (SEATCA, 2019).

What Has North Korea Done to Reduce Public Tobacco Use?

In 1985, North Korea introduced its first policy to reduce the prevalence of smoking within its borders. This policy later became the basis for the country’s first law regulating nationwide tobacco use—the Tobacco Control Law in 2005. Over the years, they have strengthened this law through multiple amendments. In November 2020, North Korea also adopted a new anti-smoking law at the Supreme People’s Assembly. Although the details of the law have not been fully disclosed, it contains more stringent regulations such as listing smoking-free public areas along with stronger enforcement, compared to the previous Tobacco Control Law.

In addition to the aforementioned legislation, North Korea has also addressed tobacco use through public health interventions as well. According to North Korean websites:

How Has the Implementation of the FCTC Reduced Tobacco Smoking in North Korea?

It is worth noting that the Institute for Health Metrics and Evaluation (IHME) data map showed a relatively higher prevalence of daily smoking among males in most of Eastern Asia, Central Asia, Southeastern Asia and Eastern European regions. In some cultures, smoking is still a well-accepted means of socializing. There are even instances where tobacco products are used as currency or gifted as an expression of gratitude. To better understand  the high prevalence of tobacco use among males in North Korea, it may be necessary to study the social, cultural and economic contexts in the country.

Furthermore, the prevalence of smoking in adolescent males, from 13 to 15 years of age, was 1.3 percent in 2020. An interesting observation we wanted to highlight is that all the smokers in North Korea were males; there were zero female smokers reported. This difference in smoking prevalence may be secondary to cultural factors, or they may reflect gender inequalities within the society. Regardless, the lower (and non-existent) smoking rates among adolescents and females, respectively, can still be chalked up as a positive public health outcome, as the harmful effects of smoking are more pronounced in children and women (Bonnie et al., 2015).

A common misperception is that North Korea is unwilling to collaborate with the international community. However, the country has demonstrated a willingness to sign onto agreements when it comes to protecting the health of its people. As we mentioned earlier, the 2020 FCTC report showed that the smoking prevalence among men (aged 15 years and older) has decreased since implementation of the FCTC began, yet the prevalence remains relatively high. Despite the modest results, the self-assessment and international reporting, as well as compliance with the bulk of the mandates of the FCTC, have demonstrated a high level of commitment and follow-through. This is not an isolated case. In addition to the FCTC, North Korea regularly participates in other health-related initiatives, at least within the WHO and the UN system. Some examples are listed below:

North Korea generally follows through with its responsibilities when signing on to multilateral health agreements such as the WHO FCTC, World Health Assembly resolutions, and Sustainable Development Goals. As a signatory to the WHO FCTC, North Korea has regularly submitted its reports and has implemented various domestic policies to reduce tobacco use. In fact, its percentage of fulfilled FCTC mandates (69 percent) was in line with the average compliance of all signatory countries. As the international community seeks to engage with North Korea in the health sector, aligning with the aims of these international health agreements may help find areas of shared interests and cooperation.