A fabulous military parade was held in Kim Il Sung Square in central Pyongyang during the late morning of February 8 (NKST Thursday) to mark the 70 anniversary of the foundation of the Korean People’s Army [KPA].  The event was not aired live on Korean Central Television [KCTV] and attendance was relatively restricted, in contrast to demonstrations of recent years.

Kim Jong Un [Kim Cho’ng-u’n] and Ri Sol Ju [Ri So’l-chu] arrived at the back entrance of the parade review stand and where Jong Un conducted a review of the honor guard and led senior officials onto the platform.  Upon arriving onto the review platform, the gathered crowd chanted Jong Un’s name and also shouted “devoted defense.” 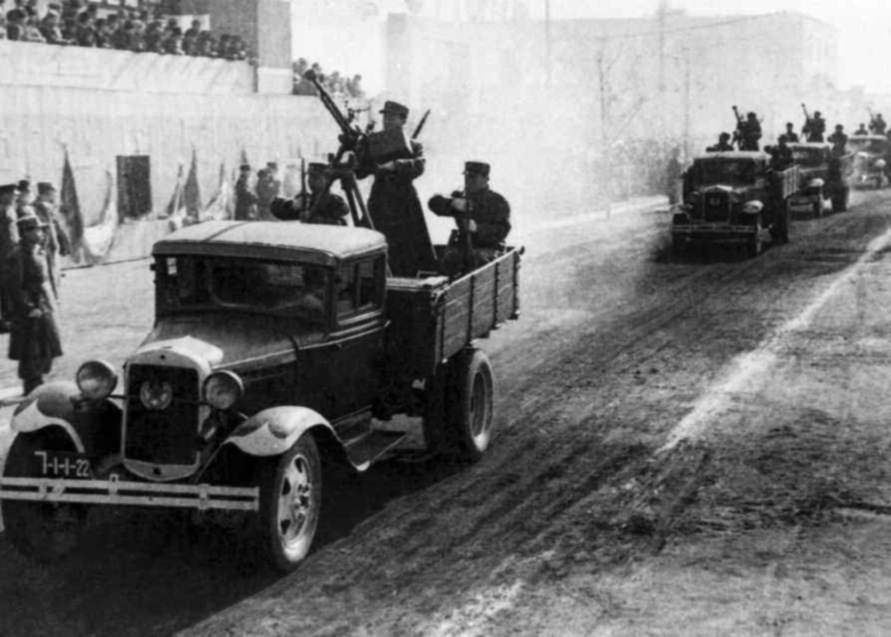 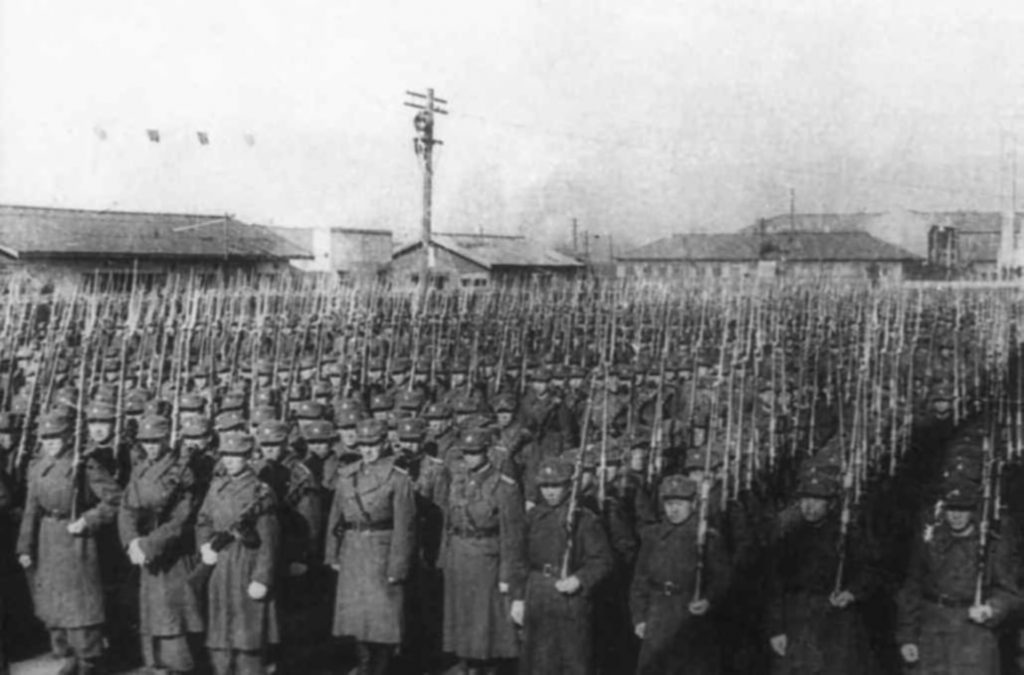 Seated in the VIP section in front of the review platform were cadres, functionaries and officials of the WPK, DPRK Government, Cabinet Ministries and Commissions, national institutions, officers and service personnel of the KPA and Korean People’s Internal Security Forces [KPISF], faculty and students of the Mangyo’ngdae Revolutionary School and Kang Pan Sok Revolutionary School, managers and functionaries industrial production units and various Pyongyangites who’ve received state awards and titles.  Also in attendance were foreign diplomats and defense attaches, along with their spouses, and other foreign nationals.

The honor guard and combined KPA military band began the parade’s opening ceremony, after which the DPRK and WPK flags were raised.  Minister of the People’s Armed Forced Gen. Pak Yong Sik and the parade director rode around central Pyongyang on jeeps (in lieu of Mercedes Benz limousines) to review the participating units and congratulate them on the 70th anniversary of the KPA’s foundation.  Gen. Pak then rode back in front of the parade review platform and reported to Kim Jong Un that all participating units were present and accounted for and the parade would begin.  A trumpeter ceremoniously played a tune that the parade would begin and 21-gun salute responded.

The KPA is the revolutionary army which inherited the traditions of the anti-Japanese struggle with the indomitable revolutionary spirit, rich fighting experience and superb tactics of the KPRA.

Thanks to the foundation of the Chuch’e-based regular army, the DPRK has proudly emerged the most dignified people’s country with its own strong military guarantee from the first days of its birth and it could defeat the imperialist aggression forces boasting of being “the strongest” in the world and achieve the great victory in the Fatherland Liberation War (Korean War).

It is the pride of our Party and state and great fortune of our people to have a majestic and powerful revolutionary army, the people’s army.

The KPA needs to hold high the banner of modeling the whole army on Kimilsungism-Kimjongilism and carry through the strategic line and tasks for bolstering up the military strength set forth by the Party and thus have perfect combat efficiency as befits the revolutionary army.

The People’s Army should remain intensely loyal to the leadership of the Workers’ Party of Korea (WPK).

It should be the first death-defying corps and the first lifeguards defending the Central Committee of the WPK with arms, entrusting its destiny to the WPK.

Under the present situation in which the US and its vassal forces make a fuss around the Korean Peninsula, the People’s Army should keep high alert and step up combat preparations.

And thus it should restrain the aggressors from violating or making a mockery of the dignity and sovereignty of our inviolable country even 0.001 mm.

The People’s Army should establish blade-like military discipline and more thoroughly take on the appearance as befits the regular army.

It should do things, big and small, for the sake of the people and regard devoting true feelings to them with utmost sincerity as its revolutionary army spirit.

As long as there exists imperialism on the earth and the US pursues its hostile policy toward the DPRK, the mission of the People’s Army, a powerful treasured sword for the protection of the country and people and peace, can never be changed.  Only final victory is in store for the WPK and the people that take a grip on arms of revolution.

The DPRK will be powerful and prosperous forever as long as there is the KPA boundlessly faithful to the leadership of the WPK.

After Jong Un’s speech, a motorcade with flags bearing the official portraits of Kim Il Sung and Kim Jong Il (Kim Cho’ng-il) rolled through under the escort of KPA generals and officer.  The KPA honor guard and parade participants “paid high tribute.”  The parade began with columns of KPA personnel dressed in historic attire from the period during the KPA’s foundation.  It was followed by the parade director and columns of the KPA’s three service branches, its corps units, logistics personnel, rear services and medical officers all marching past in fine array.

Jet fighters flew in a formation of the numeral 70 to mark the anniversary and blasted off fireworks.  This was followed by tanks, BTRs, Howitzer-type artillery, multiple-launch rocket systems, other mechanized pieces and units and a variety of ballistic missiles  The end of the parade was marked with additional jet fighters leaving a trail in the shape of a five color fan “to specially decorate the end of the parade.” 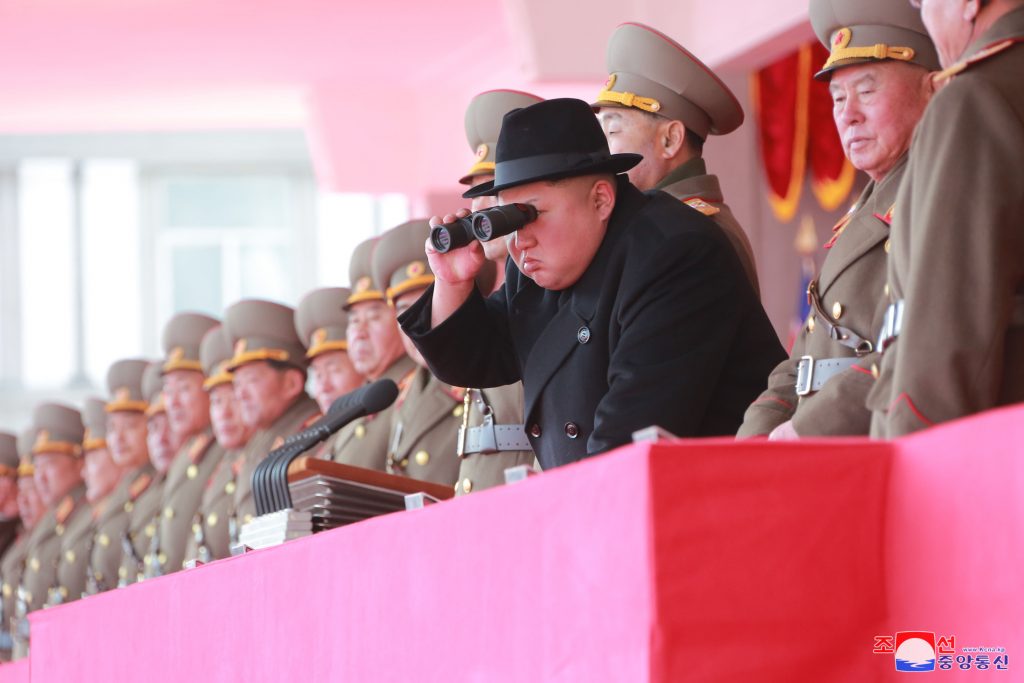 The parade ended with thunderous applause which “reverberated far and wide.” More fireworks blasted off.  Iridescent balloons were untethered and floated over KIS Square.  Kim Jong Un, Ri Sol Ju, Kim Yong Nam (who doffed his cap), Pak Pong Ju and Choe Ryong Hae stepped forth onto the platform’s balcony.  Jong Un waved to the crowd, walking along platform.  He stopped to speak briefly with the parade’s sole guest who served with Kim Il Sung in the 88th Sniper Brigade, the 100-year old former Second Economy Commission Chairman Ri Chol Man.  Jong Un returned to the center of the platform and removed his hat in respect to the crowd and participants.  According to KCNA, the “military parade celebrating the 70the anniversary of the KPA demonstrated the faith and will of the Korean army and people to further consolidate the DPRK as invincible fortress of socialism and bring earlier the final victory of the Chuch’e revolution.”