Ju Kyu Chang (Chu Kyu-chang), one of the top officials involved in the research and development of the DPRK’s WMDs and conventional weapons, died at the age of 89 in Pyongyang at 2030 on September 3 (Monday) from pancytopenia.  At the time of his demise, he was semi-retired and was serving as an adviser of the Workers’ Party of Korea [WPK] Central Committee.  Dr. Ju was a leading contributor to the DPRK’s successful development of its nuclear weapons, theater ballistic missiles and space program.  He had a significant patronage network among the scientists, researchers and technical experts involved in the country’s strategic and conventional weapons programs.

An obituary was issued in Rodong Sinmun by theWPK Central Committee and Supreme People’s Assembly Presidium.  The obituary said that Dr Ju “worked energetically to establish the monolithic leadership of Kim Jong Un [Kim Cho’ng-u’n],” “played an important role in the defense industry sector” and worked to “develop the independent defense industry into a new, higher stage.”  It also said that Ju Kyu Chang was a man “loved by comrades and the people as a dignified servant with a devoted spirit of service and revolutionary principles for the country and people.”  It also said that Ju was a “revolutionary soldier faithful to President Kim Il Sung (Kim Il-so’ng) and Chairman Kim Jong Il (Kim Cho’ng-il), a close revolutionary comrade-in-arms of Supreme Leader Kim Jong Un and an elder revolutionary who made distinguished contribution to the strengthening of the country’s defence capabilities.”  It added that “although he passed away, his exploits for the Party, the revolution, the country and the people will long remain.”

He served in the Korean People’s Army [KPA] Air and Anti-Air Forces during the entirety of the Fatherland Liberation (Korean) War.  Ju began his formal career as an aeronautical engineer during the late 1950s working under the present-day Ministry of Machine Building Industry and held a concurrent position as a leading cadre under the WPK Munitions Industry Department.  He was elected an alternate (candidate) member of the WPK Central Committee during the 5th Party Congress in 1970.

Ju was a key figure in the organizational restructuring of the research and manufacturing base of the DPRK’s munitions industry.  Ju was appointed a member of the Second Economy Commission [Second Economic Committee] after it was established around 1971 and became Vice Chairman of the commission in 1974 .  He also served concurrently as a department director and Vice President in the Second Academy of Natural Sciences (also known as the National Defense Academy).  He eventually rose to the position of SANS President and concurrently deputy director of the WPK Munitions Industry Department.

In 1983 Ju Kyu Chang was appointed Vice Minister of Machine-Building Industry.  He was upgraded to full membership on the WPK Central Committee in 1988.  He headed a Party delegation on a visit to the PRC in 1989.  In 1991 Ju was concurrently Chairman of the Second Economy Commission and President of SANS.  Throughout the 1980s and 1990s Ju supervised the R & D on the Hwasong and Rodong missiles and led the research team that developed that Taepodong missile.

Ju was elected a deputy to the 10th Supreme People’s Assembly [SPA] in 1998 and held his SPA position at the time of his death.  In March 2001, he was appointed WPK Munitions Industry Department Senior Deputy Director, replacing Pak Song Bong who passed away in February 2001.  Ju Kyu Chang made his first appearance with late DPRK leader Kim Jong Il in this position on April 11, 2001.  From 2001 until 2011, Ju was a regular member of KJI’s entourage during his field inspections and on-the-spot-guidance tours, however his presence was not always explicitly reported by KCNA or KCBS. 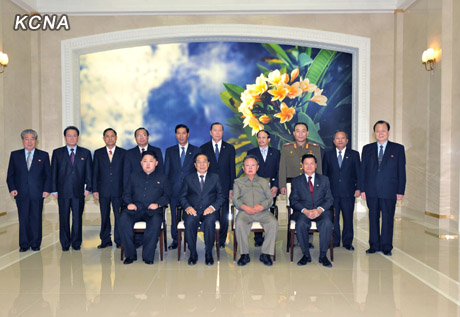 Following the death of Kim Jong Il in 2011, Ju Kyu Chang continued working as senior MID official.  He was elevated to the rank of 4-star KPA General (taejang) and was one of the leading officials involved in the DPRK’s space launches in 2012 and the country’s third nuclear test in 2013.  Ju took semi-retired status in mid-2014 and became an alternate (candidate) member of the WPK Central Committee during the 7th Party Congress.  He continued to make appearances at central report meetings, Ku’msusan visits and other state events.

Ju Kyu Chang was born in Hamju County, South Hamgyo’ng Province in 1928.  He lived in South Hamgyo’ng for almost two decades and was proud of his roots there.  He did his undergraduate, graduate and post-graduate coursework at Kim Ch’aek University of Science and Technology.  Ju was quiet and scholarly, and had a calm and pleasant personality.