A meeting of the Korean Workers’ Party [KWP] Political Bureau was held on 28 February (Friday).  Attending the meeting were members and alternate (candidate) members of the Political Bureau, along with senior cadres of the KWP Central Committee and other state and security organizations.  Kim Jong Un (Kim Cho’ng-u’n) presided over the meeting.

The primary purpose of the meeting was to reveal, discuss and take punitive measures to address a major corruption and abuse of power scandal in the KWP Organization Guidance Department [OGD] network of institutions and school which train KWP cadres.  According to KCNA, “acts alien to the Party, abuse of power, practices of privileges, indulgence in bureaucracy, corruption and irregularities revealed among senior officials of the Party Central Committee and officials of the Party cadre training institution.”  These acts “were harshly criticized” and “their gravity and consequences were sharply analyzed.”

Kim Jong Un “clarified the analysis of the issues by the Party Central Committee and its stand on them, and dealt strong blows at the acts alien to the party and unpopular and anti-socialist acts brought up for discussion at the meetings.”  KJU “called on all the Party officials and organizations to draw a serious lesson from the recent incident, to make steady efforts to revolutionize themselves and their units and bring about a new turn in Party work.”

As a result of this scandal, the Political Bureau dismissed Ri Man Gon (Ri Man-ko’n), KWP Vice Chairman and (now) immediate past OGD Director and Pak Thae Dok (Pak T’ae-dok), KWP Vice Chairman for Agriculture.  The Political Bureau has also decommissioned the KWP committee for Cadres’ Affairs Training “which was involved in the practices of corruption and irregularities” and also imposed a “relevant penalty.”

The Political Bureau also discussed “in depth the principles issues of thoroughly applying the people-first principle in party building and activities as required by the developing revolution, constantly strengthening the Party ranks and its fighting efficiency, ways of correctly executing the immediate political, military and economic tasks, and adopting and strictly enforcing top-class anti-epidemic measures to contain the viral epidemic spreading rapidly across the world.”

The Political Bureau discussed “issues of taking nationwide top-class anti-epidemic steps in a more thorough-going way and strictly putting them into practice in order to cope with the viral epidemic spreading rapidly around the world.”

Kim Jong Un remarked that “in case the infectious disease spreading beyond control finds its way into our country, it will entail serious consequences” and he noted that “the strong measures taken by our Party and the government from the beginning have been the surest and highly reliable, preemptive and decisive preventative measures as this viral infection spreads so rapidly, its incubation period is uncertain and its contagion route is scientifically uncertain.”

KJU said that “an urgent task at present is to supplement and complement the law on the state emergency anti-epidemic and to readjust state crisis control regulations in an orderly way” and he emphasized the Presidium of the Supreme People’s Assembly, the Cabinet and other related institutions must further strengthen the state anti-epidemic force immediately and push ahead with the work for supplementing and complementing anti-epidemic means, systems and laws based on the experiences gained through the ongoing enforcement of preemptive and powerful anti-epidemic measures to cope with infectious disease.”

The Political Bureau meeting “discussed measures to deter the influx and spread of the infectious disease in a scientific, preemptive and lockdown way.”  Kim Jong Un said that “no special cases must be allowed with the state anti-epidemic system” and stress was placed upon “the need to set up a strict discipline by which all the fields and units of the country unconditionally obey to the command and control of the Central Headquarters for the emergency anti-epidemic work and thoroughly execute instructions from it and to further tighten the system of reporting to the Party and legal surveillance.”

KJU instructed “the Cabinet and the Central Emergency Anti-epidemic Headquarters to seal off all the channels and space through which the infectious disease may find its way, and strengthen check-ups, tests and quarantines under the work system and order already in place.”  The Political Bureau “stressed the issue of tightening economic organizations and anti-epidemic work under the prevailing situation and conditions so as to accomplish this year’s goals without fail and to thoroughly ensure the life and security of the people.” 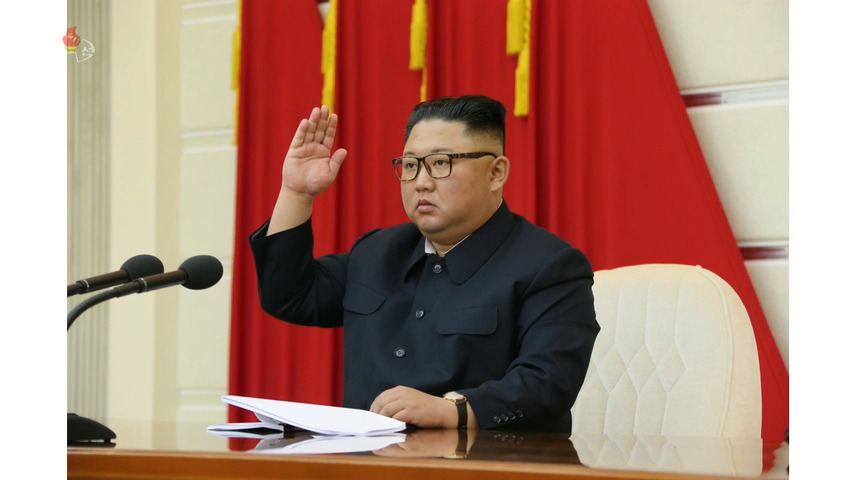 He said that “it is important for the Party organizations at all levels to have a clear understanding of the intention of the Party Central Committee and put it into practice” and KJU urged “the need for the Party to provide an impetus so that the Cabinet and the economic institutions at all levels could provide proper economic operation and command under the present situation.  The anti-epidemic measures being taken by us is a crucial state affair for the defense of the people and a heavy responsibility of the Party Central Committee, not just the prevention of the disease.”  He also “underlined the need for all to thoroughly carry out the decisions and instructions of the Party Central Committee and direct all-out efforts to the security of the country and the life and safety of the people.” 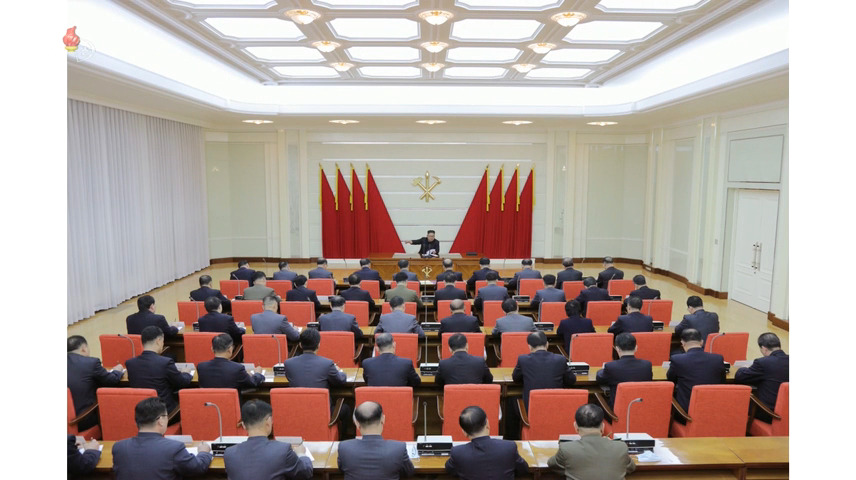 The Political Bureau discussed “the measures for pushing forward the construction of dwelling houses in Pyongyang and in provinces as required by the Party’s policy on construction which prioritizes the conveniences in the people’s living.”