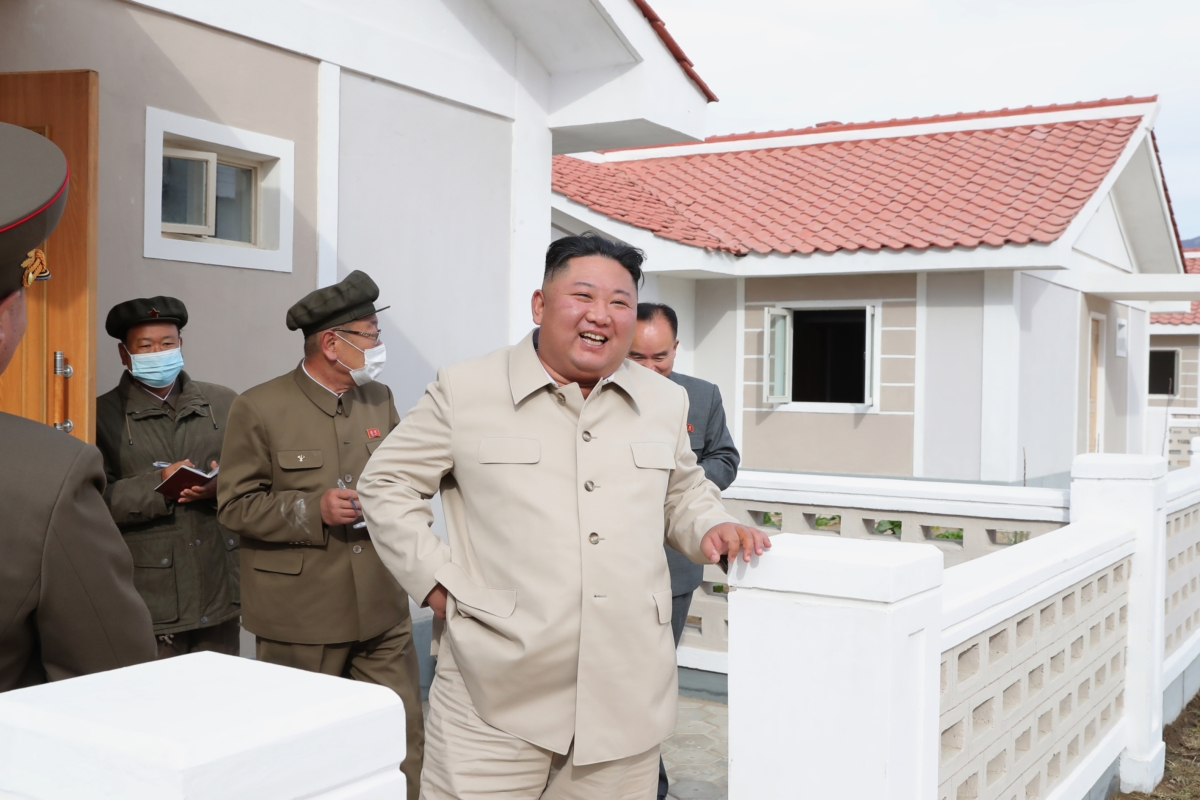 KJU began his visit exchanging greetings with Pyongyang-based core Party members from Division #1 who have been tasked to assist in storm recovery work including KWP Vice Chairman Choe Hwi (Ch’oe Hwi), KWP Propaganda and Agitation Senior Deputy Director Ri Yong Sik (Ri Yo’ng-sik), Pyongyang City KWP Committee Vice Chairman for Organizational Affairs Sim In Song (Sim In-so’ng), along with KPA commanders participating in construction work.  He remarked that the “division members and service personnel involved in the reconstruction campaign were always in his heart during the celebration marking the founding anniversary of the glorious Party, and added that he missed them and he had visited them to give them encouragement.”

The Suryo’ng called on the “Party members from the capital city of Pyongyang, the core focus our Party puts its greatest trust in, to immediately go to calamity-afflicted areas in North and South Hamgyo’ng provinces and to help them remove the after effects as soon as possible.”  According to state me the division member “arrived in the disaster-stricken areas repairing the section of road extending scores of kilometers and built 147 modern dweeling houses in Unp’o, Kyo’ngp’o workers’ districts in Hongwo’n County and Haksade-ri, Riwo’n County of South Hamgyo’ng Provinces in 12-29 September period within 18 days since the start of the reconstruction project.  Thus, they carried our their duties before the October holiday.  Then they went to the most severely devastated areas, the areas which are left behind in the reconstruction, and are pushing forward with the all-out reconstruction campaign to achieve greater successes.”

He remarked that the “Party spirit, the spirit of serving the people and the revolutionary spirit of the core Party members from the capital city were verified this time…their intense loyalty and struggle and zeal are prevailing all over the reconstruction sites and encouraging all the builders to perform new feats and innovations and serve as a driving force for the acceleration of the reconstruction project” and said that “by involving the core Party members of the capital city in the reconstruction of local areas, we could give proper understanding as to what the Party members should do and what the duty and role of a Party member should be when the country is in difficulties.  This contributed to establishing a good socialist national trait of the whole country sharing and overcoming ordeals together.”

KJU said that “although the project was great and the conditions were unfavorable, proud successes were achieved thanks to their devoted efforts.  The proud achievements showed that if Party members turn out with firm faith, they can display the tremendous strength and no ordeal would be insurmountable in the world.  It is good to see collectivism fully displayed, a beautiful trait of helping and leading one another forward and learning with an open mind amid the fierce hot wind of the socialist emulation during the construction, adding a hot wind of competition including the campaign in which one overtakes and learns from others and swaps building experiences with them should raised fiercely in all the campaign sites for the recovery from natural disasters to let all units make innovations.”

Kim Jong Un stressed “the need to provide the Party member fighters with clothes for winter, necessities, materials and supplies in a responsible manner and take good measures for treatment and prevention, now that the weather is cold” and he “appreciated that service personnel of the People’s Army have raised fierce flames of performing the feats in the campaign sites for recovery from disasters in South Hamgyo’ng Province to build new dwelling houses embodying the plan of our Party and desire and requirement of the people like mushrooms after rain and made miraculous successes.”  He said that it “is a miracle that can be worked by only our army, creator of the people’s happiness and pioneer of a new civilization, that the service personnel have registered a series of brilliant successes in finishing the building of dwelling houses qualitatively in time while making unsparing devotion with the same sincerity with which they would make when they build their own houses and villages, after correctly understanding that architecture is like a visual aid material of ideology and culture in which the height of the ideology and civilization of the times is intuitively reflected as noted by the Party.”

The Sury’ong called for “steadily setting a new example and model in the direction of preserving the characteristics of specific zones in local construction in the future, too” and he “emphasized that the designing agencies assume a very important mission in materializing our Party’s grandiose plan for local construction” and he “particularly stressed that it is one important issue that should be prioritized to enhance the responsibility and role of the field of construction supervision.”

He stated that according to a report “there occurred wicked and shameless violations of laws of construction in which construction is done in a random way in an easy-going way in violation of the requirements of the design and construction method by some units in Kangwo’n Province and North and South Hamgyo’ng Provinces” and he said “this issue will be strictly dealt with.”  KJU issued an instruction for “officials to study and introduce the way of paving roads in the residential districts with an earth-hardening agents.”  He also stressed “the need to plant lots of fruit trees around every dwelling house and carry out the work of creating forests in the surrounding mountains on a long-term basis.” 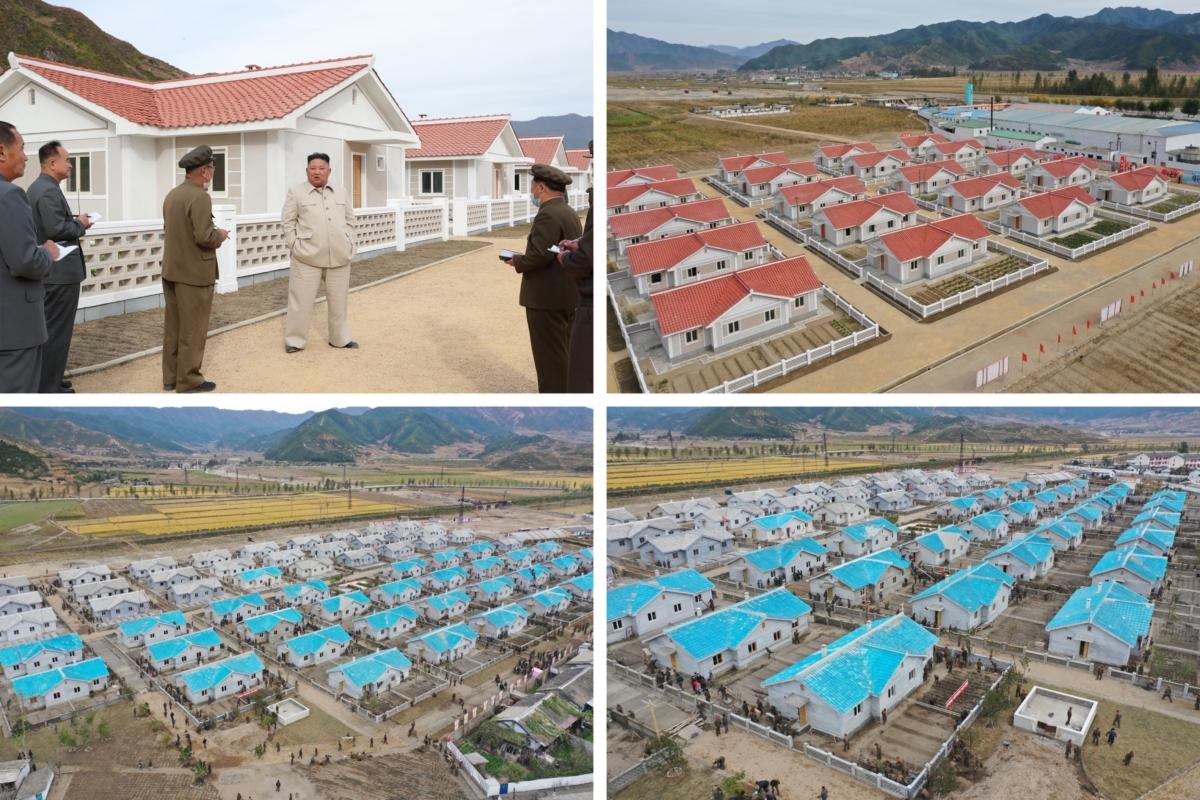 He called on the “divisions of the Party members from the capital city to conduct a new creation drive with high awareness and enthusiasm in the areas to which they had been moved with the tasks given by the Party” and he “extended militant greetings to all the members of the division of Party members from the capital city once again.”  Kim Jong Un said that “watching the construction of the dwelling houses, the people in the afflicted areas waiting day by day with great expectation and hope would be really pleased, ardently appealing to all to make redoubled and strenuous efforts to bring earlier the day of completion when new cradle of happy life would be provided to our people.”