When KJU arrived the DPRK and Chinese national anthems were played.  Floral baskets from Kim Jong Un, the Party Central Committee, the CMC, the State Affairs Commission, the SPA Presidium, the DPRK Cabinet and the KPA were laid before the CPV monument while solemn music played by musicians of the KPA honor guard.

Kim Jong Un “paid silent tribute in memory of the CPV martyrs.”  He then visited the gravestone of Mao Anying, the son of Chairman Mao Zedong killed in action during the Korean War.  A floral basket sent in KJU’s name was placed before the grave with a decorative ribbon reading “To Martyr Mao Anying!”  The Suryo’ng “paid tribute” to May Anying.”

Along with the other DPRK leadership visitors, Kim Jong Un walked around the cemetery and viewed the memorials.  He remarked “with deep emotion that even though 70 years have passed since the excellent sons and daughters of the fraternal Chinese people made an entry into the sacred Fatherland Liberation War fought by the Korean people, the immortal exploits and heroic feats made by the CPV by sacrificially supporting us under the banner of resisting America and aiding Korea, safeguarding the home and defending the motherland despite the very difficult situation remain vividly in the memory of our people.”

Kim Jong Un said that the “entry of the CPV into the Korean front was a historic contribution to the great victory in the Fatherland Liberation War” and noted that “the great victory won by the armies and peoples of the DPRK and Chine while linking their destiny as one and sharing weal and woe with each other is, indeed, of great significance no matter how much water flows under the bridge.”

The Suryo’ng said that “every part of our country is closely associated with the red blood shed by the service personnel of the Chinese People’s Volunteers who bravely fought in the sacred war against the imperialist aggressors, not being afraid of death and dedicating their invaluable youth and lives to it.”  Kim Jong Un stressed that “our Party, government and people would never forget their noble sole and lofty self-sacrificing spirit forever.” 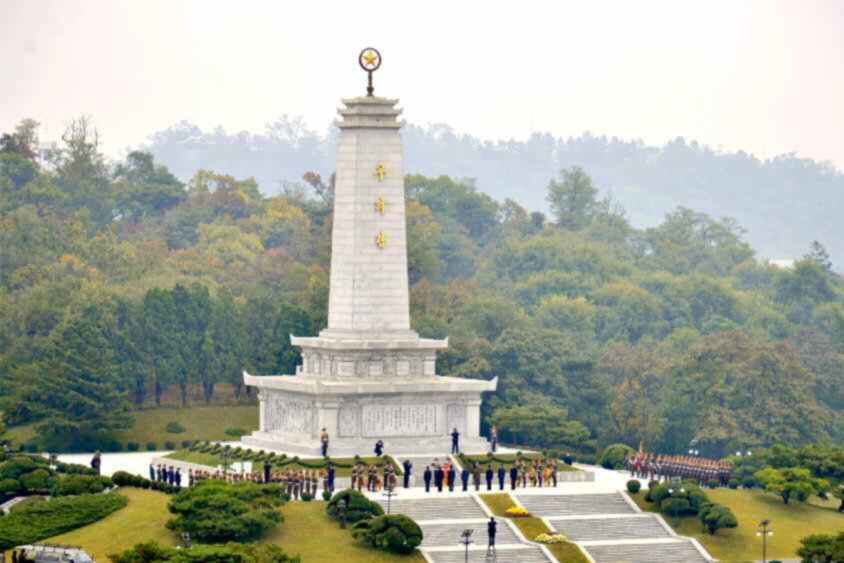 During a separate event on 21 October (Wednesday), Kim Jong Un had a floral basket delivered to the Friendship Tower in Pyongyang.

The DPRK leadership attending the event “paid a silent tribute to the martyrs of the Chinese People’s Volunteers, who became true role models in displaying noble internationalism and fraternal friendship by dedicating their invaluable lives” and then walked around and viewed the Friendship Tower.