This information has already been published in RFA (in Korean), so here is the English version:

Pictured below is the Sci-Tech Complex in Pyongyang: 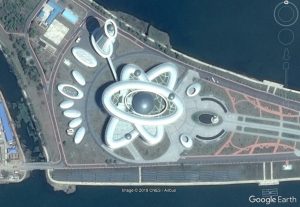 It is one of the most iconic buildings of the Kim Jong-un era. On the inside, it is an educational facility for science and technology, the development of which is a cornerstone of economic policy under Kim Jong-un. On the outside, the building (designed to look like a beryllium atom [four electrons]) is a showcase piece for the new style of design and architecture characteristic of the Kim Jong-un era.

In true North Korean style, which aims to establish equality across each province, it is possible that new “Sci-Tech Libraries” (과학기술도서관), based on the model complex in Pyongyang, are being constructed in each of North Korea’s provinces. I have to say “probably” because I am only aware of one new Sci-Tech Library in Hamhung, and I cannot say the plan is to build them across the country until I see them in other provinces.

According to Google Earth imagery (see below), the South Hamgyong Sci-Tech Library was built on the site of the former South Hamgyong Cultural Exhibition House sometime between 2016-2-26 (Top) and 2016-11-30 (Bottom). 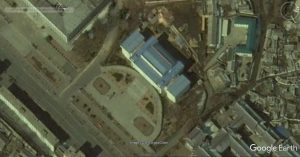 Here are before and after ground-level photos: 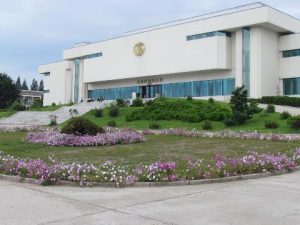 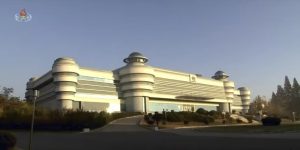 The new building appears to be a mixture of architectural styles seen in Ryomyong  and Mirae Scientists Street. It contains two features resembling stylized hydrogen atoms, or planets with rings, on the roof. There is also a statue of a helium atom (two electrons) in front of the building. 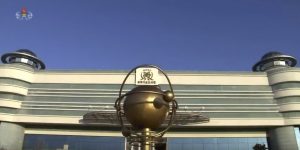 The completion of this facility was not announced in the official media as far as I am aware, so this slipped by me until I stumbled on a broadcast image of a library card that featured the new building.

It is possible that this is a unique facility and that it will not be replicated in other parts of the country. Hamhung has a number of specialized research and production facilities (including the largest branch of the State Academy of Science outside of Pyongyang), and this could be a facility meant to nurture the particular industries of the area. However, it could also be the first Sci-Tech Library at the provincial level, and more are on the way. We will have to wait and see.

North Korea has been regularly featuring provincial-level “Sci-Tech Exhibitions” in the official media. The Pyongyang exhibitions are held in the Sci-Tech Complex, so perhaps the provincial exhibitions will be held in Sci-Tech Libraries such as these in the future.

North Korea was already in the process of updating local libraries (도서관) into “Miraewon” (미래원–roughly translated as “Future Complexes”). I am unsure if this will continue, or if new libraries will be re-branded as “Sci-Tech Libraries”…