Planet Labs uploaded some high-resolution imagery of the Kalma Peninsula from 2018-3-25 (you can see a sample of the imagery in my tweet here). With it, we can begin to assess the progress of the construction of the Kalma Coastal Tourist Area. I overlaid this imagery onto Google Earth and traced out the buildings under construction. This allowed me to make a reasonably accurate map of the completed tourist area: 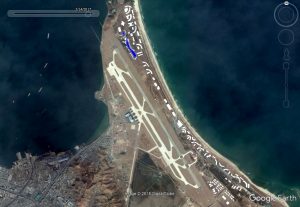 I have only conducted superficial measures (this is only a blog post after all), but it appears the Kalma Coastal Tourist Area is the most ambitious construction project launched yet in the Kim Jong-un era (in terms of size and number of buildings). There are well over 100 facilities under construction on the beach, stretched over a four-kilometer-long construction site (the Ryomyong Project site was just over two kilometers long by comparison).

Some of the inputs for this project can be domestically sourced, particularly labor (conscripted soldiers), steel, and concrete. Other amenities like flat screen TVs (component parts), electrical equipment (solar panels), computers, sports equipment, transportation equipment will have to be imported at a time when constraints on North Korea’s ability to conduct foreign trade are most acute.

Pictured below (KCTV): Soldier working on the Kalma construction site: 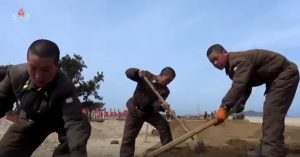 Another item of concern to me is that the North Koreans are literally building houses on sand, and for this kind of work, you need to install a strong foundation before the actual building can be erected. KCTV footage of the construction site (broadcast the same day as the Planet image was taken) reveals that they don’t appear to be doing this: 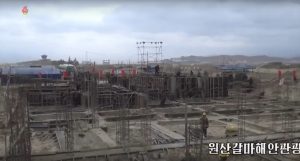 Completing this project within one year (the rumored construction time) would be a monumental feat. It is possible that, as with Mirae Scientist Street (and maybe others), the buildings will be “completed” on the outside, but only one or two will be completed on the inside (the ones Kim Jong-un will visit). The rest will remain uncompleted on the inside for the unknown period of time it takes for them to be finished. Mirae Scientist Street still has unoccupied buildings, and it is possible Ryomyong does as well.