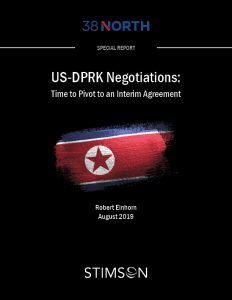 If and when US-DPRK working-level talks resume, as agreed by US President Donald Trump and Chairman Kim Jong Un at their brief June 30 meeting at the Demilitarized Zone, prospects for overcoming the current impasse will depend heavily on whether the Trump administration is now prepared to recognize that the North is unwilling, at least at the present time, to give up its nuclear weapons—and whether, as a result, the administration is now prepared to consider an agreement that imposes significant constraints on DPRK capabilities but falls short of requiring complete denuclearization in an agreed time frame.

To be sure, such an agreement is not the ideal outcome that the US government and all other interested governments would like to see. However, a less ambitious agreement should be compared not with the ideal but unattainable goal of complete, time-bound elimination but with its most likely alternative—a US strategy of pressure, containment and ultimately regime change.


Download "US-DPRK Negotiations: Time to Pivot to an Interim Agreement" by Robert Einhorn