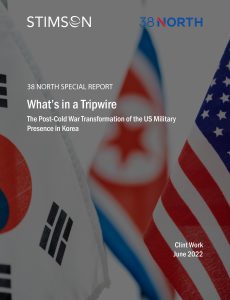 From the moment US troops first arrived on the Korean Peninsula, US policymakers have sought to reduce the US military presence and pass the defense burden back to the Republic of Korea (ROK, or South Korea). Yet, in each instance when a US president attempted to reduce, realign or withdraw these US forces, the policy has been delayed, truncated or canceled, followed by promises to keep force levels constant at arbitrary top-line levels. Successive US presidents have been unable to militarily disengage from the Korean Peninsula due to apprehension about undermining deterrence against a growing North Korean threat and, more importantly, broader US strategic imperatives. Over the years, the fitful evolution of the US force presence has driven contradictory policy dynamics within the US-ROK alliance.

These contradictions have become more acute following the end of the Cold War. Within a democratic South Korea, alliance management has become more challenging, being intertwined with highly politicized debates about ROK dependence versus autonomy, with lingering uncertainty about US staying power, and often complaints about US heavy-handedness. Moreover, South Korea’s economic and defense modernization, alongside the gradual reduction and realignment of US forces, has resulted in a division of labor of sorts, with Seoul taking on the lion’s share of responsibility for conventional deterrence and defense on the Korean Peninsula and the US providing extended deterrence for South Korea against North Korea’s growing nuclear capabilities.

However, North Korea’s advancements in long-range missile and nuclear weapon capabilities—specifically its potential ability to strike the continental United States with a nuclear-armed intercontinental ballistic missile (ICBM)—raises pressing questions about whether Washington would risk Seattle to save Seoul. The more responsibility Seoul takes on, the greater scrutiny is directed on Washington’s extended deterrence commitment.

In recent years, US and ROK officials have reframed the relationship as a comprehensive strategic alliance, which nests its traditional military and security components in an expansive array of shared democratic values, economic ties and mutual support for a rules-based international order. However, such discourse also papers over very real differences at the core of the alliance. The proliferation of consultative mechanisms over the last decade, which were meant, in part, to address these differences, have not adequately done so. Instead, North Korea’s steady nuclear and missile advancements and burgeoning great power competition between the United States and China and Russia pose new challenges to alliance cohesion. While the US and ROK continue to reiterate the “ironclad” nature of relations, South Korea has expressed growing doubts about the credibility of US extended deterrence and increasing support for building its own nuclear deterrent.

Moving forward, alliance managers must honestly address these differences. The United States should upgrade the relationship with South Korea to the level of other alliances in the region, give it more consistent bandwidth—not only when crisis requires it—and provide greater clarity within alliance consultative mechanisms about the US nuclear umbrella. Washington should also continue to encourage Seoul to expand its role in the region and improve ties with Tokyo but also show sensitivity toward Seoul’s unique geopolitical vulnerability and perspective. South Korea, while rightly seeking reassurance and clarity and a greater voice in the implementation of the US extended deterrence commitment, should also better understand the limits of such consultations, including the US president’s sole authority in authorizing the use of nuclear weapons. South Korea should strive to take more of a lead in the alliance while accepting it will never achieve full autonomy or self-reliance as long as the alliance exists, and US forces are stationed on the peninsula.


Download "What’s in a Tripwire: The Post-Cold War Transformation of the US Military Presence in Korea," by Clint Work