Christopher! My white knight in shining armor! What have you done, my champion of reason? For years I have admired you from afar, engaged in battles against irrationality and iniquity! Tell me you haven’t abandoned your quest! Tell me you haven’t succumbed to the notion that reason and compassion have no place in geopolitics!

I’m old enough to know better, but there’s a hidden region of my brain (right next to the amygdala) where I still maintain a private pantheon of heroes and role models. That’s where my image of Christopher resided. Until recently, that is. It’s very painful when one of my idols falls off their pedestal.

If only it were as easy to distinguish good from evil in real life as it is in vintage Wild West movies, where the good guys wear white hats and the bad guys wear black. Alas, reality wears camouflage. Black can turn out to be good; white can turn out to be evil. Like brilliant white snow in a spring thaw, Christopher’s image has turned a slushy shade of gray.

Though I have never met him, my admiration for Christopher Robert Hill dates back to his role in the Dayton Accords. This agreement was the beginning of the end of the conflict that tore apart my birth-country, Yugoslavia. I cheered when George W. Bush (with a strong nudge from Condoleezza Rice) appointed Hill as chief U.S. negotiator in the Six Party Talks in 2005. And although he was constantly badgered and undermined by hawks in the Bush administration, Hill pushed the North Koreans farther down the road of denuclearization than anyone had managed to do since the Agreed Framework of 1994.

You don’t get far in negotiations unless you have an open mind, unless you are able to think yourself into your opponent’s mind, unless you understand what they need from you in order for them to be able to give to you what you need from them. It’s an exercise in extracting clarity from ambiguity. Except that ambiguity—especially in inter-cultural and inter-ideological relations—is the bedrock of reality, and clarity, in all its beauty, is always ephemeral.

My ideal Christopher knew that. He certainly knew how to convey ambiguous clarity in the many press conferences he held over his 33 years in the Foreign Service. There was a certain magic in the way he led journalists to believe he was disclosing insider information about the Six Party Talks, whereas he was really using them to soften up American perceptions in order to extract concessions from his political bosses in Washington that were necessary to overcome obstacles in the Six Party process, all while trying to avoid the impression that he was negotiating via the media—something he knew from his Bosnia days could derail any progress made.

I thought he might teach these tricks of the trade to his students when he took up his current job as Dean of the Korbel School of International Studies at the University of Denver. I thought he might use his two-year experience as a young Peace Corps volunteer in Cameroon to teach them how perception is influenced by prior experience, how easy it is to confuse right and wrong.

There was the incident in January when he told an audience at Stanford University’s Center for Security and Cooperation that there is “absolutely no value” in restarting Six Party Talks, because “the North Koreans lied to the United States.” [i]

And if that wasn’t enough of a disappointment, I found a Chris Hill article on Al Jazeera, in which he speculates about whether South Korea should use starvation as a weapon to bring down the North Korean regime.[ii] This is usually the sort of discussion you hear over a bottle of soju among the lunatic fringe of armchair human rights enthusiasts. You know, from the same corner as the “let’s nuke the daylights out of them” school of thought.

I don’t deny that mistaking wrong for right has never been so easy. Witness the conflict that has broken out between two other favorite white-hat heroes of mine: the human rights and the humanitarian communities.

“The North Korean people are suffering,” say humanitarians. “Children are malnourished because agriculture lacks fertilizer, machinery, and know-how. Parents are unemployed because industry lacks energy, technology, and raw materials. The country is in dire need of development assistance.”

“The North Korean people are suffering,” say human rights activists. “Children are malnourished because an uncaring government squanders resources on the military instead of feeding its people. Parents are unemployed because they cannot participate in decisions that affect their lives, not to speak of the draconian punishments that await dissenters. The country is in dire need of regime change.”

Both are right, of course, and their disagreements usually remain at the level of academic discussion. Human rights advocates continue their work of naming and shaming; humanitarians continue to deliver assistance to those in need. Both use their respective information advantage to sway donors toward the rightness of their cause. 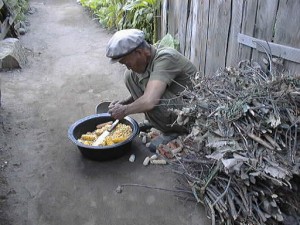 Unfortunately, a theoretical question can quickly turn into a question of life and death during a time of crisis. Last November, the UN Food and Agriculture Organization warned that North Korea’s food shortages will be more severe this spring than they have been in years.[iii] After an in-country assessment in February, five American aid agencies corroborated a dire need of food.[iv]

But will donors respond? North Korea’s nuclear weapons program and military aggressiveness have soured the international community’s generosity. The largest donors of food during the “great famine” of the 1990s (United States and South Korea) have withdrawn aid and imposed draconian sanctions this past year. So has Canada, another major food donor. Donors detest ambiguity, and readily gravitate toward those who can provide clarity—a commodity that is in short supply when it comes to the DPRK. If we deliver food, will it go to those who are most in need, or will it be diverted to the military, or siphoned off by the elite, or stockpiled for use during celebrations of the 100th anniversary of Great Leader Kim Il Sung’s birth in 2012? Considering that the world’s food reserves are at a low point and food prices at a high point, donors are susceptible to any rationale that will help them strike a country or region off their long list of global emergencies.

“To feed or not to feed?” is a real question, and a reasonable question at that. Those who have been most closely involved in humanitarian assistance to North Korea have long insisted that food aid is not the answer. Fertilizer deliveries produce far more food at a far cheaper price than food deliveries. Modernizing North Korean agriculture with appropriate technology, information sharing and capacity building would be better yet. But that is out of the question, not only because of sanctions, but also because of the accepted wisdom that such assistance would help to stabilize the Kim Jong Il regime, and therefore prolong the North Korean people’s suffering.

“Would food aid help to ensure the survival of a state whose treatment of its own citizens is among the most abysmal in the world?” asks Chris Hill. He goes on to speculate whether “denying food aid would result in a famine that the North Korean regime could not withstand.”

He doesn’t answer his own question. He just commiserates with the government of South Korea, whose responsibility it will be to make this “Sophie’s choice.” The rest of us, presumably, should wait and follow South Korea’s example.

“In the coming weeks,” writes Hill, “South Korea’s government will confront one of the toughest choices that any government can face: whether the short-term cost in human lives is worth the potential long-term benefits—also in terms of human lives—that a famine-induced collapse of North Korea could bring.”

On reading these words, my Christopher idol came crashing to the ground. We’ve been through this before. I spent almost 3 years helping to stem the scourge of famine in North Korea. The first to die are the wretched of the earth: the outcasts in the most remote countryside, the prisoners in labor camps, the families that depend on a depleted distribution system, the elderly, the women and children of insufficient songun, even the youngest soldiers of the lowest ranks. The ones who manage to survive are the Pyongyang elite, the ranking military officers, the Workers’ Party bosses, the black market operators, the snitches, the thieves, the cheaters, and the murderers.

And from the likes of these you expect the miracle of regime change, Christopher?

Never mind the reality that a mere decade ago the DPRK regime already survived the last great famine of the 20th century. The fact that a respected, knowledgeable advocate of good in the face of evil would lend credibility to such an abominable juxtaposition of immoral alternatives shows me that we have lost our ethical compass. A “famine-induced” collapse? Whatever happened to “a hungry child knows no politics?” Did my virtuous knight allow himself to be tricked by a devil’s bargain?

Christopher! Don’t abandon your legacy to the jackals that have always snapped at your heels. Stand up and tell the world that despite your inability to tame the rabid dragon with your own hands, the positives of negotiation and compassion outweigh the negatives. It is better to talk than to fight. It is better to offer assistance than to crush the outstretched hand.

[Erich Weingartner is Editor-in-Chief of CanKor.ca]