“How to Talk to a North Korean,” was originally posted on foreignpolicy.com on April 20, 2011. The original article can be found here. 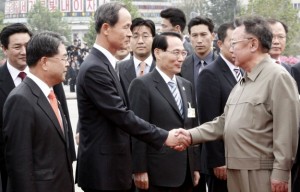 Last week, China’s nuclear envoy Wu Dawei proposed after a meeting with his North Korean counterpart that the two Koreas hold dialogue as a first step to reopening the six-party talks, the nuclear negotiations that have been stalled for two years. The Chinese proposal may or may not succeed. But until official talks resume, figuring out what Pyongyang is thinking must be done through deciphering messages in its state-controlled media or through unofficial contacts, such as former U.S. President Jimmy Carter’s upcoming visit to Pyongyang. When left to experienced hands, both can yield insights. When practiced by inexperienced observers, they can do more damage than good.

I have been meeting with North Koreans for almost 20 years. As head of the State Department’s section charged with implementing the 1994 Agreed Framework, I held discussions with the North Korean Foreign Ministry, scientists, bureaucrats in charge of North Korea’s nuclear program, military officers, intelligence officials, and others. Those talks were often difficult but could be productive.

One of my first destinations in North Korea was the Yongbyon nuclear facility, where, as a result of the 1994 agreement, American workers were helping the North Koreans store spent fuel rods containing five nuclear bombs worth of plutonium. It struck me as funny — but not surprising, given my own bureaucratic experiences — that my Foreign Ministry minders were not allowed to enter the facility, while I, an American government official, was welcomed to one of the most sensitive installations in North Korea.

I met with the chief engineer, who launched into a long, angry lecture about the United States. As he talked, I fantasized about ripping into him and his country. But I didn’t. When he finished venting, I didn’t respond to his remarks, other than blandly telling him I would convey his message to my superiors (which I never did), before moving on to the business at hand. The session turned out to be productive.

Now that I am no longer in government, talking to the North Koreans is even more challenging. I have to operate in unofficial “Track II” settings where they are likely to be seriously constrained. After all, why reveal anything to people who essentially don’t count? It is easier to stick to oft-recited, well-worn talking points.

Moreover, there is always the danger that these sessions can become permeated by what I call the “panda bear in the zoo” syndrome. Just as Americans flocked to the National Zoo to see the two Chinese panda bears after normalization of relations with Beijing, some Western groups flock to Track II meetings with North Koreans for the same reason, not for serious give-and-take.

Don’t get me wrong. Some organizations have interesting discussions with the North Koreans. That’s because they understand there are important guidelines to follow. For example, just meeting any North Korean, while difficult to arrange, is not a great accomplishment. Meeting influential individuals is. Talking seriously about denuclearization means not only holding sessions with Foreign Ministry officials who handle U.S.-North Korean relations, but also knowing who is up and who is down in Pyongyang. Titles are often meaningless.

Your agenda also has to be structured to produce results. That doesn’t mean avoiding difficult issues. But the North Koreans know how to deal with a frontal assault. If you cast your meeting as a clash of civilizations or ideologies, then be prepared for emphatic boilerplate recitations of maximalist positions. Taking it down a notch and focusing on pragmatic steps forward can produce a very different result, a lesson I learned in my discussion with the chief engineer at Yongbyon and in countless other encounters.

Consider the recent Aspen Institute meeting with the North Koreans in Germany. I only mention it because one participant published an account of the session in the Washington Post last week. I didn’t attend. Following a trip to Pyongyang in November 2010, where a small delegation including myself met with senior North Korean officials, I organized a separate meeting in Germany just before the Aspen group’s conclave. Compared with the Washington Post account, the contrast is striking.

In the Aspen meeting, the North Koreans reportedly staked out standard tough positions on denuclearization that have been well-known for the past few years (such as: They aren’t going to give up their nukes until the whole peninsula is denuclearized and the U.S. nuclear umbrella protecting Seoul is removed). The public description of the meeting leaves the reader with a one-dimensional impression of the North Koreans as inflexible.

In contrast, while our meetings in Pyongyang and Berlin included the usual rote recitations, the North Koreans did show a willingness to explore pragmatic solutions. Everything from denuclearization (even when it came to their highly enriched uranium program) to nuclear nonproliferation to the safety of their fledging reactor program was fair game.

Indeed, in November Pyongyang told us it was willing to ship out of the country 12,000 fresh fuel rods that could be used to produce up to eight nuclear bombs worth of plutonium. The North Koreans wanted financial compensation, but that is standard international practice, not extortion. New Mexico Gov. Bill Richardson, a favored interlocutor of the North Koreans, revealed that offer publicly a month later after his visit to Pyongyang. It fell short of total denuclearization but still would have resulted in an irreversible first step in that direction. The offer probably would not have been made at all without Track II efforts.

One might argue that the North Koreans just use outsiders for their own purposes. That happens. The visit of a Stanford University delegation to Pyongyang’s newly minted uranium enrichment facility in November triggered an international uproar since that was the first time any foreigners saw the facility. But the Stanford group did everyone an important service by telling the world what it saw and by eliciting important information from the North Koreans on its nuclear efforts.

Granted, the North Koreans use Track II encounters to break bad news, but they also use them to send important private messages that the participants — mostly trained diplomats, scientists, and experts with both extensive international experience and practice in dealing with North Koreans — can relay home. In the meetings I attended, the North Koreans were authoritative officials, clearly able to speak for their government and willing to lift the official veil to give us a passing peek at their thinking.

Finally, our meetings were private and confidential. That allows the North Koreans to speak more freely and openly about what is on their minds. In contrast to the Aspen meeting in Germany, none of us have written articles in major newspapers about our talks and there have been almost no public leaks of the substance.

It would, of course, be infinitely preferable for governments to conduct their own discussions. But at a time when they aren’t talking, unofficial channels of communication run by seasoned practitioners can be indispensible. Otherwise, be prepared for yet another visit to the panda bears at the National Zoo.