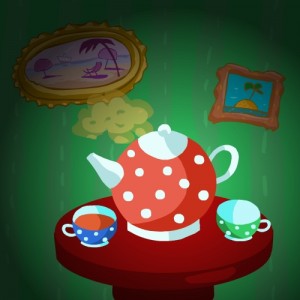 When Inspector O walked across the bridge into Tumen, it was raining hard. I was waiting in one of the cheap trinket stores, the one nearest the end of the bridge, as we’d agreed in our brief phone conversation the week before. There were no other customers in the place, but he’d told me to stand near the shelf of ashtrays in the shape of T42 tanks. I knew he’d complain if instead I was lounging by the tee shirts when he showed up.

“You want to buy?” the saleslady inquired. “Take the whole squad, I can give you a discount.”

“Nah, no one wants tanks anymore. That no fly zone screwed everything.  I may have to junk the whole shelf. The lady next door, though, she bought a big box of Mirages, you know, with cigarette holders on each wing. Can you believe it? She must work for CIA or something. Can’t trust nobody these days.”

O walked in, gave the saleslady a look, and watched as she retreated to the counter. He took off his jacket, which was dripping wet. “Can anyone get some tea around here?” O gave the saleslady another look. She said something under her breath and slunk out the door to the next store.

“Long time,” I said when the coast was clear. “I was sure you had been taken completely out of circulation, as in permanently. Where you been?”

“Me? What about you? I’ve been nowhere special the whole time, but you don’t write, you don’t call.”

“Really? Busy? From the way I hear it, you’ve been the opposite of busy.”

“What is it your people say? Patient, you’re being patient. Patience is a policy? How about napping? Does that count?”

“How about not getting into a discussion about who is more asleep at the switch these days. “

“I have a question from a few important people.” He pointed a finger upwards. “They want to know something.”

“That’s why you got me up to this one-horse town?”

“No, this is different. “One-horse town” means a small, crummy, unimportant place.”

“Sort of. What’s the question?”

“We don’t have to carry them. That’s a misperception.”

“But you need to show them when a security person asks? Before you take off your clothes at the airport?”

“We don’t take off our clothes. And we don’t carry our birth certificates.  It’s just someone wanted to know where the President was born, that’s all.”

“Crazy. He was born in a log cabin, right? Same with us. What difference does it make?”

“Just a technicality. Ours was born in Hawaii. Yours?”

“Hawaii? Of course! Was that before or after you stole the place from the natives?”

“Listen, Hawaii is a state; it became one in 1950-something. It’s ours fair and square. They gave us the papers, welcomed us with flowers.”

“Yeah, Hawaii, way out in the middle of the ocean. You figure you can declare a place a state whenever you want? No matter where it is?”

“Not really. For one thing, there has to be room on the flag for another star.  And the people there have to want it.”

“But geography isn’t a problem. I mean, if Alaska and Hawaii can do it, ANYPLACE can be a state, is that right?”

I shrugged. “We’ll have to get back to you on that.”

“The good thing about being a state is that you can spend yourself into bankruptcy and no one gives a damn, right?

“Some states do that.”

O lowered his voice so it was barely audible over the sound of the rain on the pavement outside. “Do you have to have been born in a state after it has become one, or can it be before?”

O looked around the store. “I don’t know,” he said. “Be president?”

“Just asking, that’s all.” O wandered over to the key chains in the shape of submarines. “You want one of these?”

“No, thank you.” I hesitated. “Then there’re primaries to think about.”

We fell silent. O reached into an inside pocket in his jacket and took out a very wet piece of paper. When he tried to unfold it, it came apart in a soaking mess.  He looked at it for a long moment, his lips pursed and his brow knit.

The saleslady returned with a teapot. “I got tea, but no cups. Have to use those tanks. Ha. Everybody knows you can’t drink tea from a Mirage.” She filled one tank for each of us, but then O gave her another look so she retreated back to her side of the counter.

“I saw a report that you got a new boss a few weeks ago,” I said to make small talk. “Anything new in the Ministry of People’s Security? New staff director? Offices redecorated? ”

“I can’t say. Listen,” O seemed a little nervous all of a sudden, “good to see you.  Keep in touch.” He placed the T47 back on the shelf, with its barrel oddly askew, put on his jacket, and headed for the exit.

“Your minister, he seems ranked pretty low, don’t you think? Lower than your friend at the Ministry of State Security. What does that mean do you suppose?”

The saleslady laughed and poured herself another T47 of tea. I was talking to myself. O was already out the door. Just then, the rain started coming down furiously. O hurried ahead, but he turned back toward me before stepping onto the bridge.  “

“Your minister,” I yelled back. “I hear he’s a nice fellow.”

I saw him throw something into the river, and then he disappeared, swallowed by the rain which blew in sheets across the bridge.