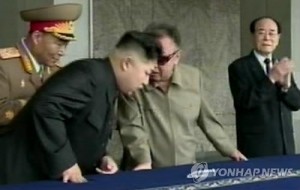 It has always seemed to me there wasn’t much to be gained by nitpicking someone else’s work. Especially when people are writing under pressure and the uncertainties of breaking events, minor differences over details need to be stifled, as Archie Bunker might say. This is one of those times. As of this writing, we are only about 120 hours beyond the announcement of Kim Jong Il’s death. Arguments and opinions are swirling around. Practically everyone who has ever eaten Korean food has been called on by the media to opine.

After the first few days of gaseous moral posturing by newspapers and politicians, some solid analytical pieces have emerged. These do not all agree, and at this point no one knows which among them is right. The key thing is that they each have the advantage of being logical and based on familiarity with North Korea, whether through long study or direct experience.

I’ll single out only one of those articles here—Rudiger Frank’s well written and thoughtful article, “The Party as the Kingmaker: The Death of Kim Jong Il and its Consequences for North Korea.” It has what few other commentators I’ve seen have so far included—crucial references to the history that helped shape North Korea and are no doubt very much on the minds of the those feeling their way along the dark halls of power today. First and foremost are the events of the mid-1950s, when both Moscow and Beijing messed in internal politics in Pyongyang, encouraging “conspirators” in the Korean Workers’ Party to move against Kim Il Sung. (The Soviets are also credited in some quarters with having warned Kim of the plot, which only puts more wheels within wheels.)

History was much on the minds of the North Korean leadership in the mid-1990s, following Kim Il Sung’s death. DPRK media were filled with articles reminding readers that after Stalin’s death, the revolution was “betrayed” by a variety of “scum” who pursued “opportunist” policies, betrayal that was compounded in the 1980s, according to these articles, by those in the Soviet leadership who fatally compromised the revolution by abandoning the ideological underpinnings of the USSR’s political system. Whether this torrent of warnings from Pyongyang was intended to justify purges in the North at the time, or push back someone (unnamed and unknown to the outside) advocating policies that looked to threaten Kim Jong Il’s total control, remains uncertain. At least, I am uncertain and would welcome clarification from anyone who does know. In any case, perhaps we should brace ourselves for a similar onslaught of warnings against “betrayers of the revolution” in the coming months, fully realizing that they won’t necessarily mean what they seem to mean.

But, back to Rudiger Frank. I don’t disagree at all with his line of argument. It is plausible and hangs together. Of course, it is also by necessity somewhat speculative, and so I would merely ask a series of questions on what seem to me some pivotal points in his thesis. I may be wrong, but it seems to me that he bases a good deal of his approach on the notion that the North Korean leadership was unprepared for Kim Jong Il’s death, and that Kim Jong Un was, in effect, left hanging betwixt and between the moving parts of a succession not yet in sync, or at least not yet matured along all points of its slowly expanding perimeter.

Unless Kim Jong Il showed symptoms in the days just before his heart attack on December 17 that alarmed his retinue, it is probably true that the specific date of his death was a surprise and a shock. But does that mean there had been no preparations for such an eventuality? Apparently, Kim had nearly died in July 2008 from a stroke; for some period of time (many days) after his stroke, he was probably incapacitated, maybe incapable of giving orders or even understanding what was going on. Subsequently, his death might have been a taboo subject to discuss, but all in the leadership who were close to the situation knew that it was not an abstraction anymore, and that some plan had to be put in place for the next time.

This would not have been done behind Kim’s back, and certainly not in the face of his opposition. But was he opposed? The succession process of Jong Un, already on track before July 2008, was put into high gear not long afterwards. And although those of us on the outside were kept pretty much in the dark about Kim Jong Un throughout much of 2009, there is good reason to believe that his existence and even his likely status as successor-to-be was not kept a secret from the population. I cannot say that every farmer in every remote county in Jagang Province knew his name, but the party Propaganda and Agitation Department was seemingly already hard a work constructing and disseminating his legend among the general population.

In other words, Kim Jong Un’s emergence at the WPK conference in September 2010 was not a surprise to anyone in North Korea who had been paying attention, and that probably included most of the adult population. Similarly, from the way the media treated the son during the first 11 months of 2011, there could be no doubt that he was approaching a coequal status with Kim Jong Il (I said “approaching”) and was already considered by the elder Kim as his successor. If that is true, then there was likely no shock, no gap, no basis for a whisper of complaint by late in the day on December 17 when upon Kim’s death having been confirmed and reported to at least a select few in the leadership, the Guard Command moved to envelope Kim Jong Un in the protective security cocoon designated for No. 1.

There is undoubtedly beating within the breast of at least one general officer in the Korean People’s Army a vengeful heart. Who that might be we won’t know until: 1) he suddenly disappears or 2) he makes a successful grab for power. Will such a heart also beat in the ranks of the regency group of elders organized to tutor, guide, and nurture Kim Jong Un, helping steer him over and around the swamps on his path to taking full power? That’s a possibility, but more likely the members of this group were selected exactly because there was no question of their loyalty to Kim Jong Il and his plans for the future, most especially the plans for install Kim Jong Un as successor.

Kim Jong Il himself had a regency group of sorts helping him during the early years of his grooming to be successor. By the time he took over in 1994, however, he had his hands firmly on the levers of power, and had no need of senior protectors.

What is interesting about the current situation is that, for the first time in more than 50 years, there is in Pyongyang no single, dominant individual at the top to make the final decisions, to resolve different approaches among advisors, to play individuals against each other to keep the system in rough balance. As Rudiger Frank points out, Kim Jong Un apparently did not get to the point in his own political standing to be able to step into such large shoes convincingly, at least not yet. The regency group, presumably, will have to take on those responsibilities Yet in many respects, no one in North Korea born in the past 60 years has much if any experience operating in such a decision making environment. Under Kim Il Sung, there was at least a functioning party Politburo that was consulted on important matters. Such was not Kim Jong Il’s style, however. He did not want to hear consensus decisions—he wanted to hear what a particular leading official thought, and he called people into his office one at a time to grill them. Maybe party elders like SPA President Kim Yong Nam or Premier Choe Yong Rim, both of whom had extensive experience working at top levels during Kim Il Sung’s reign, will be able to go back to functioning in a somewhat more collegial style, but will they have a dominant role in the inner circle around Kim Jong Un?

Frank’s essay ends with this point: “North Korea, a nuclear state, now stands at a major juncture in its development.” That begs for an honest, longer retrospective look at how we—not the North Koreans, but we—got into this mess. In the middle of a howling storm may be no time to ask whose bright idea it was to buy the 15-for-a-dollar halyards that are now failing. But that we should find ourselves in such a bad position vis à vis the DPRK at this crucial moment is worth self reflection and discussion.