In early June 2011, China and the DPRK announced an agreement to establish a free trade area on Hwanggumpyong and Wihwa Islands, undeveloped sites adjacent to China’s border city of Dandong where a tax-free zone will also be established. These islands are located in the downstream area of the Yalu River on the border between the two countries and are part of North Pyongyang Province. The announcement underlined the North’s increasingly close ties with China; the presence of Jang Song Thaek, Kim Jong Il’s brother-in-law and a senior DPRK official, at the opening ceremonies symbolized direct involvement by the North Korean leader in the project. It also highlighted the likelihood that investment by the Chinese government and companies will drive development of the zone. According to a decree of the Presidium of the Supreme People’s Assembly issued on June 6, 2011, “Hwanggumphyong-ri, Sindo County; Sangdan-ri, Hadan-ri and Taji-ri, Sinuiju City and Soho-ri, Uiju County of North Phyongan Province shall belong to the zone.” It also noted that development of the zone shall “start from the Hwanggumphyong district.”[1] 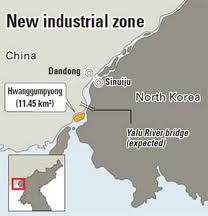 Planning to establish this zone has probably been underway for a year or more. It is worth noting that the ribbon cutting ceremony took place only weeks after Kim Jong Il’s May trip to China, his third visit in 2011. The new zone fits into a surge of development projects, many designed to improve infrastructure in the area, including the construction and upgrading of several bridges along the Yalu and Tumen Rivers, new railway service from China to North Korea (ostensibly for tourism), and large Chinese investments in North Korean mines. All of these developments fit into China’s plans for development of its northeastern provinces and the view held by local officials that fulfilling those plans will not be possible without parallel developments in the North Korean economy. In that context, the Chinese know full well the state of the North Korean side of the border—little existing infrastructure or development—but probably intend to remedy that problem in order to fulfill their economic and political goals.

Pyongyang reportedly proposed to lease the two islands to China in order to build the “Hong Kong of North Korea.” They would become free trade zones in order to reduce trade barriers and bureaucratic requirements between the two countries. Chinese nationals and foreigners would be able to enjoy visa-free status when traveling to the islands. Incentives for investors include: tax refunds, lifting of tariffs on imported equipment and materials used for production, freedom to choose or establish banks for financial services, use of foreign currencies for transactions, direct signing of labor contracts, right to hire and fire employees, right to transfer and inherit profits and assets, right to set prices, and unimpeded cell phone and internet access. These incentives are a significant improvement over current practices relating to Chinese investment in North Korea. The primary disincentive is the poor infrastructure condition on the islands and uncertainty about plans for the financing and management of needed infrastructure. The duration of the lease would be 50 years and could be extended up to 100 years.

The official outline of the joint development project stated that four major industries—information, tourism and culture, modern agriculture, and light manufacturing—would be pursued. In that context, Dai Yulin, secretary of the Dandong Committee of the Communist Party of China announced, “projects in sectors of marine engineering, special steel, colored steel, and car audio will soon settle in Hwanggumpyong Island and Dandong City.” Future construction plans include docks for passenger and freight ships connecting Hwanggumpyong and Shinuiju, a network of roads within the zone and two access roads linking Hwanggumpyong with the Dandong economic zone in China. The new free trade area will be administered jointly by the two countries and include the participation of local governments as well as the establishment of an investment development corporation.

China’s plans to build a large industrial and residential area adjacent to Hwanggumpyong are illustrated in this billboard entitled, “Detailed Regulatory Plan of the Liaoning Harbor Industrial Zone” (figure 2).

Satellite photography graphically illustrates that over the past 5 years, China has made a major investment in the adjacent area, which has been a beehive of activity with new factories, large blocks of multi-story flats, roads, and new infrastructure (figure 3).

Figure 3. Photos of the Dandong industrial suburb of Zhonghecun taken in 2005 and 2010 demonstrate huge Chinese investments.

The Chinese are also in the process of building a major sports complex adjacent to the border with North Korea.

Chinese construction activities appear to have spilled over into North Korean territory on Hwanggumpyong Island (figure 5). The Chinese seem to be using North Korean land as a place to dump their construction waste (e.g. soil). The second, more substantial bridge built since late 2010 would suggest heavy loads and the river inlet has been filled in. They may also intend to use the same area for parking for the stadium and related facilities. On the other hand, there appears to be plenty of land on the Chinese side of the border for that purpose.

Most of Hwanggumpyong remains a small, boggy island located on the west side of the very wide estuary of the Yalu River. It is largely separated by muddy sloughs from the Chinese mainland, although for several kilometers the island is part of the mainland and divided from Chinese territory by a simple security fence and some irrigation ditches. Hwanggumpyong is more a part of China than North Korea, making it a convenient land area for cooperative activities between the two countries without having to cross a wide river (figure 6). Since the island is at the mouth of the historic river, China may see it as having some strategic value as well.

Figure 6. Hwanggumpyong Island with the international border between the DPRK and China shown in yellow. The island is nestled against the Chinese industrial zone of Donggang.

A major Chinese highway parallels the border, often only a few feet from a barbed wire border fence with a large Chinese language billboard and a smaller white fence that is probably North Korean. No roads or even tracks seem to cross the divide. While these pictures of the border purport to be taken from the Chinese side, they cannot be fully authenticated, although the landscape matches satellite imagery.

Figure 7. A stretch of the border where Hwanggumpyong is part of the Chinese mainland.

Figure 8. The landscape of Hwanggumpyong as seen from the Chinese side of the border. The DPRK fence is simple compared to the Chinese barrier in the previous picture.

The island itself is similar to the countryside around Dandong, which not long ago had no industry to speak of. It has one major village—the largest section with 200 dwellings—which is part of a cooperative farm. (Hwanggumpyong is located across the river from a major North Korean showpiece farm.) Some sites appear to have barracks but there are no signs of major military equipment. There is no obvious power source on the island; power poles along the street cannot be discerned from satellite photos. Since supplying electricity to the island would require a two-mile or longer cable under the river, any large power connections will probably have to come from China.

Figure 9. Although little to no change is apparent on Hwanggumpyong Island between 2005 (left) and 2010 (right), there appears to be a build-up on the Chinese side, not far from the border.

Joint press releases describing the new zone mention establishing ports on Hwanggumpyong Island in order to improve marine connections to the North Korean mainland. Since the island is largely surrounded by mud flats, it would seem to be unattractive as a port for deep draft vessels. Sampans can be found on the Chinese side of the slough and barges up to 175 feet long appear in Chinese stretches of the river further north, but Hwanggumpyong only has a small boat dock near the village.

In contrast, China has a large well-constructed, deep-water port at the town of Donggang near the mouth of the river that is better suited for ocean connections than Hwanggumpyong, which is shallow and frozen in winter.

Wihwa Island, located further north and across the Yalu from Dandong city, is also part of the new free trade zone. Despite the announcement of the new zone, it has remained poorly developed and appears to add little to aggressive Chinese growth on the west bank of the river.

Imagery and other photos show a great deal of industrial expansion on the Chinese side of the river adjacent to Hwanggumpyong and Wihwa Islands over the past five years. In stark contrast, the North’s territory remains entirely agricultural with little infrastructure and largely undeveloped for industrial use.  Since the announcement of the free trade zone, there has been virtually no new activity on North Korean territory, with the exception of a strip of land near a Chinese sports complex under construction. While it is too soon to tell, that activity may either be the start of some related North Korean effort or the Chinese are merely using the land as a dump for waste (i.e. soil) from their project.

China’s willingness to collaborate on the development of new enterprise zones is, above all else, a strategic decision about strengthening its bilateral relationship with the North and pushing Pyongyang towards market mechanisms. Beijing must also see an advantage in acquiring the rights to these adjacent Korean lands, particularly in view of the very liberal set of incentives for Chinese investors that do not apply outside the physical bounds of the zone. These incentives may be more important than whether the zone is on an island or the DPRK mainland. For the North Koreans, locating the zone on these islands, aside from potential political and economic benefits, may provide reassurance that any potential political or economic “contagion” can be contained on the Chinese side of the river and prevented from infecting the DPRK mainland.

In either case, the key and still unanswered question, especially in light of the fact that little has changed on North Korean territory since the announcement of the zone, is who will build the infrastructure necessary to attract investors to set up manufacturing and other facilities? It is worth remembering that the Korea Land Corporation and Hyundai Asan provided a platform for South Korean investors in the Kaesong Industrial Zone with ROK government subsidies. Strategic motivations aside, the answer may lie with local Chinese governments and businesses who will have to be motivated by the economic incentives of cheap North Korean labor and raw materials and the potential for preferential access to North Korean markets for their wares.

This article is a “38 North” exclusive in cooperation with DigitalGlobe’s Analysis Center, with contributions by Robert Kelley, Michael Zagurek, and Bradley O. Babson, and translation assistance by Nat Kretchun and Jennifer Lee.