When the South Korean fast ferry Hankyoreh sailed out of North Korean waters into the cold wind and waves of the East Sea on the morning of 8 January 2006, it carried a sad and somber group of South Korean workers, ROK officials, and personnel from the Korean Peninsula Energy Development Organization (KEDO). These were all that remained of a decade long multinational effort transforming what in 1994 had been only a paper notion into a modern construction complex of steel and concrete. KEDO’s profile on the North Korean landscape was unmistakable, its impact on Pyongyang profound. Yet, real knowledge and understanding about the organization in public and official circles in South Korea, Japan, and the United States was terribly thin at the beginning, and remains so to this day.[1] 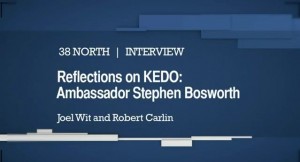 In a new 38 North interview, “Reflections on KEDO,” Joel Wit (38 North founder and Visiting Scholar at the US-Korea Institute at SAIS), hosts a conversation with Ambassador Stephen Bosworth (former US Special Representative for North Korea Policy and current Dean of The Fletcher School at Tufts University) and Robert Carlin (CISAC Visiting Scholar), about their experiences with KEDO. All three were involved with KEDO at different times in its ten year history and provide insights into what it was like on the ground building this multilateral organization. They discuss some of the major challenges in dealing with the North Koreans, as well as the cultural learning curve faced by KEDO’s multicultural staff. From the perspective of direct experience, they examine both KEDO’s accomplishments and the opportunities missed by the organization’s abrupt termination. In the final segment, Ambassador Bosworth also reflects on the Obama administration’s North Korea policy and provides his views on how to improve relations with the North in the future.

My personal conclusion was they [North Koreans] were very serious about what they were doing—the enterprise that we were involved in. This was not something just being done for show. For them, it was not just KEDO and the Agreed Framework and light water reactors, but it was clear for many of them this was important because it was setting a series of precedents for how North Korea could begin to engage with rest of the world in a more direct and active fashion. ~ Ambassador Stephen Bosworth, “Reflections on KEDO,” a 38 North interview

Part II: Dealing with the DPRK

Part IV: The Obama Years and Beyond

The 38 North video series is generously supported by the Carnegie Corporation and the US-Korea Institute at SAIS.