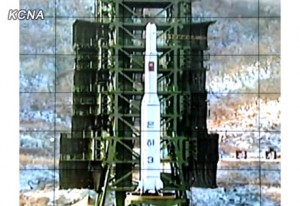 Pyongyang’s decision to launch its Unha-3 rocket and accompanying satellite during the countdown to a tightly poised South Korean presidential election seems odd, on the face of it. North Korea’s preference, it is widely assumed, is for a pro-engagement administration under Moon Jae-in, given his likely resumption of large-scale inter-Korean assistance and joint projects along similar lines to President Roh Moo-hyun, whom Moon served under as chief of staff. Launching immediately after the election would have allowed the political impact to be absorbed during South Korea’s lengthy pre-handover interregnum, and would have been seen more as a parting shot at the departing lame-duck President Lee Myung-bak, the target of so much personalized invective from Pyongyang.

Why then, did North Korea risk giving the conservative Saenuri Party candidate, Park Geun-hye, a potentially vital edge come December 19? Kim Jong Un may have concluded that both South Korean candidates have signaled a basic desire to revive inter-Korean dialogue, although they take opposite stances on conditionality. It is also possible that the launch was timed primarily with a longer-range audience in mind—as a wake-up call to the second Obama administration, or perhaps a demonstration of Pyongyang’s strategic independence from China under Xi Jinping’s newly established watch? With these loftier aims in mind, Kim Jong Un could have discounted the impact of its test upon the presidential race in Seoul, concluding that South Koreans were unlikely to feel directly threatened, having already learned to live in the shadow of the North’s short-range ballistic missiles and conventional artillery.

However, this level of indifference is just not credible. Even allowing for any policy shift under Kim Jong Un, North Korea’s track record of trying to influence the outcome of Southern elections, although rarely effective, is deeply rooted in Pyongyang’s legitimacy-based view of inter-Korean politics: it is simply an irresistible temptation. Alternatively, one cannot entirely discount the possibility that the decision to launch early in the original window was taken on technical grounds, however disingenuous KCNA’s report of “technical problems in the first-stage control engine” appears in retrospect. And then there is the “12/12/12” factor: was the auspicious-sounding date simply too tempting for Kim Jong Un to pass up? North Korea officially operates on the Juche calendar of course; 2012 being Juche 101. Yet the previous, unsuccessful launch date in April also came earlier than expected, on Friday the 13th, reputed to be Kim Jong Il’s favorite horror film. Juvenile as this may sound, one should not forget that Kim Jong Un is still a young man, and has elsewhere displayed a prankish sense of fun: the thrill of carrying out a successful launch on the back of successful deception is also good reputation-building material.

In any case, for all the focus on timing, North Korea’s missile and nuclear advances have decades of programmatic momentum behind them. The timing of individual tests is framed in a political window, within which domestic and international considerations are weighed. But the requirement to test is driven ultimately by technical thresholds and long-term strategic goals. By this measure, Kim Jong Un is observing continuity with Kim Jong Il’s pursuit of a long-range nuclear-tipped missile capability. With two tests conducted in his first year in office, the short-term priority has clearly been to perfect the delivery system, under the guise of a scientifically pointless and exorbitantly expensive space program. Metaphorically, Jong Un has also saddled his domestic reputation to the rocket program, revealing himself as a risk taker; another young man’s trait.

For all the variables, the radical but supportable conclusion is that Kim Jong Un’s decision to launch the Unha-3 rocket one week before South Korea’s presidential election was a calculated act to boost Park Geun-hye’s chances of victory. There has been speculation that Moon’s pro-engagement platform may benefit from the launch. This may persuade some voters, but on balance a modest net marginal gain is more likely to accrue to the Park ticket. In such a tight race this could be decisive. All except one of 20 surveys conducted from December 10-12 gave a lead to Park Geun-hye, ranging from 0.1% to 6.8%. The one exception had Moon ahead by a narrow margin. However, early December polling also suggested Moon’s Democratic United Party (DUP) was making up ground. His prospects received a further boost on December 16 from the decision of the hard-left candidate, Lee Jong-hee, to withdraw and endorse Moon. While the race is therefore too close to call, a Park win will leave many to conclude that North Korea’s rocket launch, so close to the polling date, was a critical factor.

Why would North Korea favor the conservative Saenuri Party’s anointed successor to Lee Myung-bak? Counter-intuitive though it appears, Pyongyang has more than one reason to prefer Park. First, large-scale assistance from the South of the kind Moon is likely to offer, even with limited conditionality, is a gift horse that North Korean leaders will look very carefully in the mouth. Pyongyang was wary of President Kim Dae-jung’s Sunshine Policy, suspecting that being slowly “killed by kindness” was its hidden premise. If Sunshine lost much of its luster under the weaker leadership of President Roh Moo-hyun, accepting “gifts” from South Korea continues to pose legitimacy threats to Pyongyang’s leadership. Hence, engagement from elsewhere—including China—is preferred. Going back to Sino-Soviet days, North Korea has always sought to establish a balance of external benefactors. However, Pyongyang’s material need for inter-Korean largesse has declined since 2009 because China has committed to a strategy of closer support for the North. As Pyongyang’s isolation has increased on other fronts, it has been pulled into China’s exclusive economic orbit. KCNA’s December 12 bulletin, given over to celebrating the successful launch, inadvertently supplied the definitive judgment on China-North Korea ties, declaring that “(t)he tireless efforts Kim Jong Il had made in his lifetime has turned the DPRK into a full-fledged satellite state.”[1]

Second, Park has maintained discrete channels of communication, and left open the possibility of dialogue with the North in her campaign statements. A resumption of inter-Korean exchanges on a smaller scale may, in fact, be optimal from North Korea’s vantage point.

Third, to prevent unflattering comparisons with the South’s runaway economic success, Pyongyang needs to preserve distance and a level of manufactured hostility in relations with Seoul. Maintaining a semblance of external threat from Seoul (Washington too) remains essential for justifying North Korea’s information blockade and military-skewed priorities. A Park administration, even if it pursues inter-Korean diplomacy, is unlikely to get too close for comfort.

Fourth, and most significant from North Korean eyes, as the daughter of President Park Chung-hee, Kim Il Sung’s longest-standing nemesis, Park conveniently fits an atavistic Korean political mold that transcends ideology. For Kim Jong Un she mirrors a heredity principle that reflects vicariously on his pedigree. From this symbolic tethering point, the policy orientation of a Park Geun-hye administration counts for less than the fundamental symmetry of blood ties. Unfair as this may be to her, it is a point on which Kim Jong Un’s fledgling leadership will seek to capitalize to further establish its own legitimacy.

“Pyongyang, December 12 (KCNA) — At around 12:00 Wednesday, it was reported that the second version of the satellite Kwangmyongsong-3 was successfully launched in the Democratic People’s Republic of Korea.

The report has given a great pleasure to the local people. Pak Jong Min, a Pyongyang citizen, told KCNA:

“The satellite’s successful launch is of weighty significance in building a thriving nation. I would like to extend heartfelt congratulations to the satellite’s manufacturers.” Ri Tae Ik, living in Taesong District, Pyongyang, said:

“It seemed as if I were seeing the flying of the satellite into the sky. The news of its successful launch reminds me of general secretary Kim Jong Il, who would be so pleased to see it. The tireless efforts Kim Jong Il had made in his lifetime has turned the DPRK into a full-fledged satellite state.”