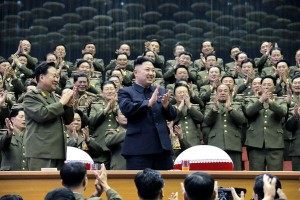 This has been a dreadful year for North Korea and its relations with the outside world. Indeed, during his two years at the helm in North Korea, after the death of Kim Jong Il in December 2011, Kim Jong Un, has managed to plunge his country to the lowest point in its relations with the international community, including China. Tragically, North Korea does not see it this way. Pyongyang says its missile tests in April and December 2012 were satellite launches, for which it has a sovereign right, regardless of the United Nations resolutions prohibiting them. The North’s February 2013 nuclear test was in response to additional sanctions imposed due to these launches. The harsh rhetoric from Pyongyang from March to June 2013, threatening the US, South Korea and Japan with pre-emptive nuclear attacks and posting a video of a simulated nuclear attack on New York were, the North said, in response to the yearly joint US-ROK military exercises.

The list goes on and on and includes the incarceration of Kenneth Bae, a US missionary found guilty of an unspecified crime and sentenced to 15 years of hard labor. South Korea also experienced this intemperate behavior when Pyongyang recently and abruptly refused to permit North-South divided family reunions. When Pyongyang issued its statement on November 23, 2013—the third anniversary of its artillery shelling of South Korea’s Yeonpyeong Island that killed four people—which declared that the North would respond to any provocation from the South with an attack on the President’s compound, making it a “sea of flames,” it further exacerbated this sad series of events.

The real threat from North Korea, however, is more than the over-the-top rhetoric coming from Pyongyang. The real threat is its enhanced nuclear programs and the assessment that the North has both a significant number of plutonium-based nuclear weapons and an active uranium enrichment program meant to build new uranium-based bombs. Moreover, it appears that North Korea has restarted operation of its 5 MW reactor at Yongbyon, which eventually will provide more plutonium for additional bombs. It has also expanded the uranium enrichment facility at that complex, presumably meant to also produce weapons-grade material.

North Korea’s missile programs continue as well, with numerous short and medium-range ballistic missiles as well as long-range ballistic missiles capable of reaching distances as far as the United States. Recently, the development of the road-mobile, long-range KN-08, capable of reaching the US, has been of great concern, as has the new mobile Musudan missile with a range of 4000 kilometers. Pyongyang also has other military programs, some even less transparent, such as its chemical and biological programs and conventional weapons, which continue to pose a significant danger to the United States and its allies in Seoul and Tokyo.

The North now says it wants to return to the Six Party Talks (6PT), unconditionally. It walked away from these negotiations in 2008, after refusing to commit in writing to a verification regime that would have permitted monitors to leave Yongbyon to inspect other specified areas and collect soil and water samples for testing in facilities outside of North Korea. If Pyongyang had agreed to this type of verification, halted its nuclear programs and started to disable and eventually dismantle them, the US and other countries in the 6PT were prepared to provide North Korea, in an “action-for-action” process, security assurances, economic assistance, light water reactors and eventual normalization of relations.

Now after five years of disengagement, Pyongyang says it is willing to return to talks. Of course, over this period of time, it has enhanced its uranium enrichment program, worked on miniaturizing its nuclear weapons and built more sophisticated missiles, all while selling whatever weapons it could, to whomever was willing to conspire with North Korea in violation of UN Security Council resolutions. In fact, North Korea has enshrined its development of nuclear weapons with its “Byungjin” policy—putting economic and nuclear development on equal footing.

While the North claims that it is prepared to implement the September 2005 Six Party Talks Joint Statement, its past behavior leads many of us to seriously doubt that it will implement this agreement. Rather, the North is more likely to return to the talks with a real objective of garnering attention and seeking compromises that will eventually permit it to retain some nuclear weapons while accruing all the benefits promised in the Joint Statement. This assessment is based on 20 years of fruitless denuclearization negotiations. And for these obvious reasons, the United States, South Korea and Japan are not presently prepared to return to the Six Party process.

If North Korea is serious about implementing the September 2005 Joint Statement, it should take unilateral steps to convince the many critics that renewed talks might prove productive. For example, to help build confidence, North Korea could unilaterally return Kenneth Bae for humanitarian reasons, as they did with the US Korean War veteran Merrill Newman.

On the WMD front, North Korea should unconditionally declare a moratorium on nuclear tests and missile launches. While affirming its sovereign right to launch a satellite (despite the prohibition of this under UN sanctions), Pyongyang should also state its willingness to forego this right and declare a moratorium on future tests of space launch vehicles. Second, the North should suspend operations of all facilities at the Yongbyon nuclear installation and allow international inspectors back in. Finally, the North should make it clear that once the 6PT are reconstituted, it is prepared to verifiably dismantle all of its nuclear programs, including its uranium enrichment effort at both known and undeclared facilities.

The likelihood of North Korea pursuing this approach would be enhanced if China also privately pushed North Korea in this direction. During the past year, China has expressed concern about North Korea’s brazen escalation of tensions through its missile launches, nuclear test and vitriolic commentary. As North Korea’s only meaningful ally, with a Peace and Friendship Treaty going back to 1961 that commits China to come to the defense of the North in time of strife, as well as being its main source for food and energy assistance, Beijing’s support is critical for the survival of the North.

It is time for Beijing to use its leverage over North Korea to convince the new leadership in Pyongyang that China will not accept a nuclear-armed North. This would require Beijing to push the North not only to accept the need for actions to build confidence but also for verifiable denuclearization in return for security assurances, economic assistance and eventual normalization of relations with the US, South Korea and Japan. Positive movement in this direction by North Korea, with China’s encouragement, would also help to enhance US-China relations.

A first step in this process would be to convene a preliminary meeting between senior representatives of the six countries to determine if North Korea is prepared to unconditionally declare a moratorium on missile launches and nuclear tests and to release Kenneth Bae for humanitarian purposes prior to any commitment to resume 6PT negotiations, assuming the North and the other five countries also state their willingness to abide by and verifiably implement the September 2005 Joint Statement. Hopefully, this would start the process of overcoming the considerable mistrust between all parties and begin to establish a clear understanding of what North Korea is willing to do and what, in turn, Pyongyang would receive from the other countries for their actions.

There is one more reason why we should move forward quickly. With change underway in the North, especially with the removal of Jang Song Thaek, Kim Jong Un’s uncle and the former “number two” official in Pyongyang, it would be even more advisable to engage the leadership in Pyongyang since dialogue of this type will at least give us clarity on its thinking about denuclearization as well as the future of relations with the United States.

If dialogue does resume, we should take steps to ensure that the negotiations are not going to be used by the North Koreans to buy time while they further develop their nuclear weapons and missiles. First, the North should understand that while these negotiations are being actively pursued, its moratorium on nuclear and missile tests would continue. Second, it would also be advisable to put a timeline on reconstituted negotiations. Six to nine months should be sufficient to reach an agreement if North Korea and the other countries are serious. Third, any agreement should also set a time limit for comprehensive and verifiable implementation. Negotiations with Pyongyang on denuclearization have been going on for 20 years. It is time we resolved these issues, expeditiously, comprehensively and fairly.