Recent commercial satellite imagery indicates that North Korea continues to experience difficulties in operating its 5 MWe reactor, which was restarted in summer 2013. A new sand dam constructed across the Kuryong River in early March 2014 to help ensure a steady, adequate supply of water for the 5 MWe reactor’s secondary cooling system and the experimental light water reactor’s (ELWR) primary cooling system, failed in two places between April 7 and May 16. A sudden dam failure could cause major safety issues at the operational 5MWe reactor since a reliable supply of water for the secondary cooling system is essential to prevent a dangerous heat buildup in the reactor core.

Imagery from early April to mid-May indicates that the 5 MWe reactor was probably shutdown or operated at reduced power levels for an undetermined amount of time.[1] This assessment is based on the absence of white foam discharge—caused by hot steam from the turbines after powering the reactor’s electric generators—from the drainpipe of the turbine building in the May 16 image. The foam reappears on imagery from May 18 and 22,[2] as repair work on the dam started. Imagery from June 22 indicates work at the breaches again, perhaps to repair new problems caused by rain the previous three days. Nevertheless, the foam was present then as well.

Exactly why this shutdown or operation at reduced power occurred remains unclear. One possible explanation could be that when it became apparent the dam was failing during the earlier period, the reactor operators worried its loss could cause the river channels to shift further to the east away from their cistern and shut down or reduced the power of the reactor for safety reasons. When that didn’t happen, because the dam did not completely fail and the river water was higher than normal, the decision was made to restart it.

In February 2014, North Korea experienced problems in ensuring the steady supply of water for the secondary cooling system of its operating 5 MWe reactor that resulted in either operating the facility at low power levels or shutting it down. To correct this problem, the North Koreans constructed a sand dam and a system of channels to raise the water level of the river in order to ensure a consistent supply of cooling water for the reactor. By the beginning of March 2014, the gate to regulate the water level was being installed in the middle of the dam. Water was flowing through the gate a week later and it appeared to be functional.[3]

However, imagery from May 16 indicates that the dam failed in two locations. The gate is gone and a 14 meter wide channel below it is present. To the north, nearly 40 meters of the dam has been washed away. (The wet sand above the dam indicates the previous water level was significantly higher.) Those failures may have occurred recently since the sand was still wet where river water flowed out of the channel. Moreover, there appears to be a significant amount of water still pouring through the two breaches (figure 1). While the problem may have been caused by the raised water level—perhaps from rain showers a few days prior that eroded the sand banks until they gave way—an important contributing factor appears to have been poor dam construction.

Imagery from May 18 and 22 indicates the reconstruction had already begun and by June 22, shows the reconstruction process well underway, dumping sand to rebuild the dam back to its previous level. The two breaches were still spilling water, however, at a lower rate than on May 16. At the dam’s center, the gate and footbridge had not yet been repaired. At the north end, about 20 meters of the dam, or approximately half of the damaged area, had been rebuilt (figure 2).

Figure 1. Before and after photos of the dam failure. 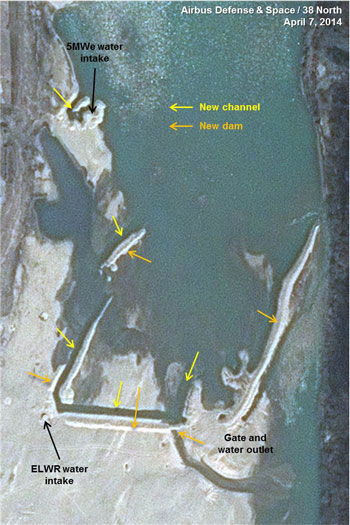 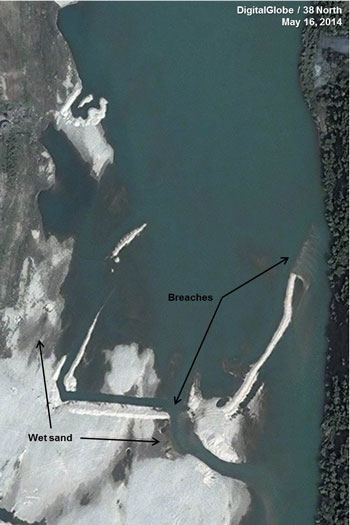 Since there was a one-month gap in the available satellite imagery coverage, it is not possible to know if the repairs were completed and another high water surge washed it out again, or if the repairs were never completed. Rainfall the three previous days may have caused high water and the sand erosion on the dam’s north end seen in the June 22 image.

New sand excavations, dug from the riverbed on the west side of the river, occurred between May 16 and June 22. Based on the scale of these excavations it is apparent a large amount of sand has been used in an attempt to repair the dam (figure 3). 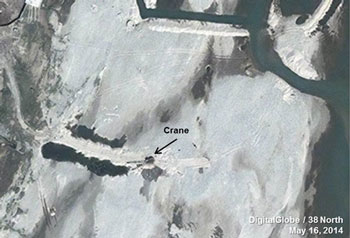 Since the restart of the 5 MWe reactor in late August 2013, an important indicator that the facility is operating has been the presence of a white foam discharge, produced by waste steam from the reactor’s turbine building. This foam has been present on the bank of the river in all but one photo of the site since it was restarted last year.

In the May 16 image, however, there is no white foam discharge present. Since the absence of foam indicates the reactor is not producing high-pressure steam to run the turbines and generate electricity, the reactor was probably either shutdown or operating at reduced power levels (figure 4) at that time. However, on May 18 and June 22, white foam was seen again, indicating that the reactor was producing high-pressure steam to generate electricity (figure 5). Unfortunately, due to this one-month gap in available imagery, it is impossible to determine if other shutdowns occurred during this period.

Exactly why this shutdown or reduced power occurred in May for such a short period remains unclear, especially since there appears to be adequate water for the 5 MWe cooling system to function in the May 16 image. One possible explanation could be that when it became apparent the dam was failing, the reactor operators worried its loss could cause the river channels to shift further to the east away from their cistern and shut down or reduced the power of the reactor for safety reasons. When that didn’t happen, because the dam did not completely fail and the river water was higher than normal, the decision was made to restart it.

Figure 4. 5 MWe reactor either shutdown or operating at reduced power in May. 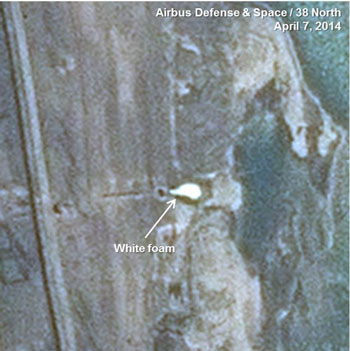 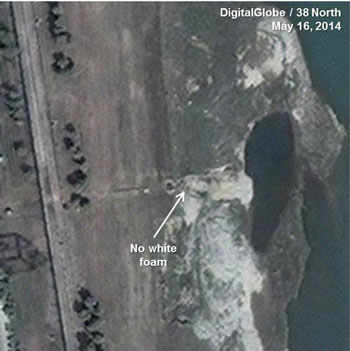 While the ELWR is externally complete and Pyongyang has clearly been moving equipment inside for installation, the facility has yet to become operational. It is unclear whether start-up has been delayed or if the project is proceeding according to schedule. If it has been delayed, one possible cause could be the difficulty the North Koreans face in producing LWR fuel assemblies. Another possibility could be continued failure of the dam meant to ensure a steady, reliable supply of water for the EWLR’s cooling system.

[1] Because no imagery is available between those dates, it is not possible to determine the exact amount of time reactor operations were altered.

[2] The analyst was personally shown imagery of Yongbyon by Skybox Imaging taken on May 18 and 22, which are referenced in this article but were not available for use.

[3] The placement of the dam and the way the channels that were dug to bring water to a cistern for the ELWR indicates the dam was built to support that facility. However, it also plays an important role in ensuring that the 5 MWe reactor has a steady supply of water.