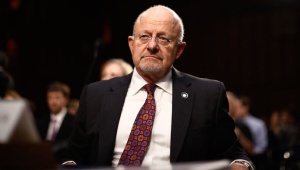 Barely two weeks after freeing US citizen Jeffrey Fowle (on October 22), North Korea has sent the two remaining American prisoners home, releasing them into the arms of the US Government’s highest-ranking intelligence official—Director of National Intelligence James Clapper.

Why the director of national intelligence should go to North Korea to pick up two American citizens is a good question, and it is probably at least slightly more complicated than why the chicken crossed the road. Initial news reports suggest it was a development “out of the blue.” We may be pardoned for being a little skeptical.

Without knowing exactly what has been going on—and news reports from anonymous US officials are all over the map—it is hard to say what the release of the Americans might mean, if it means anything at all. Early CNN reports said that the wheels started turning on November 5, after the North Koreans suggested to Washington that it send a Cabinet-level official to Pyongyang. It may be that the decision to send Clapper has mostly to do with allegorical concerns on both sides—the North wanted someone “high level,” but the Obama Administration did not want anyone of political consequence, and so Clapper was picked as the lowest common denominator.

Nevertheless, US intelligence officials (past and present) have been going on “secret” visits to North Korea for the past couple of years. In that context, the escalation of representation to Clapper’s level on the US side, even if it was not formally part of the secret dialogue, will carry some symbolic freight. The back-channel US-DPRK meetings so far do not appear to have accomplished very much, but these things often unfold slowly and they may at least have established contacts that turned out to be useful in this case.

As a matter of fact, it is not unusual for the North Koreans to work through intelligence channels. Over the decades, much of the inter-Korean dialogue has been conducted behind the scenes through ranking officials of the South’s national intelligence service. That was true even during years when, at least on the surface (e.g., during ROK President Lee Myung-bak’s administration), nothing else was going on. And a ranking official in the North’s Ministry of State Security was the means by which Pyongyang carried on a lengthy, secret dialogue with Tokyo before Prime Minister Koizumi’s visit to the North in September 2002.

It is very unlikely that the recent prisoner release deal was worked out without Kim Jong Un’s knowledge and approval. At the very least, Kim has now cleared the decks of a low-level irritant in discussions with the US, something his foreign ministry may have been urging him to do. If history is any judge, however, the release of these Americans will not make a wit of difference to the current state of US-DPRK relations, and will not get the two sides closer to resuming anything like a useful dialogue.

The North Koreans presumably know this, but they do not enjoy holding US citizens prisoner for long periods of time, and have. They have for months been looking for a way to get rid of the three in custody. US officials have quickly underlined that the release of the Americans hasn’t changed Washington’s position on what the North must do on nuclear and human rights issues. News reports say that Clapper was sent as a presidential envoy “prepared to listen” (which is more than Bill Clinton was instructed to do in August 2009 when he went to pick up two American reporters). How much listening Clapper had to do is unclear, but in any event, the idea that he had to undertake any heavy lifting (or as the President said, perform “a challenging mission”) is highly unlikely. The North Koreans had already decided to release the two Americans, otherwise they wouldn’t have gone ahead with Clapper’s visit.

(Presumably, there were no B-52 training flights in the neighborhood during the duration of Clapper’s mission, thus avoiding last minute cancellations as twice happened with Ambassador Robert King.)

What many people seem to consider a big question is why the North Koreans decided to release the two men now. The coincidence of this episode and a North Korean foreign ministry pronouncement on November 4 might be relevant. It is at least head scratching. The pronouncement (delivered in the form of a relatively low level vehicle: a foreign ministry spokesman answering KCNA) connected two key issues now on the table—human rights and the North’s nuclear program—in a new, seemingly threatening way, suggesting that if the former were pressed by the US and others too hard, it would elicit a response in the form of further development (a test?) in the nuclear area.

Yet, at the same time, the spokesman treated the US administration circumspectly (i.e. without personal invective) and even implied that nuclear issue could be discussed if the US were not “keen to bring (the North) down at any cost.” It held open the prospect that if the “present” US administration was prepared to go back to what it suggested was acceptance by previous US administrations of the existence of the DPRK, then the door would open for dialogue along the lines of the September 19, 2005 joint statement, which it called the “basic groundwork” for denuclearizing the Korean Peninsula.

The full quote is worth repeating:

The present U.S. administration, the present U.S. secretary of State, in particular, unlike the successive U.S. administrations, are officially pursuing a policy for bringing down the state and social system of the DPRK over the “human rights issue,” thus reneging on the September 19, 2005 joint statement which calls upon the DPRK and the U.S. to “respect each other’s sovereignty and exist peacefully,” the statement which laid a basic groundwork for denuclearizing the Korean Peninsula.

The denuclearization of the Korean Peninsula has become totally meaningless for the DPRK under the situation where the U.S. is reneging on   its commitment. It is self-evident that one party cannot discuss its unilateral disarming with the rival party keen to bring it down at any cost.”