A 38 North exclusive with analysis by Nick Hansen

Recent commercial satellite imagery indicates new activity at the 5 MWe Plutonium Production Reactor at North Korea’s Yongbyon Nuclear Scientific Research Center after an almost five-month hiatus in operations from late August until mid-December 2014. One possibility is that the North is in the early stages of an effort to restart the reactor. However, since the facility has been recently observed over a period of only a few weeks, it remains too soon to reach a definitive conclusion on this and also on whether that effort is moving forward or encountering problems. Continuing to monitor the reactor site should provide more information in the future.

Activity at the 5 MWe Reactor

Recent commercial satellite imagery beginning December 24, 2014 through January 11, 2015 indicates new activity at the 5 MWe Reactor that may be related to a process of attempting to restart the plutonium production reactor after an almost five-month shutdown. On December 24:

In imagery from January 1, 2015, a week later, little has changed although there are hints of additional activity. Two streams of melted water are seen on the turbine-building roof. Also, snow has now been melted off the reactor’s roof over the north heat exchanger. There appears to be steam coming from the pipe, which exits the reactor building from that exchanger. While it is not possible to tell how much water is being released into the river, the pools are still ice-free. 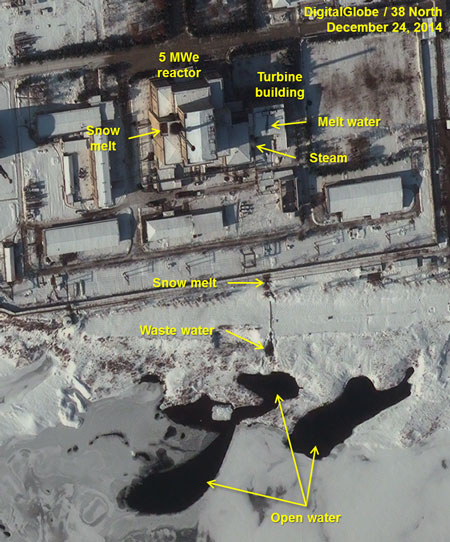 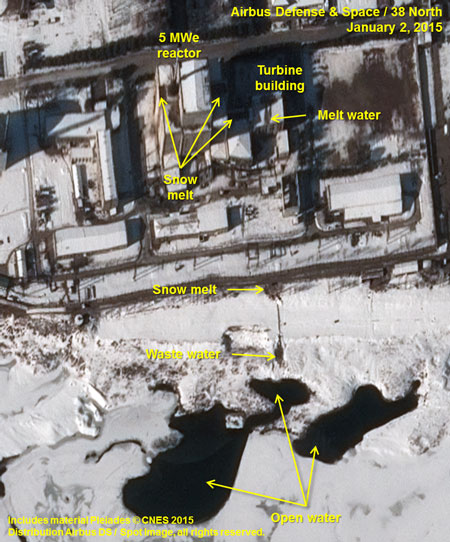 Ten days later on January 11, once again there were small changes in the appearance of the 5MWe Reactor and the related surrounding buildings. There was some enlargement of the snow-melted areas on roofs of the reactor and turbine buildings, and a small amount of steam was coming from the relief valve on a steam pipe just before it enters the turbine building.

Restart of the Reactor?

There are clearly differences between imagery from late 2014 to early 2015 and from over a year earlier when the 5 MWe Reactor was known to have been operating. Imagery from December 27, 2013 showed snow melted off the roofs of all the buildings related to the 5 MWe Reactor. Moreover, white foam can be seen at the end of the turbine building’s steam and wastewater drainpipe. (Its absence in recent imagery may be related to the installation of new piping previously identified by 38 North).

Exactly what is happening at the 5 MWe Reactor remains unclear. One possibility is that the North Koreans are in the early stages of an effort to restart the reactor after an almost five-month hiatus in operations. Since this effort has been observed over a period of only two weeks, continuing to monitor the reactor site should provide more information in the future.

Despite previous predictions that Pyongyang would have begun operations of the experimental light water reactor (ELWR) already, the ELWR continues to remain dormant. One major change occurred in July 2014 when a flood destroyed an earthen dam constructed to ensure that the reactor’s cooling system had a reliable supply of water. As of early 2015 there has been no attempt to rebuild the dam or provide a new source of water.

The reactor building itself does not appear to be heated since no snow appears to have melted off the roof in the December and January images. Unlike in winter 2014, the roads and entryways have been cleared of snow. The pump house access road has also been cleared. 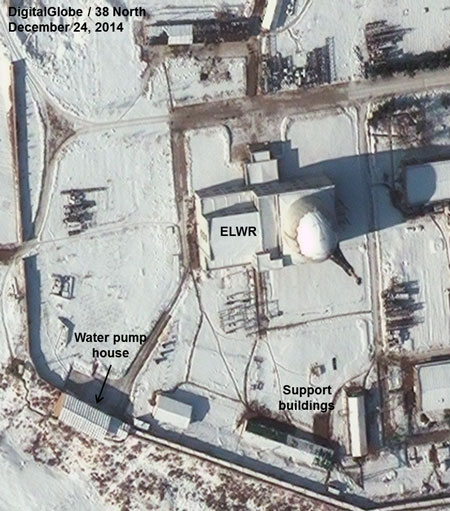 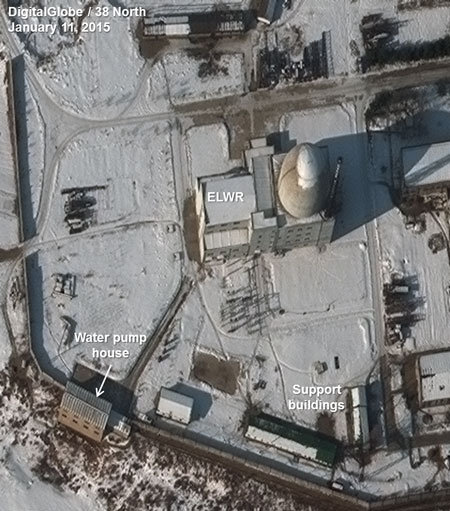 Based on this limited activity it is not possible to assess when the ELWR will be tested and become operational. The project may be experiencing difficulties including any number of possibilities such as problems in producing fuel assemblies to addressing the requirement for an adequate water supply to cool the reactor.