This is a recurring problem—for foreign policy watchers of any stripe, but especially Korea-watchers. Every time a dictator takes a few days off, Twitter freaks out, deciding that the he’s dead, there is a coup underway or that he’s been abducted by aliens. The buzz surrounding the very much alive Putin was exactly the same as the wild rumors that surrounded Kim Jong Un’s six-week disappearance in 2014. It’s worth revisiting that episode and asking whether we can’t find a better way to discuss a long absence, especially since Kim Jong Un is probably going to take a few vacations in the future.

Maybe prolonged absences have always set careless tongues wagging, but I get the sense things are worse in the age of Twitter. After Xi Jinping dropped out of sight for two weeks in 2012, conspiracy theories emerged about an assassination attempt. Even Iran’s Supreme Leader, Ayatollah Khamenei, who doesn’t appear in public all that often, had to make a special appearance for Arbor Day a few weeks ago to squelch rumors that he was dead.

Of course, foreign leaders do get sick. Kim Jong Il had a massive stroke in 2008, while North Korea admitted that Kim Jong Un’s recent absence was related to ankle surgery. And since autocrats tend to leave office feet first—at least the ones that don’t remain in office from the after-life; looking at you Kim Il Sung—it is understandable to watch their vital signs. 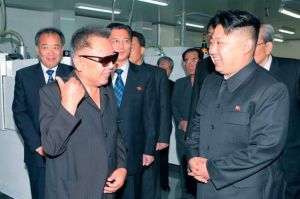 But just a cursory review of how Kim Il Sung and Kim Jong Il shuffled off this mortal coil should remind us that prolonged absences, while interesting, aren’t reliable predictors of anything. Usually, the rumors turn out to be nothing. When the two Kims dropped dead, we knew about it pretty quickly.

Kim Il Sung wasn’t quite the busy-body that Kim Jong Il was, but in 1994 there was no speculation at all about his health. Kim was taking and scheduling meetings until the very end. The first-ever inter-Korean summit was scheduled for late July when Kim suddenly dropped dead on the 8th. North Korea announced his death the next day, on July 9.

Kim Jong Il, too, had the courtesy to drop dead quickly. His last public appearance was on December 15, 2011. He died on the 17th; North Korea announced it on the 19th. There are rumors that efforts to consolidate Kim Jong Un’s position delayed the announcement by a day, but that’s hardly much time in the scheme of things.

Of course, while he was alive, Kim Jong Il did have a number of prolonged absences. Obviously, the big example followed Kim Jong Il’s 2008 stroke. Kim was last seen on August 14, 2008 and seems to have had a stroke shortly thereafter. When he missed a major military parade in September, Western press reported that US and South Korean intelligence believed that the stroke was the most probably cause. North Korean state media reported his presence at a soccer game in October, although he didn’t make a visible appearance until April 2009, looking much worse for the wear. Still, in the interim, his neurosurgeon had given an interview that more or less accurately described the state of Kim’s health in December 2008. (He gave another after Kim died in 2011.)

Despite North Korean media keeping mum, word leaked reasonably quickly about the nature of Kim’s absence. More importantly, by the time the world noticed he was missing, according to Kim’s doctor, he was on the mend. Nevertheless, we were still treated to all kinds of speculation including accounts that Kim had pancreatic cancer and, my favorite, Toshimitsu Shigemura, the straight-up nut-job who claimed that Kim Jong Il had actually died in 2003 and had been replaced by a stunt double in a horrible North Korean remake of the American movie Dave. (The film starred Kevin Kline as a Presidential impersonator who gets the job for real after the real President strokes out.)

The field of people watching North Korea is especially vulnerable to this sort of nonsense for any number of reasons—the Kim family functions as a monarchy and the tales about it are bizarre to begin with. But more than anything else, the endless speculation probably reflects our collective wish that the regime collapse. For whatever reason, people focused on the fact that Kim had fallen ill, not the fact that he was recovering and remained in power. If anything, a prolonged absence suggests stability.

After his stroke, Kim Jong Il recovered to live three more years and, when he finally did go down for the dirt nap, he was succeeded by Kim Jong Un. There was no coup.

So, maybe we should just all calm down.

World leaders take prolonged absences for all kinds of reasons including, yes, a touch of the flu or back spasms. If a leader misses a major event, like when Kim Jong Il missed the 60th anniversary of the Korean People’s Army, that’s interesting—that suggests real health issues. But even health-related absences are ultimately pretty boring, given that health problems are rarely fatal. The anecdotal data simply does not suggest that prolonged absences are correlated with a change in power. When world leaders drop dead, as we’ve experienced with the Kim family, it is sudden and we know about it.