While North Korea conducted nuclear tests in 2006, 2009 and 2013, some analysts have suggested that Pyongyang may have conducted a fourth very low-yield nuclear detonation in spring 2010 in the West Portal area of the Punggye-ri nuclear test site. While this assessment is based on radioisotope detections and analysis of seismic signals, commercial satellite imagery of the site at the time of the suspected event has been a missing piece of the puzzle. A new review of imagery from 2009 through 2011 adds to these suspicions but the evidence still remains inconclusive.

The debate over North Korea’s suspected 2010 nuclear explosion first emerged when a Swedish radiochemist, Lars-Erik De Geer, claimed that radioisotope data collected by monitoring stations in South Korea, Japan and Russia showed Pyongyang had carried out at least two small nuclear explosions of 50 to 200 tons in April and May 2010 at the Punggye-ri nuclear test site.[1] A subsequent analysis by Christopher Wright, who used atmospheric transport modeling of the observed radionuclides, agreed with De Geer and concluded that the most likely origin of the radionuclides was near the site of Pyongyang’s declared nuclear tests in 2006 and 2009.[2] Based on atmospheric transport models of how weather conditions might carry particles, Wright agreed that the most likely origin was a nuclear event at Punggye-ri on May 11, 2010. Gerhard Wotawa also reached a similar conclusion that a low-yield test or tests could have taken place at Punggye-ri in May 2010.[3]

De Geer’s initial finding was quickly met by skepticism, due in large part to the absence of seismic data that would indicate a nuclear explosion and the unusual nature of his scenario (two very low-yield tests conducted in the same chamber). While detection of noble gases like xenon and fission products such as lanthanum suggests a nuclear event of some sort, radionuclide data alone cannot be conclusive in supporting such a claim. As Jeffrey Lewis has pointed out, a leak of radioactive gas at one of many civilian nuclear power plants operating nearby might have accounted for the detection of atmospheric radionuclides in 2010, given the absence of corroborating seismic activity.[4]

The missing seismic piece of the puzzle may have been provided earlier this year. In 2012, a group of three seismologists studied data recorded at a CTBTO International Monitoring System (IMS) station in Northeastern China and found no evidence of an underground explosion in the periods suggested by De Geer.[5] However, in 2015, two Chinese seismologists reached a different conclusion by examining regional seismic data recorded at multiple Chinese IMS stations over a larger window of time. Miao Zhang and Lianxing Wen identified a small seismic event on May 12, 2010 with an estimated nuclear yield of 2.9 tons that they believe might have been a nuclear test. [6]  This event is significantly smaller than the estimate of a few hundred tons suggested by DeGeer and Wright. The event is also later than DeGeer’s initial estimate, although it is consistent with other analysis of radionuclide data suggesting a later event time.[7] Moreover, it is interesting to note that the seismic event identified by Zhang and Wen happened after North Korea released a statement about a successful thermonuclear test. As Jeffrey Lewis has pointed out, the initial media report on the KCNA announcement came more than seven hours before the event identified by Zhang and Wen. This undermines the persuasive power of De Geer’s argument, given that De Geer used a Rodong Sinmun report on May 12, 2010 about success with fusion reactions as evidence to support his conclusion about a low-yield nuclear test.

A new examination of satellite imagery from before and after the May 2010 date of the suspicious event indicates few if any activities that might be related to the conduct of a very low-yield nuclear test. Imagery confirms that if a test did occur, it would have been in the West Portal area where Pyongyang’s 2009 test was conducted. During that time frame, there is no evidence of activity at the East Portal, site of the 2006 detonation, and tunnel excavation at the South Portal area appears to be still at an early stage.

Imagery of the suspected area beginning seven days before North Korea’s second nuclear test in May 2009 continuing through June 2010 and beyond indicates the presence of temporary shelters near the tunnels. These shelters probably consist of a metal or wooden frame with a tarp or plastic sheet covering and are used extensively at military installations. Their presence could be one indicator that the site was still active during the time period in question. However, temporary shelters also seem to have been present in varying numbers throughout 2012, when there was very little activity at the test site and no reports of low-yield tests.

Even more important would be the presence of cables used to detonate a blast and to collect information leading from the nearby control building to the tunnel entrances as well as camouflage netting to hide activities. Given the critical importance of whether netting and cables were present in making a judgment on the likelihood of a suspicious event, 38 North asked four highly experienced imagery analysts to examine the available imagery. Only one concluded that netting and cables were present. The others believed that, while the discoloration present might be cables or netting, such a determination was not possible since the imagery was of insufficient quality to say for sure one way or the other. Indeed, imagery of the West Portal area from September and August 2013 shows the kind of contrast needed to make a more definitive call on the presence of netting as well as discoloration thought to be trenches, possibly to drain water or for cabling. 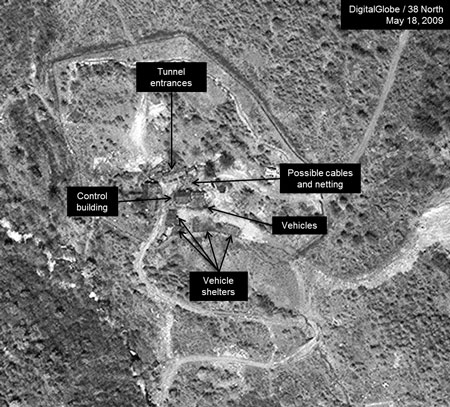 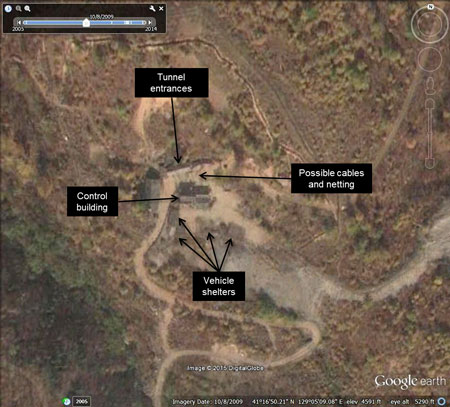 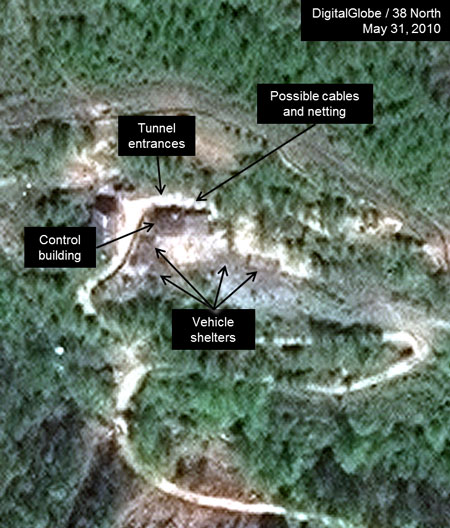 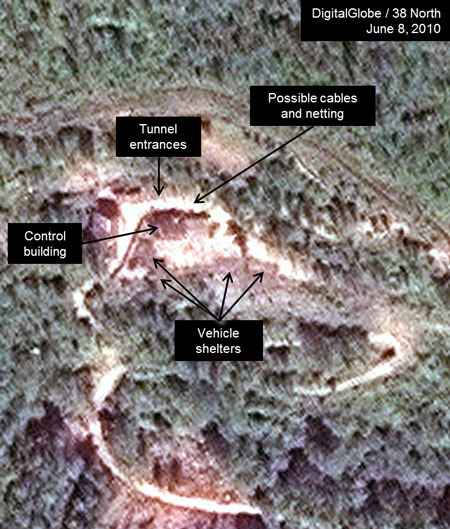 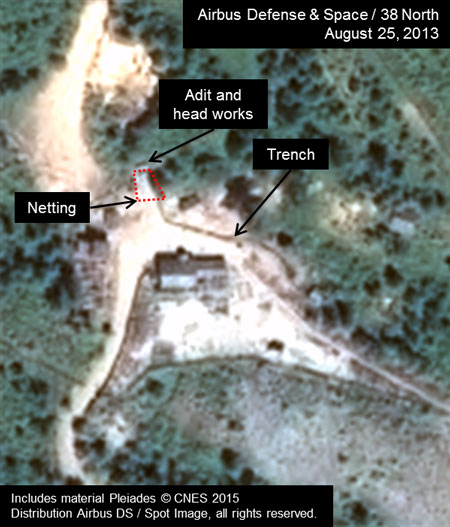 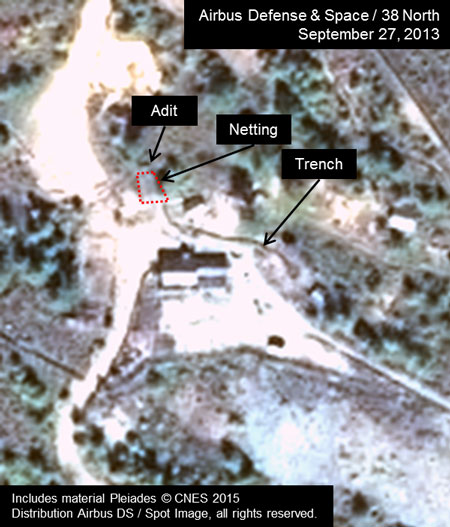 Do Three Inconclusive Pieces of Evidence Equal Something More?

There are obviously all sorts of unanswered questions that complicate reaching a conclusion about whether North Korea conducted a very low-yield nuclear test in 2010.

But the fact that evidence provided by seismologists is consistent with some radiochemical and atmospheric transport modeling around the time of the event—the morning of May 12, 2010—should be cause to seriously consider this possibility. True, the timing is not consistent with the DPRK announcement—which came before the event—of a fusion experiment conducted on April 15. But that should distract from the evidence.

While the available imagery does not add certainty to this picture, it does add to the suspicions created by other possible pieces of evidence. If there had been no signs of activity at the site, a definite “thumbs down” call might have been made. The presence of temporary shelters during the time period of the suspected blast is suspicious, but shelters are also present at the site at times when no blast was suspected. The presence of cabling, reinforced by the presence of netting, would strongly indicate that a test occurred, but, as previously noted, only one of four analysts who reviewed the available commercial satellite imagery gave a definite “yes,” given the low resolution of the images.

And then there is a final mystery; why would the DPRK conduct such a very low-yield nuclear test? Once again, the waters are muddied by uncertainty after uncertainty. In theory, a very low-yield nuclear test of a few tons could be used to verify the design of a trigger mechanism in order develop confidence in a nuclear weapons design while saving fissile material and avoiding detection. That explanation is straightforward and sounds like a test that the DPRK might want to conduct. However, American nuclear bomb designers were skeptical about the value of such tests during a test moratorium in the early 1960s. Whether that skepticism applies to North Korean weapons designers 40 years later remains unclear. And finally, the test might actually have been larger, maybe tens of tons of yield, and more useful if it was “decoupled,” namely conducted in a large cavity in a deep tunnel. However, we have no idea whether such a cavity was present at the suspected DPRK test site.

Where does all of this leave us? If higher resolution imagery were available allowing a more definite call on the presence of cabling and netting that would help tip the balance in favor of concluding a fourth test did occur in 2010. But that imagery is not available. And barring any new evidence on other fronts, it seems unlikely the debate will be resolved. We have our suspicions—and they are serious given the available radioisotope, seismic and imagery evidence—but they remain just that.