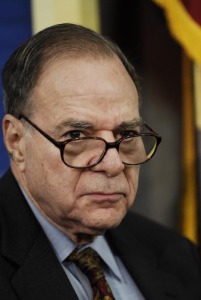 During his long career as a journalist, Don Oberdorfer, who died July 23, 2015, not far into his 85th year, wrote a lot of newspaper articles. He interviewed countless sources, many of which were or became central figures in the events that shaped history. He traveled, he observed, he listened, and in many cases he was on the scene when key events unfolded. I’ve always thought how lucky we were that all of that experience came together when, in his last 20 years, he focused on Korea.

What Don brought to the Korean issue was perhaps unmatched—experience, to be sure, but much more than that. His was a sober, realistic, well-tuned understanding of how policies, personalities and events interact. He had a canny sense of the moment and how the person he was interviewing filled it. Best of all, he could communicate all of this in language that took you along on the journey, either through the pages of his books or during one of his many public presentations.

Language, we seem to have forgotten in the age of tweets and emails, is really the same thing as thought. If you can think clearly, you can write clearly. Don’s style was simple, almost deceptively so. If necessary, a passage could become elegantly complex, but it was never tangled. The real treat was when he used the beauty of the English language to make an idea or a description shine, bringing a reader into the immediacy of the moment and then, effortlessly, up to the heights of the perspective of history. Yet it is not style that makes his wonderful book The Two Koreas so important or valuable; it is the marriage of language and thought, the imperceptible but crucial balance of fact, perception and analysis.

What we most need in thinking realistically and sensibly about Korea is what Don brought to the problem, and what with his passing, we now sorely lack. With his softest of southern accents, Don could calmly help you down from the cliff of some emotional foolishness you’d just espoused on the Korean issue. Returning from a trip to North Korea, with his patient, low-key questions he drew out your most important observations. On Korea, many people feel the need to have sharp knives. Don did not. Other than a few barbs at Jimmy Carter, you can’t find much criticism of people or policies in the first editions of The Two Koreas.

Don was not interested in pushing a particular line, not obviously and certainly not personally. The story told itself, and if you pay attention to the final paragraph in each chapter of The Two Koreas, you’ll see clearly enough what Don thought the opportunities, or the looming dangers, were. But if there were lessons to be learned, they were meant to come from the events, not Don’s shading of them. History spoke for itself, and, as far as I know, he thought it should be the solid foundation for interpreting current events. There is much cant, unlimited bombast and rhetorical gas in public conversations these days on Korea. Don employed none of that. He didn’t need to in order to be effective.

In the first years of the George W. Bush Administration, Don and I talked frequently about Washington’s policies toward Korea. I took a jaundiced view. Don saw well-intentioned, thoroughly experienced people in key positions and thought they would work their way to sensible policies. We never fought over our differences; there was no need to fight with Don. I had my views, he listened; he had his views, I listened. People used to do that sort of thing.

For whatever reason—Don talked to a lot of people and paid close attention to events—by the time of the visit by Assistant Secretary of State James Kelly to Pyongyang in early October 2002, Don seemed no longer to think that things were moving in a reasonable direction. After the Kelly visit, he and former Ambassador Don Gregg went to Pyongyang to try to understand what had happened, why the situation had moved so abruptly to the very edge of the cliff, and whether it could yet be saved. They came back with a message from Kim Jong Il, seemingly ambiguous but, to a trained eye, meant to hold open the door to more talks between the two governments that might prevent the worst. According to Don’s account, the White House received them, listened with minimal interest to what they had heard in Pyongyang, and then ushered them out. It was, I suspect, a frustrating lesson even for a man who had observed the Washington policy machinery for many years.

In early 2011, Don and his wife Laura asked if I would update The Two Koreas. The previous, 2002 edition had concluded with the end of the Clinton administration, a time of optimism over what might be accomplished with Pyongyang, though a period still tempered with a sober understanding of the challenges that remained. By 2011, the situation had slid backward, very far backward. The North had exploded its first nuclear device in October 2006, and a second in 2009. It was fully embarked on a program to enrich uranium, almost certainly to open a new route for producing nuclear weapons. It had a second program to improve its missile delivery capabilities. Relations between the two Koreas were bad, as were those between Washington and Pyongyang.

When I noted that that publisher had put tough limits on the number of pages I could add to a revised edition, limits that would necessitate cutting some of his previous writing, Don said simply, “Cut whatever you need to cut.” I came over to his house often after that to report what progress I’d made, how the additional text might be organized, what themes seemed most important. There were always sandwiches for lunch, and cookies. Don asked questions, he listened, he offered a well-honed suggestion here and there. He never once gave anything that even remotely sounded like an order, or an indication of disapproval. We discussed how to approach the North Koreans in order to convince them to add their perspective to the book, and he signed a letter for me to give to them containing that request. He also gave me six boxes of his files.

In Don’s own gracious, patient way, he made clear—and I never doubted, not for an instant—that he was willing to hand over to someone else a good part of his life’s work and trust them to be true to it. He could no longer write it, but he wanted the story told, much as he would have done, of people and places and events that were the essence of another sad decade in the tragic tale of the two Koreas.

See the official obituary for Don Oberdorfer in the Washington Post, honoring his 25 year career as a diplomatic correspondent.