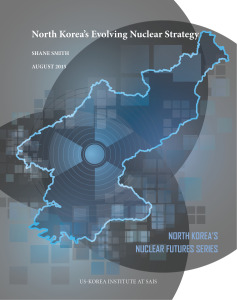 Over the past two decades, North Korea’s nuclear program has grown from a proliferation problem to a military threat to its neighbors and the United States. The country is now estimated to possess enough fissile material to build anywhere from six to about thirty nuclear weapons, depending largely on how much highly enriched uranium it has produced, and is poised to grow its stockpile, perhaps dramatically, over the coming years. North Korea has conducted three increasingly powerful nuclear tests since 2006 as well as a series of missile launches, suggesting to some that it could sooner or later target the US homeland. If that were not enough, the North has made excessively bold and even preemptive nuclear threats under the leadership of Kim Jong Un.

This paper offers an analytical framework for four alternative North Korean nuclear strategies: 1) a strategy aimed at extracting international political or diplomatic concessions; 2) a strategy aimed at internationalizing crises on the Korean peninsula in a way that triggers US and/or Chinese intermediation; 3) a retaliatory strategy to deter regime-threatening attacks; and 4) a nuclear war-fighting strategy to offset conventional weaknesses vis-à-vis South Korea and the United States. The paper then assesses the limited evidence about North Korea’s nuclear strategy—where it has been and where it is going.