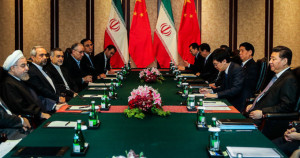 s spread in July of the freshly brokered multilateral plan on Iran’s nuclear program, some observers began to speculate that a North Korean nuclear deal might come next.[1] Analysts pinned their hopes on China, as in past moments of optimism, when they suggested that the North Korean ally might be able to help reanimate the Six Party process.

As China joined with Iran and five other powers in Vienna to unveil the so-called Joint Comprehensive Plan of Action, the culmination of years of painstaking diplomacy, Beijing appeared to encourage these expectations. In comments following the announcement, Chinese officials not only highlighted Beijing’s crucial role in bringing the talks to their successful conclusion, but they also suggested that the success of the negotiations held lessons for a new round of nuclear talks with Pyongyang. In an exchange with UN Secretary-General Ban Ki-moon after the Iran deal’s announcement, Chinese Foreign Minister Wang Yi reportedly described the Iran talks as “a positive reference for coping with other international and regional hot spot issues, including the nuclear issue on the Korean Peninsula.”[2] Wang’s comments were echoed in a People’s Daily commentary—published under the name “Zhong Sheng” (“Voice of China”), a pseudonym often used to convey official Chinese positions on foreign policy—which described the deal with Iran as a “message of hope” to the world.[3]

Should official Chinese statements be understood as a signal that new nuclear talks with its neighbor and ally are on the horizon? The South Korean and US envoys to the Six Party process both visited Beijing in the week or so following the adoption of the agreement by the United Nations on July 19, and their trips could be read as promising signs. But in both Chinese universities and government-affiliated think tanks, Chinese experts who focus regularly on North Korea’s nuclear program have not aligned behind their government’s propositions: that the Iran agreement provides an opening for nuclear negotiations with North Korea, and that the Iran process holds lessons for reaching a deal with Pyongyang. As informed opinion, analyses by Chinese experts offer insights into how Beijing may assess the challenges and opportunities presented by international developments, or they may even be indicative of internal policy debate. Commentaries by elite observers may also be seen as policy tools in the sense that they can be used to help set public expectations for policy outcomes.

Only a handful of substantive commentaries on the Iran deal’s implications for North Korea have circulated in Chinese public fora to date, possibly indicating that a silent majority of China’s North Korea watchers disagree with the optimistic official line. At the time of writing, the most prolific among China’s expert observers of Korean peninsula affairs have not published assessments, but several experts from leading Beijing-based think tanks have shared their views. Shi Yongming, an associate research fellow in the China Institute of International Studies, a think tank affiliated with China’s Ministry of Foreign Affairs, makes familiar arguments about the barriers he sees Washington’s policies presenting to Iran-style negotiations with North Korea. In his commentary in the Beijing Review, Shi points to Washington’s requirements that Pyongyang abandon not only its nuclear weapons, but also its right to develop its own civilian nuclear energy program. He argues that tensions from the “hegemonic logic” of US interactions with the region, as well as US-Japan military integration and the ongoing threat of the use of force by the US against North Korea, all distinguish the North Korean case from that of Iran. Shi argues that the North Korean experience with International Atomic Energy Agency (IAEA) inspections offers a cautionary tale for Iran. The inspections, in his view, led to intolerable intrusions by Washington, ultimately causing the collapse of the 1994 Agreed Framework.[4]

In an opinion piece for the Financial Times (Chinese-language edition), an associate at the Carnegie-Tsinghua Center for Global Policy argues on different grounds that the Iran deal offers few lessons for the North Korean nuclear issue. Zhao Tong, whose research center at China’s Tsinghua University includes both international and Chinese experts, contends that the two countries’ nuclear programs are fundamentally different. Because Iran had not developed nuclear weapons and had long declared that was not the endgame of its uranium enrichment program, negotiations with Tehran could focus on how to regulate Iran’s civilian nuclear capacity. This is not possible in the case of North Korea, which is already a self-declared nuclear state, a status it has enshrined in its constitution. Pyongyang has also declared that it will not relinquish its nuclear weapons. In Zhao’s view, new multilateral negotiations appear unlikely not only due to a lack of will on the part of Washington to improve political relations with Pyongyang, but also due to Pyongyang’s own resistance to steps that would improve the security environment on the peninsula.[5]

Wang Junsheng of the Chinese Academy of Social Sciences (CASS), a prominent Chinese think tank serving the State Council, acknowledges arguments made by many other Chinese experts on Washington’s role in Iran-style talks, including the view that the Obama administration lacks incentives to press for a breakthrough with North Korea. A widely held view is that the Iran deal and the normalization of US-Cuba ties represent a sufficient diplomatic legacy for President Obama. Moreover, since North Korea lacks Iran’s geopolitical heft, many argue that the US has scant inducement to adjust its policy of “strategic patience”—particularly when the threat from Pyongyang helps Washington to justify policies associated with its pivot to Asia, while further cementing its alliances with Seoul and Tokyo. In addition, many argue that the short time left in President Obama’s tenure makes it less likely that his administration will undertake an ambitious new diplomatic initiative.[6] Despite these factors, Wang contends that Washington does want to leverage the new atmosphere to achieve something positive with North Korea—if North Korea will do something to break the deadlock. Wang sees signs of flexibility on the part of Kim Jong Un, but the analyst is only cautiously optimistic. He notes that the regime has pointedly rejected Iran-style talks and has focused its recent diplomatic energy on achieving international recognition as a nuclear weapons state. Wang observes that a recent tribute by Kim to Chinese soldiers who died in the Korean War[7] may indicate that North Korea’s leader hopes to improve his strained relations with Beijing, but the expert adds that it should not be seen as anything more—it is not a sign that North Korea is willing to explore new talks. In Wang’s view, a more meaningful portent that a shift in the deadlock on nuclear talks could be possible was Kim’s decision on whether to travel to Beijing for China’s commemoration of the 70th anniversary of the end of World War II. Had Kim joined the celebration, it would perhaps have signaled a willingness to return to talks. [8] After the publication of Wang’s commentary, however, Pyongyang announced that Kim had decided against attending the September 3 event. Meanwhile, South Korean President Park Geun-hye did join the celebrations in Beijing, where she and Chinese President Xi Jinping issued a joint statement pledging to work together to persuade Pyongyang to abandon its nuclear program. The leaders also called for a resumption of the Six Party Talks, which reports suggest will be an agenda item on the trilateral summit between China, Japan, and South Korea to be scheduled for later this year.[9]

Each of these Chinese experts offers a skeptical take on the Iran deal’s ability to serve as a bellwether of potential progress on the North Korean nuclear issue. Moreover, their skepticism is consistent with the growing frustration expressed by China’s North Korea watchers over the threats that Pyongyang has posed to China’s security and reputation, and with the pessimism shared by those experts about the prospects for North Korean denuclearization. As Beijing has relaxed controls over Chinese discourse on North Korea, some of China’s North Korea watchers continue to hold firmly to the view that China must maintain its traditional “lips and teeth” relationship with North Korea on historical and ideological grounds. Others, including some of China’s best known scholars on international security and strategy, have gone so far as to recommend that Beijing reassess its traditional alliance relationship with Pyongyang. To date, however, Beijing has not fundamentally reframed its policy toward its neighbor. Beijing’s posture continues to rest heavily on the hope that North Korea can be persuaded that its interests are best served by eschewing provocative actions detrimental to China’s interests and regional security while resuming talks on a peaceful process of denuclearization and reengaging more broadly with the international community.