Recent commercial satellite imagery of Sohae Satellite Launching Station (“Tongchang-ri”) confirms 38 North’s previous assessment that a long-range rocket launch is unlikely on or before the 70th anniversary of the Workers’ Party of Korea (WPK) on October 10. Moreover, ongoing construction activities—including the discovery of a new fuel and oxidizer storage site nearing completion adjacent to the gantry tower—and the absence of any visible preparations for a launch indicate it is increasingly unlikely that a test will be conducted this month.

No Launch-Related Activity at the Launch Pad

Imagery from October 4 indicates that there is no rocket at the gantry tower nor are there any discernible launch preparations. Rather, there appears to be mud on the launch pad concrete possibly created by trucks moving to and from a new construction site. A probable large dump truck at the site appears to be waiting for a load of dirt to carry away. If launch preparations were underway, such construction activity and vehicle traffic would not be expected so close to October 10.

Examining the October 4 imagery, new fuel and oxidizer storage buildings have been discovered near the old structures adjacent to the launch tower. Construction of the new structures began in November 2014 when ground was first broken and foundations and walls partially erected. The wall and beam structure of these buildings is similar to those under construction at the engine test stand. After a hiatus until May 2015, construction began again and was completed by August. Earthen berms were placed around the structures and a layer of earth appears to have been spread over their roofs.

Whether these new structures will be used for the storage of additional fuel and oxidizer or for more volatile propellants remains unclear. However, their construction is just one more piece of evidence that the North is planning to launch larger more capable space launch vehicles (SLV) that will either need greater quantities of fuel and oxidizers or more volatile mixtures.

The proximity of a new construction area across the road may indicate that Pyongyang is in the process of building additional structures, also for fuel and oxidizer storage. However, it is not possible to state this for certain, given the early stage of the new work.

The new imagery provides the first view of the south face of the movable transfer structure, confirming that all four walls are similar with what appear to be translucent panels that allow in daylight for interior illumination. Because of limited imagery resolution, it does raise the question of how this south face opens up to allow gantry tower access to a launch vehicle stage inside in order to stack it on the launch platform. Logically, the best explanation is that there is a roll up door, as is often done for aircraft hangars that open from the bottom to the first part of the roof. If this is the case, the gantry tower crane can directly hoist the launch vehicle segment inside onto the launch platform. While limited resolution of the imagery prevents confirmation of the explanation, the south face must somehow open up.

The October 4 image shows that three of the four new buildings at the Engine Test Stand probably intended to store fuel and oxidizer are externally complete. Work on the fourth structure’s roof is continuing. Earthen berms have been completed for two of the buildings and they appear to have a layer of dirt over their roofs, similar to the structures discovered near the gantry tower at the launch pad.

There appears to be building material and equipment laid out in the open area leading to the engine test stand. This may indicate that work is continuing on the first three buildings. 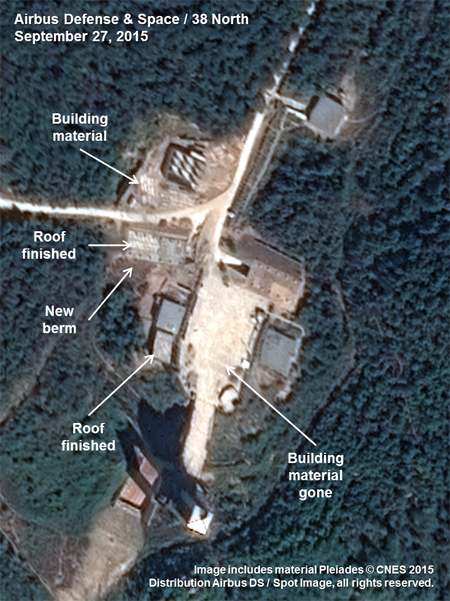 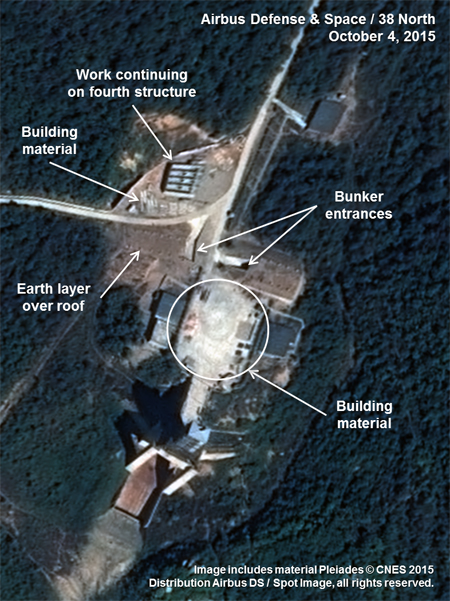