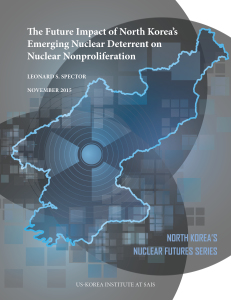 The emergence of North Korea’s nuclear deterrent has been a grievous blow to international nonproliferation efforts and poses serious national security challenges for the United States and its Northeast Asian allies. It is by no means clear, however, that the precedent North Korea has set will significantly erode the nonproliferation regime or stimulate proliferation elsewhere.

This paper will identify a number of arenas where North Korea’s becoming a nuclear weapons possessor state might be expected to have significant negative consequences, and it will assess the damage likely to be done. As will be seen, the ripple effects of North Korea’s crossing the nuclear threshold may be more limited than they first appear.

*This report was modified on November 6, 2015 to clarify an ambiguity in the article.