The sun is a miasma
Of incandescent plasma
The sun’s not simply made out of gas
No, no, no
The sun is a quagmire
It’s not made of fire
Forget what you’ve been told in the past 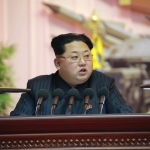 Five years ago, I opened an article about the possibility of a North Korean thermonuclear weapon with a few lines from a song record by They Might Be Giants, Why Does the Sun Shine?

Two things I did not realize at the time. First, it was a cover—the song was actually written by Hy Zaret, who is more famous for Unchained Melody, a.k.a. that song from Ghost with the pottery wheel. Second, Zaret should stick to scoring Demi Moore romance movies; the science is wrong. It’s really not an excellent description of the composition of the sun. TMBG recorded a correction, Why Does the Sun Really Shine. Take a listen.

With that out of the way, what else should we revisit about the subject of North Korea’s “H-bomb”?

The subject is in the news again. Kim Jong Un visited a North Korean historical site and, according to KCNA, noted that the country was “a powerful nuclear weapons state ready to detonate self-reliant A-bomb and H-bomb to reliably defend its sovereignty and the dignity of the nation.”

Obviously, this is propaganda. Kim was visiting a historical site known as the birthplace of North Korea’s domestic armaments industry. It wouldn’t be surprising if such a visit was an occasion for Kim to embellish the status of the Juche Bomb a bit, as he traced the evolution of North Korea’s arms industry from its humble beginnings.

But it also follows other statements over the past five years when North Korean flunkies and officials have hinted at a thermonuclear weapons capability. Most recently, the DPRK Ambassador in London claimed, in prepared remarks, that North Korea had weapons ten times as powerful as the ones that had been tested. Given that such speeches are often prepared by local embassy staff, amalgamating previously published statements, it seemed unwise to draw too strong an inference at the time. But the idea of a North Korean H-bomb has been floating around for a bit.

Technically, a few words of caution are in order. Building a staged thermonuclear weapon—one in which the radiation from a fission primary compresses a secondary stage of thermonuclear fuel—would seem to be a bit of a stretch for the North Koreans. That is the sort of device one normally thinks about when someone says “H-bomb.” Thermonuclear weapons are tricky; making one work requires a bit of test experience. While the North Koreans finally conducted an unambiguously successful nuclear test in 2013, the 2006 and 2009 tests were less so.

A more technically plausible scenario is that North Korea might be experimenting with fusion fuels, such as deuterium or lithium, to boost the yield of a fission explosion. Pretty much every country that builds nuclear weapons looks at using fusion fuel to boost the yield of a device. China, for example, burned lithium-6 in its third test, conducted less than two years after its first nuclear test in October 1964. China was committed to developing a staged thermonuclear device, something it accomplished with its fifth and sixth nuclear tests in 1966 and 1967. Pakistan tried to purchase a tritium separation line, something AQ Khan claims it did successfully. Even South Africa had a program to look at boosting its gun-type devices for missile delivery, going so far as to import tritium from Israel.

In 2010, I noted that we had little evidence that the DPRK is interested in boosted nuclear weapons or staged thermonuclear devices beyond the May announcement that it had conducted fusion related experiments. Since then, the DPRK propaganda apparatus has made only a few mentions of fusion, all apparently references to the 2010 announcement. Typical, for example, are statements that North Korea was a “socialist powerhouse” because “eye-catching successes were registered in space, nuclear fusion, CNC and other scientific and technological fields and a lot of edifices built throughout the country.”

There has not been much evidence to document the DPRK’s interest in boosted weapons since then, although David Albright points out that North Korea has installed or renovated irradiation channels in the core of the gas-graphite reactor at Yongbyon, which might indicate tritium production. (Carey Sublette has noted that similar channels were visible in the images of the now-destroyed Al Kibar reactor that North Korea assisted Syria in constructing.)

While it is best to treat DPRK propaganda with some skepticism, it is also important to note that the North has now had a nuclear weapons program for more than 20 years. This program has yielded three nuclear tests. North Korean nuclear scientists have access to their counterparts in Pakistan, possibly Iran and maybe a few other places. We should not expect that they will test the same fission device over and over again.

I teach a class on the evolution of China’s nuclear weapons program at the Middlebury Institute of International Studies, which compares declassified US intelligence estimates to historical and other materials now available. One of the major themes of the early part of China’s nuclear program is how committed China was to matching the other nuclear powers in the possession of intercontinental-range ballistic missiles armed with multi-megaton thermonuclear weapons. A lot of Americans had trouble accepting this idea. We thought of China as being too backward to have such aspirations. That was, I argue, precisely why China wanted such weapons: because China’s communist leaders had a different vision of China’s place in the world and the development of thermonuclear weapons was a way of achieving that vision.

I think something similar is happening with North Korea. We think of the country as impoverished, both in terms of economy and leadership. Well, that’s not how the government in North Korea sees itself—and anyone who does, keeps such thoughts to himself. Pyongyang’s propaganda apparatus argues—and this is what Kim was saying—that North Korea is a technological powerhouse. The North Korean propaganda line argues that this power is demonstrated by a series of achievements culminating in space launches, nuclear weapons and, yes, even thermonuclear weapons.

So, while a staged thermonuclear weapon is likely more than North Korea can, at the moment, achieve technically, it is a mistake to rule out the aspiration by Pyongyang. An H-bomb might not conveniently fit our perception of North Korea, but perhaps that is Kim’s point.